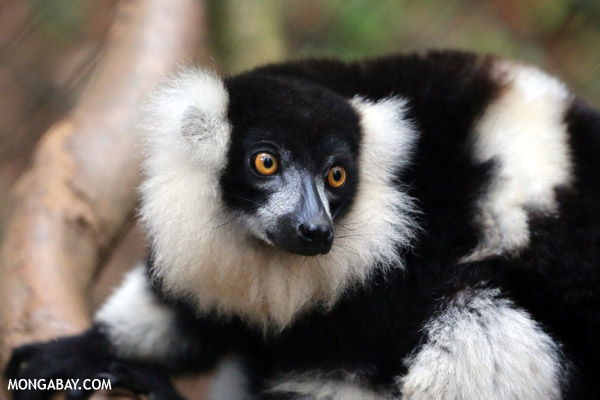 Due to the wonderful idiosyncrasies of evolution, there is one country on Earth that houses 20 percent of the world’s primates. More astounding still, every single one of these primates—an entire distinct family in fact—are found no-where else.

The country is, of course, Madagascar and the primates in question are, of course, lemurs. But the far-flung island of Madagascar, once a safe haven for wild evolutionary experiments, has become an ecological nightmare.

Overpopulation, deep poverty, political instability, slash-and-burn agriculture, illegal logging for lucrative woods, and a booming bushmeat trade has placed 94 percent of the world’s lemurs under threat of extinction, making this the most imperiled mammal group on the planet.

But, in order to stem a rapid march toward extinction, conservationists today publicized an emergency three year plan to safeguard 30 important lemur forests in the journal Science.

Conservationists say that the current environmental crisis in Madagascar is of international importance, not least because this is the only place on Earth that houses an entire family of primates, found no-where else.

“[Lemurs] represent an entirely unique lineage of primates, long isolated from the monkeys and apes that evolved on the continents,” co-author Steig Johnson with the University of Calgary explained, adding, “they represent a disproportionate amount of the biodiversity (other mammal groups and even birds are not very numerous in Madagascar).”

Moreover, lemurs play vital roles in the health and biodiversity of Madagascar’s remaining forests through dispersing seeds and pollination. They represent classic keystone species on the island.

“Virtually each of Madagascar’s unique habitats and ecosystems has a unique set of lemur species. Moreover, many lemurs are dependent on a large variety of endemic food plants,” co-author Rainer Dolch, the head of the local community conservation group, Association Mitsinjo, told mongabay.com. “Protecting lemurs would therefore ensure the conservation of the habitats and ecosystems where they occur, including most of Madagascar’s other unique animal and plant species.”

Although lesser-known than megafauna like tigers and elephants, lemurs international profile has risen in recent years due to wildlife documentaries, popular animated films, and new discoveries.

“Madagascar—and the world—will undoubtedly be much poorer without them,” said Schwitzer.

Despite being regulated to a single island, lemurs are a big family. By the early 1990s, scientists had identified around 50 species of lemur. But as taxonomists turned to genetic studies, scientists found that lemur diversity was even higher than expected. Today, 101 species of lemur have been described, many locked into small forest fragments under siege by the dominant primate on the island: homo sapiens. As more species were uncovered—and forests continued to fall for agriculture and fuel—the percentage of lemurs threatened with extinction also skyrocketed. While at least 17 lemurs have gone extinct since humans arrived on the island, none have vanished in the last few hundred years.

However the situation worsened when Madagascar suffered a political coup in 2009, throwing the country into chaos: foreign aid fled, forests (already under pressure) were fragmented, and locals increasingly turned to hunting lemurs for protein, a practice little known until this decade.

“Protected areas have not been spared [the political crisis]; for example, armed timber poachers extracting valuable hardwoods targeted Masoala and Marojejy National Parks in the northeast once local law enforcement broke down,” write the paper’s authors, which include 19 lemur experts. “Foreign demand, as well as political turmoil and corruption, drive these destructive, and often unlawful, activities.”

But the political coup, and resulting instability, only exacerbated issues that have long been present in the country. The most important is deforestation.

“Madagascar has the highest per-capita rice consumption in the world. The traditional way to grow rice in Madagascar is by shifting (slash-and-burn) agriculture…In the past, with a low human population density and lots of forest, this practice was sustainable,” Schwitzer told mongabay.com. “Today, with 21 million Malagasy and only 10–20% of the island covered by forest, shifting agriculture has become unsustainable.”

The human population in Madagascar is currently growing at a rapid clip of 2.8 percent annually, this in a country that many observers have already said is suffering from overpopulation. Although Johnson says the “picture is more complicated than that.”

“Madagascar is a country that is still unbelievably rich in natural resources, with a very large total land area,” he told mongabay.com. “The problems of population pressure are most seriously felt at the local level—in close proximity to remaining natural forests—and when corruption, economic inequality, and poverty combine to encourage unsustainable, often illegal exploitation of natural resources.”

Indeed, Madagascar is one of the poorest country’s on Earth, with more than 90 percent of the population surviving on less than $2 a day and about 50 percent of children under five suffering from malnutrition.

This extreme poverty, combined with political instability and cultural shifts, have led to lemur poaching at “unprecedented scales, even inside protected areas,” noted Schwitzer. The poaching has even gone commercial with grilled lemur served as snacks in some restaurants and bars.

The paper’s authors warn that “in several parts of the northeastern rain forests, large-bodied indris (Indri indri) and diademed sifakas (Propithecus diadema) are in danger of being extirpated.”

Given these country-wide problems, it’s no wonder that the entire lemur family is imperiled. But the scale is still hard to fathom: 22 lemur species are currently listed as Critically Endangered by the IUCN Red List, another 48 are considered Endangered. Some species at the very edge: the northern sportive lemur northern (Lepilemur septentrionalis) is down to less than 20 individuals in the wild.

In addition to all the threats they face, a simple lack of awareness in the general public has been crippling, according to Dolch.

“I am always amazed about how little the general public appears to know about the world in general and the natural world in particular,” he said. “First and foremost, the public media should take their mandate seriously and comprehensively inform the people to help shape public opinion.”

Lemur champions aren’t ready to give up. Amidst such staggering statistics, they say there are still positive trends and lemurs could be brought back from extinction, but only if the government, donors, and conservationists take immediate action.

Arguably the most positive recent trend in Madagascar is that even in the midst of a government coup, ongoing instability, and deepening poverty, tourists kept flocking to see the country’s famed biological treasures.

“Tourism has held up as one of the country’s biggest foreign exchange earners,” Schwitzer said. In addition, Madagascar is home to a number of well-established biological research stations and has several notable scientists and conservationists working in the country.

Also, the political situation may finally be taking a turn for the better: last December, democratic elections brought about the election of former finance minister, Hery Rajaonarimampianina.

“There are encouraging signs that the new president will set the conditions for a return to effective governance and resumption of international aid,” the scientists write.

The President of Conservation International and co-author of the paper, Russell Mittermeier, says talks with Rajaonarimampianina have already proven fruitful.

“During a recent meeting….we discussed lemur conservation and ecotourism, the rosewood trade, and the importance of Madagascar’s biodiversity as its most visible and important global brand and key element in long-term human well-being and poverty alleviation,” he said, These were all issues about which he was already well-informed. As a result, I am feeling optimistic about Madagascar for the first time since early 2009.”

To this end, Schwitzer and his colleagues have put together a 3-year action plan from 2013-2016 in a bid to staunch the decline in lemur numbers. The conservationists started by selecting where resources were needed the most.

“We have identified 30 priority areas across Madagascar based on the number of lemur species present, the level of endangerment of those species, as well as whether there are species restricted entirely to those sites,” explained Johnson. “Scientists and conservationists active in these sites then set about proposing activities to confront the most important local threats.”

Each site has an individual plan incorporating local needs, but Schwitzer said “three proposed measures span through all of them as a red thread: promoting and expanding ecotourism; the creation of protected areas managed at the community level; and sustaining and expanding long-term research presence in critical lemur sites.”

One of the most important initiatives, according to the researchers, is creating new community-managed protected areas.

“This means empowering local communities, whose livelihoods depend on these natural systems, to manage new protected areas with the goal of preserving biodiversity and maintaining ecosystem services (such as providing medicinal plants, clean drinking water, and other benefits from intact forests),” explained Johnson.

But how much will all this cost? Individual site plans range from $500,000 to $50,000 with a total price tag of around $7.6 million. The authors call this a “reasonable amount in terms of international aid, for an incalculable return.” Indeed, the cost is nearly 40 times less what was raised for tigers during an international summit in 2010.

“We are hoping to raise these funds from every level, starting with governments, trusts and foundations, all the way down to private lemur lovers,” Switzer said. “The action plan is set up such that people can read the 30 different site-based strategies and pick one or more they would like to fund. Every site has an itemized budget that can be downloaded from the Primate Specialist Group website (www.primate-sg.org). People can then contact the main actors of these sites directly (contact details are included in the action plan).”

The scientists argued that if implemented such a plan could prevent the extinction of any lemur species over the next decade, and build a base for longterm conservation success.

But the scientists say that it’s not just big donors, NGOs, and governments that can help Madagascar keep lemurs safe.

“I would encourage everybody who can afford it, to go and visit Madagascar, and see as many different lemurs and protected areas as possible,” Schwitzer told mongabay.com. “Another way of helping would of course be donating money towards the goals of the action plan. And talking about lemurs and the crisis they are facing, be it on Facebook, Twitter, blogs, anywhere, really. The more people talk about the need for more effective lemur conservation, the more action we will hopefully see from the Malagasy government, helped by the international donor community.” 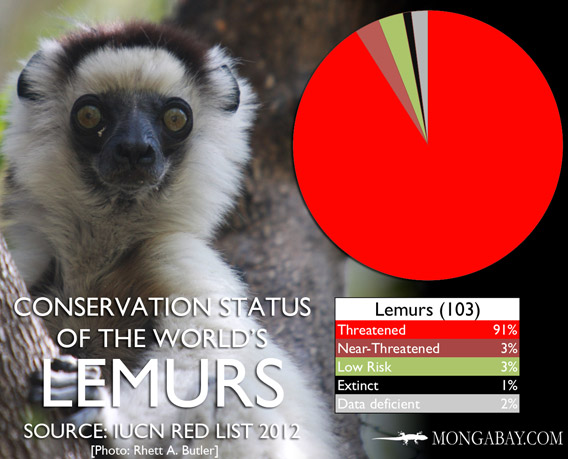 We must never give up the doing everything in our power to conserve the incredible diversity of this country. If visiting Madagascar is not on your itinerary, put it on. Support those on the ground that are working so tirelessly to preserve not only the lemur species, but also the myriad of other unique creatures and plants.

Very interesting and very timely article, maybe there is still hope for Madagascar?