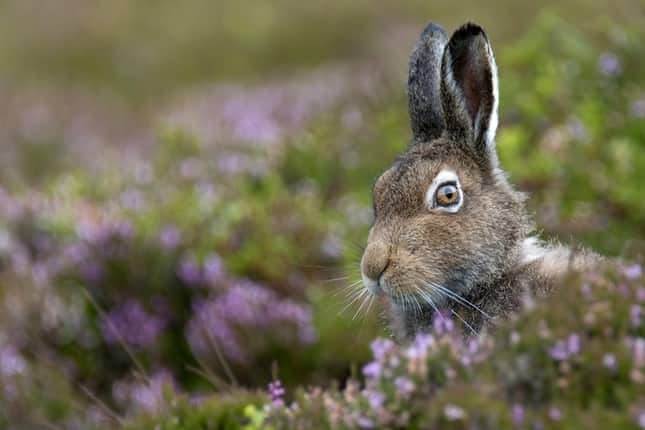 Culling by grouse moor managers is being blamed for the drastic decline of mountain hares on eastern Scottish moorlands to less than 1% of the level recorded more than 60 years ago.

A long-term study by the Centre for Ecology & Hydrology and the RSPB analysed counts of the animals on moorland managed for red grouse shooting and nearby mountain land.

From 1954 to 1999 the mountain hare population on moorland sites decreased by nearly 5% every year, which ecologists attributed to the planting of conifer forests on former grouse moors. But from 1999 to 2017 the scale of the moorland declines increased dramatically to over 30% every year, leading to counts in 2017 of less than 1% of original levels in 1954.

In recent decades, red grouse have been hit by the louping ill virus, which is transmitted by sheep ticks. Mountain hares have been implicated in the spread of the disease and so their culling intensified in the 1990s, even though scientific studies have found no compelling evidence that it helps control the virus. Earlier this year it was revealed that up to 38,000 mountain hares are killed on Scottish estates each year.

Dr Adam Watson, an ecologist for the Centre for Ecology & Hydrology who has been studying mountain hares for 75 years, said: “Having counted mountain hares across the moors and high tops of the eastern Highlands since 1943, I find the decline in numbers of these beautiful animals both compelling and of great concern. We need the Scottish government and Scottish Natural Heritage to take action to help these iconic mammals of the hill – I hope they will listen to the voice of scientific research.”

The paper published in the Journal of Applied Ecology found that long-term declines associated with conifer planting were least severe in areas where there was heather burning as part of grouse moor management. Burning the heather removes the old woody plants, and allows young, tasty shoots to grow, providing improved nutrition for both grouse and hares.

But the study found that changed after 1999, with the most marked mountain hare declines on grouse moorland. On higher, alpine sites, numbers fluctuated but increased overall until 2007 and then declined, although not to the unprecedented lows seen on moorland sites.

Gamekeepers and estate managers claim the unregulated mountain hare culls limit the spread of ticks, protect trees and safeguard fragile environments, and a policy of voluntary restraint is in place.

According to the Scottish Moorland Group, which represents grouse moor owners, mountain hare culling is sustainable with between 7% and 14% of populations shot, and hare populations remain in good health on grouse moors.

David Noble, chairman of the Game and Wildlife Conservation Trust in Scotland, said data gathered by the GWCT over the same period as the study does not suggest such a decline in hare numbers on grouse moors.

“Our counts in recent years have found robust hare populations close to where this paper appears to be reporting very few,” he said. “Now this paper is published we look forward to reviewing it, especially how the counts were made, because assessing hare numbers accurately is challenging.”

The Scottish government is to review grouse moor management next year and Noble called for a coordinated count of mountain hares to better safeguard local populations. He added: “It is also important the grouse moor community take on the challenge of assessing hare numbers themselves and does not ignore public concerns about the culling of this charismatic species.”

The RSPB said urgent action is needed to protect mountain hares. Duncan Orr Ewing, head of species and land management at the charity in Scotland, said: “We consider that large-scale population reduction culls are both illegal under EU law and unwarranted as a method for controlling grouse disease.

“Management of this species should now be more tightly controlled by Scottish Natural Heritage to safeguard mountain hare populations.”

This article was first published by The Guardian on 14 Aug 2018.