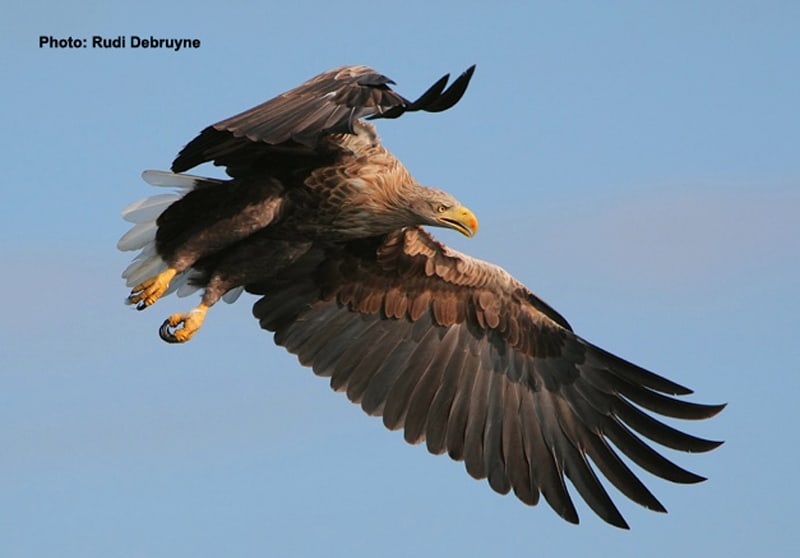 2011 has proved another record breaking year for breeding pairs of Scotland’s largest bird of prey. White-tailed eagles soared to new heights despite heavy storms throughout the 2011 breeding season.

Conservationists, and many sea eagle enthusiasts, had been concerned that the high winds felt across Scotland in May could have had a detrimental impact on breeding white-tailed eagles at the vulnerable part of the season when most nests contain small chicks. Indeed, some nests failed including that of BBC Springwatch star, nicknamed “Itchy”, who experts fear lost his chicks in the storm.

However, the bad weather failed to blow the species off course. Recent survey figures for the 2011 breeding season reveal that there were 57 territorial pairs in Scotland, an increase of 10 per cent on the previous year. A total of 43 young fledged successfully from these nests.

White-tailed eagles finally became extinct in Britain at the beginning of the twentieth century, due to human persecution and collecting of eggs and skins. After an absence of over half a century, a reintroduction programme began in 1975 on the Isle of Rum in the Inner Hebrides, aimed at returning these majestic raptors to the Scottish skies.

Since then, the species’ population has been steadily recovering, and conservationists believe there are now as many “flying barn doors,” as they are affectionately known, in the UK as there were over 150 years ago.

An adult bird has an impressive eight-foot wing-span and striking white tail, making the white-tailed eagle a spectacular sight, and a tourist magnet for areas such as Mull and Skye. On Mull alone, white-tailed eagles, sometimes referred to as “sea eagles”, boost the local economy by over £5 million every year.

The successful breeding season on the west coast comes as a further 16 white-tailed eagle chicks, generously gifted by the people of Norway, were released from a secret location in Fife in August.

The chicks are part of a six-year project, now entering its final year, to increase and expand the range of this iconic species into its former haunts in the east of Scotland.

Duncan Orr-Ewing, Head of Species and Land Management at RSPB Scotland, said: “The white-tailed eagle is part of Scotland’s rich natural heritage and it is fantastic to see them back where they belong and gradually increasing in numbers and range on the west coast. They are improving biodiversity in this country and bringing in important economic benefits to the communities they soar above.

“Now with the east coast reintroduction entering its final year, we are anticipating the first steps towards the establishment of a breeding population of sea eagles on the other side of Scotland. There is plenty of suitable habitat and natural wild prey to support a healthy population.”

Ron Macdonald, Head of Policy and Advice for Scottish Natural Heritage, one of the main partners and funders of the white-tailed eagle reintroduction projects, and joint funders of the monitoring of the west coast birds, said: “The continued success of the white-tailed eagle reintroduction in Scotland is great to see, particularly the successful 2011 breeding season which occurred despite a cool and wet spring.

“More and more people are now getting a chance to see these big birds of prey soaring over our countryside, increasingly in areas close to our villages, towns and cities. In addition to inspiring people with the sheer grandeur of their flight, they also contribute to the growth of nature based tourism in Scotland.

“Latest published figures show that the direct economic value to Scotland of nature based tourism is £1.4 billion per year, so the more we can do to promote our wonderful wildlife the better it is for jobs too.”

This post was written by The Royal Society for the Protection of Birds, a charity registered in England and Wales no 207076, in Scotland no SC037654.