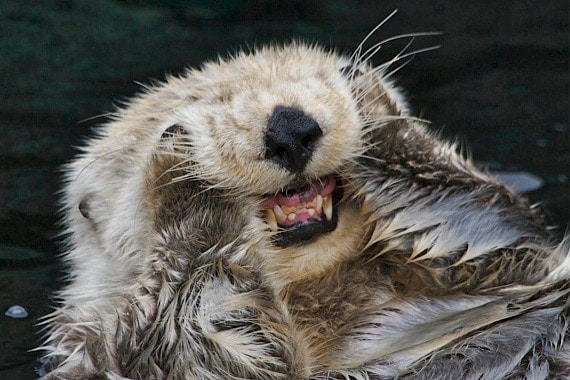 Sea otters, which often dine on clams, crabs, and other shelled creatures, have unusually chip-resistant teeth, a new study suggests.

Lab tests show that the enamel coating the teeth of sea otters (Enhydra lutris, shown) is up to two-and-a-half times tougher than human tooth enamel, thanks largely to the enamel’s microstructure.

In all mammal enamel, the tiny crystals of calcium phosphate that give the tooth’s surface its hardness are separated by thin layers of protein-rich gel that help prevent cracks from propagating.

Interestingly, the researchers report online today in Biology Letters, previous studies have found that the early hominin, or member of the human family, Paranthropus boisei—which lived in Africa between 1.2 million and 2.3 million years ago and has been nicknamed “Nutcracker Man” due to its large, thick-enameled molars—also had about 19 of these crack-arresting layers of protein gel per millimeter of enamel.

That spacing suggests that P. boisei’s teeth may have been more chip-resistant than scientists have previously recognized, which may in turn revamp notions about the diet of these early humans.

This article was first published by NewsScienceMag.org on 14 Oct 2014.

Love sea otters Thank you for the article.