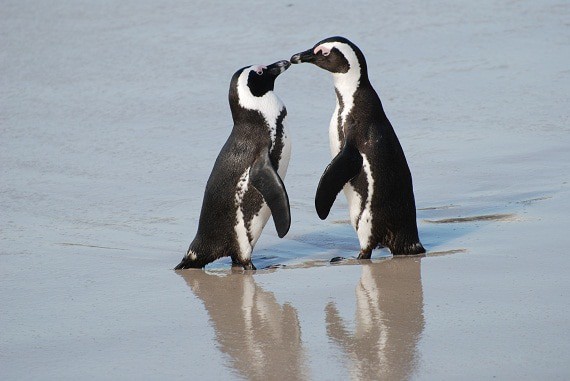 African penguins communicate feelings such as hunger, anger and loneliness through six distinctive vocal calls, according to scientists who have observed the birds’ behaviour in captivity. The calls of the “jackass” penguin were identified by researchers at the University of Turin, Italy. Four are exclusive to adults and two are exclusive to juveniles and chicks.

The study, led by Dr Livio Favaro, found that adult penguins produce distinctive short calls to express their isolation from groups or their mates, known as “contact” calls, or to show aggression during fights or confrontations, known as “agonistic” calls. They also observed an “ecstatic display song”, sung by single birds during the mating season and the “mutual display song”, a custom duet sung by nesting partners to each other.

Juveniles and chicks produce calls relating to hunger. “There are two begging calls; the first one is where chicks utter ‘begging peeps’, short cheeps when they want food from adults, and the second one we’ve called ‘begging moan’, which is uttered by juveniles when they’re out of the nest, but still need food from adults,” said Favaro.

The team made simultaneous video and audio recordings of 48 captive African penguins at the zoo Zoom Torino, over a 104 non-consecutive days. They then compared the audio recordings with the video footage of the birds’ behaviour. Additional techniques, including visual inspection of spectrographs, produced statistical and quantifiable results. The research is published in the journal PLOS One.

“Vocal communication allows us to understand the many different aspects of the biology of this species,” said Favaro. “Penguins have less sophisticated vocal mechanisms compared to song birds, but they have very sophisticated mechanisms to encode information in songs.”

The birds, native to the coasts of South Africa and Namibia, are known locally by the unflattering name jackass penguins because of their donkey-like grunts – the ecstatic display song.

With declining numbers in the wild, in 2010 the International Union for Conservation of Nature classed the species as endangered.

This article was written by Nishad Karim for The Guardian.