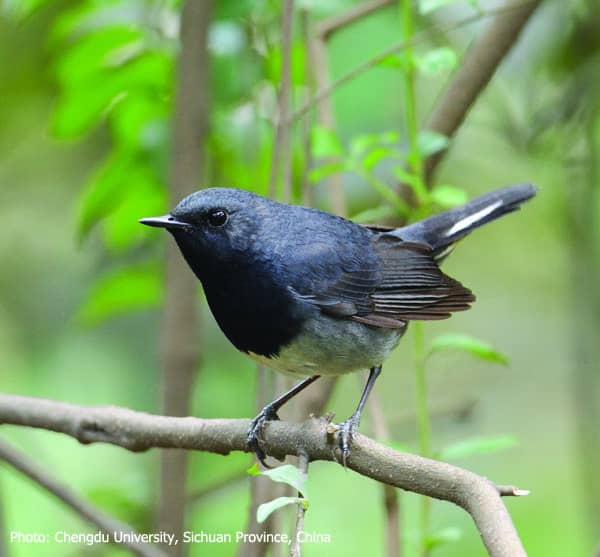 In June 2011, a team of Chinese and Swedish researchers rediscovered the breeding area for the poorly known Blackthroat Luscinia obscura, in the Qinling mountains, Shaanxi province, north central China.

Seven singing males were observed in Foping and seven more in Changqing National Nature Reserves — which almost equals the total number of individuals observed of this species since its discovery in the late 19th century. Nearly all of the birds were on mountain slopes at 2400-2500 meters above sea level in large, dense expanses of bamboo in open coniferous and mixed coniferous-broadleaved forest.

In the late 19th and early 20th centuries, about 10 Blackthroats were collected at two localities in the Gansu and Shaanxi provinces during the breeding season (May-August). Since then, there have been only a handful of mostly unconfirmed records from Sichuan and Yunnan provinces, China, from presumed breeding areas or on migration, including a few individuals found in bird markets. The most recent record is of a bird that was photographed on migration in the campus of the Sichuan University on 2 May 2011. In addition, one individual has been caught in Thailand in winter.

The Blackthroat resembles a European Robin Erithacus rubecula in size and general appearance, but with a jet black throat and breast in the male. The female is considered to have a pale brownish throat and breast, although no females definitely attributable to this species have been observed.

The song is distinctive, and consists of rather short, quick, varied strophes that include both whistles and harsh notes. The strophes are delivered at a fairly slow, even pace. Several individuals were sound recorded in 2011, and two of these recordings are now made freely available. This will facilitate future surveys of this enigmatic bird species.

The above story is reprinted from materials provided by Expertanswer, via AlphaGalileo