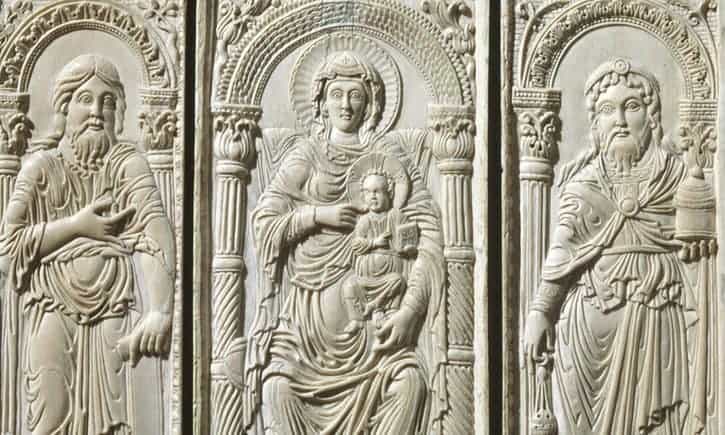 The cover of the Lorsch Gospels is one of the most unexpected beauties in any of our museums. This yellowish-white carving comes from the depths of the dark ages, when Europe was supposedly a primitive and barbaric place – yet it is a delicate and subtle artistic masterpiece.

It was made in Aachen, Germany, in about 810 to protect a splendid illuminated manuscript produced at the court of the Emperor Charlemagne.

Its harmonious design, symmetrical arches, putti and robed figures cleverly emulate the lost splendour of ancient Rome – a splendour Charlemagne longed to restore. In the lowest panel, the infant Christ lies in a manger watched over by an ox and ass in one of the earliest nativity scenes in art.

This tender portrayal has a loving humanity that communicates directly with us across the  centuries. And it could become illegal in Britain. Under new rules being seriously considered by the government, if a work of this age and quality came on to the market, no British museum or private collector would be allowed to buy it.

How long will it be, if this legislation is introduced, before campaigners take the next logical step and call for treasures such as the Lorsch Gospels cover to be taken off display, or even destroyed, like the obscenities they supposedly are?

For this early medieval wonder was carved from elephant ivory. Under new rules, it is illegal in Britain to trade in ivory objects made since 1947, a totally proper and necessary measure against the modern ivory trade and its incitement of ivory poaching. Yet campaigners including the World Wildlife Fund, Tusk and the Duke of Cambridge insist that doesn’t go far enough. Illegal ivory traders can forge pre-1947 antiques, they claim, in calling for a total ban on all trade in ivory objects. Unbelievably, the government is taking seriously the idea of banning trade in all ivory antiques, however old.

There is no rational argument for criminalising some of the greatest art in history just because it does not satisfy 21st-century moral qualms. The Lorsch Gospels cover comes from a time wildly different from our own, with totally alien ideas and beliefs. Elephants were legendary beasts to Europeans in the ninth century, their ivory a wonder. It also happened to make a good artistic material: easy to carve, yet enduring. It is absurd to look at the Lorsch Gospels and see nothing but brutality towards elephants, yet this historically ignorant, narrow-minded view may be enshrined in British law.

The argument that modern ivory objects can easily be disguised as older ones does not hold water. An organic material, ivory can also be carbon dated – a test announced in 2013 even measures the age of ivory accurately within the 20th century using traces of nuclear radiation. Carbon dating helped convict an illegal ivory trader in Britain last year.

Even without carbon dating, it is easy to disinguish medieval masterpieces from crude modern imitations. The notion that criminal ivory traders can easily knock up a masterpiece like, say, the ivory salt cellar from 16th-century Benin whose pungent portraits of Portuguese soldiers can be seen in the British Museum, is obviously nonsense. The real drive to ban all ivory objects is to express a dislike of anything that embodies cruelty to animals.

Prince William made this explicit when he reportedly said he would like all ivory in the royal collection “destroyed”. That’s a passionate response to the horror of the ivory trade, not a rational way to fight it. How can 21st-century poachers be defeated by destroying 19th-century ivory artworks given as gifts to Queen Victoria? This does not stop modern crimes. Instead it criminalises the art of the past.

Ivory art made before modern times is not just beautiful and skilled – it is a document of global encounters before modern times. An “oliphant” in the British Museum is a hunting horn covered with African scenes that reveals a cultural dialogue between the Arab world, sub-Saharan Africa and the kingdom of Portugal in the 16th century. It also happens to be carved out of an elephant’s tusk. To see the tusk and ignore the history is to narrow our minds.

Paul Heermann’s early-18th-century ivory sculpture of Christ on the cross meanwhile, in the V&A, was made almost a thousand years after the Lorsch Gospels but still comes from a world that had no understanding of the vulnerability of the species. If we stop ourselves looking at such premodern ivory we will be philistines and bigots, congratulating ourselves on a victory over art. The next step is cultural destruction. We should leave this deadly line of thinking to Islamic State.

This article was first published by The Guardian on 16 Feb 2017.

We invite you to share your opinion whether the resale of antique ivory should be banned? Please vote and leave your comments at the bottom of this page.