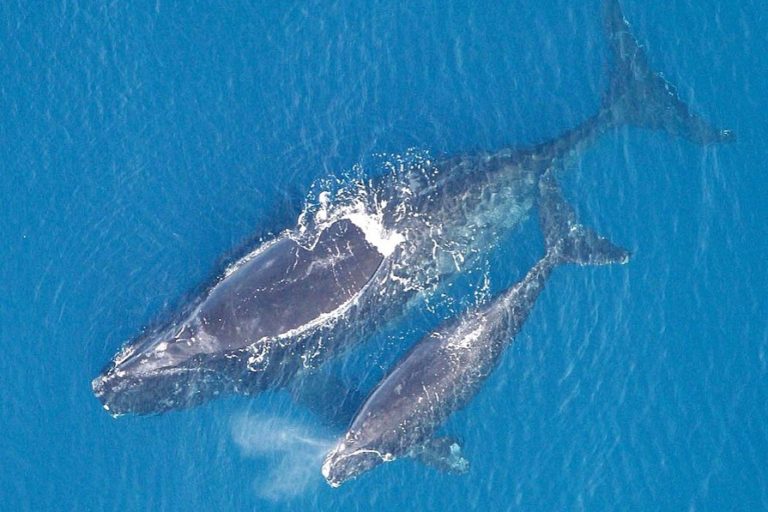 There’s more grim news for the North Atlantic right whale, one of the most endangered whale species in the world. In June this year, six individuals were spotted dead in Canadian waters.

Among them was a breeding female named Punctuation who had given birth to eight known calves and had been a grandmother to at least two grand-calves during her lifetime.

With only some 400 North Atlantic right whales (Eubalaena glacialis) estimated to survive today, researchers and conservation groups are worried.

“The loss of sexually mature females is biologically a major loss to this species that has seen a precipitous population decline over the past several years,” the New England Aquarium said in a statement, according to the New York Times.

Wolverine, a 9-year-old male named for three propeller cuts on his tail, was the first North Atlantic right whale to be discovered dead, on June 4. Punctuation, named after small scars on her head that resembled dashes and commas and thought to be around 40 years old, was found next, followed by Comet, a 34-year-old grandfather, and an 11-year-old female. Last week, two more dead whales — an unnamed female and another female named Clipper — were spotted dead.

Canadian officials and researchers have so far conducted necropsies on three of the dead whales. While the necropsy on Wolverine remained “inconclusive,” according to Agence France-Presse, preliminary findings from Comet’s necropsy are “highly compatible with death due to blunt trauma, consistent with vessel strike,” according to Fisheries and Oceans Canada. Punctuation’s necropsy, too, suggested that she died after being hit by a ship. A necropsy on Clipper was scheduled for July 1, the government department announced in a tweet on Sunday.

Apart from collisions with ships, North Atlantic right whales also die from entanglements in fishing gear. In another tweet on Sunday, Fisheries and Oceans Canada said the Canadian Coast Guard had spotted a right whale entangled in the Gulf of the St. Lawrence. “Due to weather and human safety being paramount, a response will not be mounted today. If weather permits, we will attempt to locate it tomorrow and assess rescue options,” it said.

A recent study published June 20 that analyzed details of 43 North Atlantic right whales with known causes of deaths since 2003 from Florida, U.S., to the Gulf of St. Lawrence, Canada, found that 38 were due to ship strikes and entanglements. Another study published in November last year found 80 percent of all North Atlantic right whale deaths (70 of 87 deaths) between 1970 and 2009 with known causes of death were due to human activity, primarily entanglement in fishing gear and collisions with ships.

North Atlantic right whales were once hunted to near extinction by whalers, but recovered slowly after hunting was banned in 1937. Since 2010, however, their population has been declining again. At least 17 individuals died in 2017 — 12 in Canadian waters — while only five new calves were spotted. In 2018, there were three documented deaths among the North Atlantic right whale population in U.S. waters, and no calves. This year, seven right whale babies have been seen so far, while six deaths were documented.

“With less than 420 individuals remaining, any loss is tragic for this species teetering on the brink of extinction,” Kitty Block, president and CEO of the Humane Society of the United States, said in a statement. “The federal government needs to take whatever steps are necessary to prevent their entanglement in fishing gear and to limit the risk of deaths by ship strike. We cannot simply stand by as these remarkable animals disappear from Planet Earth.”

Canadian officials have responded to the latest deaths by passing some measures. Marc Garneau, Canada’s minister of transport, for example, said that effective immediately, they were “implementing an interim precautionary speed restriction of 10 knots, for vessels of 20 metres or more in length travelling in the western the Gulf of St. Lawrence, in the two designated shipping lanes north and south of Anticosti Island.”

He added, “Failure to comply will result in an Administrative Monetary Penalty of up to $25,000.”

To protect the whales from getting entangled in fishing gear, Jonathan Wilkinson, the minister of fisheries, oceans and the coast guard, said that among other measures, the closure of snow crab, lobster and other fisheries areas would be adjusted to “include the area where 90% of the North Atlantic Right Whale were sighted last year during the prime fishing season.”

“Last year, no North Atlantic right whale died in Canadian waters,” Wilkinson said in the statement. “This success was due in part to the Government of Canada’s swift action, strong partnerships and industry compliance. With an additional year of science and consultations, the advanced measures announced today will strengthen protection for the endangered North Atlantic right whale, while also sustaining and growing the ocean economy that so many Canadians rely on.”

This article by Shreya Dasgupta was first published on Mongabay.com on 1 July 2019.

Take direct action to protect whales and dolphins by donating as little as $1 to our “Fighting for Wildlife” crowdfunding initiative.

Focusing on Wildlife supports well-known wildlife conservation organizations, which spend at least 80 percent of the money they raise on actual fieldwork, rather than administration and fundraising. When making a donation you can designate for which type of initiative it should be used – wildlife, oceans, forests or climate.