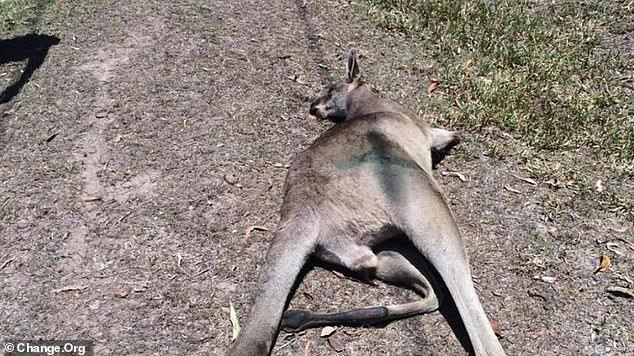 Dozens of mangled kangaroo carcasses have turned up rotting in a field after being shot, decapitated and disemboweled, sparking fears a psychopath is to blame.

Residents in Dunkeld, 260km west of Melbourne claim they found around 40 dead marsupials across two night-time killing sprees on November 21 and December 3.

While the government has allowed the animals to be killed by shooters with permits since October, the wounds violated regulations, leaving residents alarmed.

One resident, who wished to remain unnamed, said the kangaroos had not been killed properly.

‘When I first came across the shocking scene of kangaroo parts strewn across the landscape, my first thought was that there was a psychopath on the loose, and we ought to be very careful,’ she said.

‘The instinct to warn people of the danger kicked in. My second thought was to start looking for Ears For Days and Fringe Lily, two male kangaroos that have been visiting my garden for many years.’

The kangaroos discovered at Grampians National Park (pictured), in Dunkeld Victoria, were found with wounds breaching the pet-food scheme’s code of ethics

Some joeys survived the onslaught but later died without their mothers.

Two months ago, the Victorian government passed legislation allowing kangaroos to be killed for pet food.

It commenced after a four-year pet food trial began in 2014, aimed at reducing the Australian icons’ numbers.

Farming groups rallied for the project claiming the roo population needed to be controlled as they cause damage to fences, eat fodder and crops, and are dangerous for drivers.

The resident slammed the sanction as a cruel money-making scheme and said it had made the area unsafe -as rifle-wielding hunters edge closer to homes.

Australian Society for Kangaroos spokeswoman Nikki Sutterby estimated that shooters earn about $10 in exchange for meat and $10 for the skin.

According to Animals Australia, 40,000 to 60,000 kangaroos were killed annually, which has trebled since Victoria introduced the Authority to Control Wildlife System (ATCWS).

Aside from the state permit system, Kangaroos are also harvested commercially across six Australian states.

In 2016, 1.34 million kangaroos were killed for the commercial industry.

This article was first published by The Mail Online on 14 December 2019.