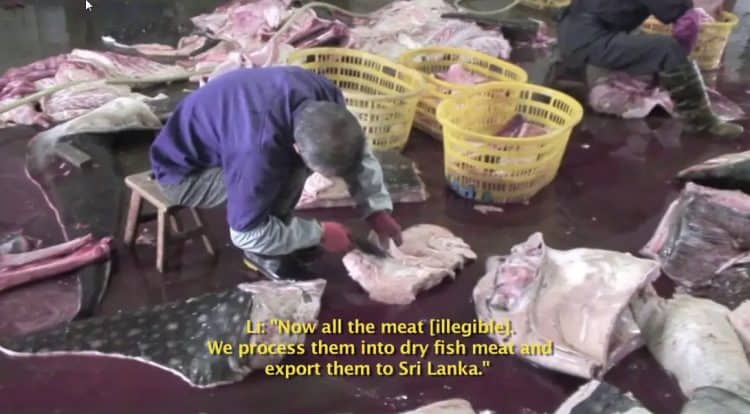 Whale sharks are being slaughtered: That’s the shocking news from a report issued by WildLifeRisk, a nongovernmental organization. A three-year investigation provides evidence that a factory in southeastern China is cutting up about 600 of the 21-ton (19-tonne) fish a year.

It’s illegal—whale sharks are a protected species under Chinese and international law. But it’s easy to understand why: A single carcass is worth about $30,000. The shark meat is sold for food, the fins are sold to restaurants for shark fin soup, the skin is sold to manufacturers for bags, and the oil is sold to companies that make fish oil supplements.

The factory is also reportedly killing and processing other species under international protection, including basking sharks and great white sharks.

In a taped conversation between factory general manager Li Guang and a translator, Li states the facility processes between 500 and 600 big sharks each year, including whale and basking sharks.

A nongovernmental organization in China tipped off Hofford and Hilton to this factory. “But to protect them, we can’t reveal their name,” writes Hofford in an email to National Geographic.

Not a Little Thing

“If they’re in fact processing 600 a year, that’s pretty horrifying,” says Robert Hueter, director of the Center for Shark Research at the Mote Marine Laboratory in Sarasota, Florida. The worldwide population is estimated to be in the thousands. (Read about whale sharks in National Geographic magazine.)

The report states that local fishers supply these sharks to the factory, but that the animals also come in from as far away as Indonesia, the Philippines, and Mexico.

Hueter can recall only one other similar instance of whale sharks being slaughtered: a legal fishery in Taiwan that took about 800 whale sharks between 1995 and 2008. That fishery folded six years ago due to international pressure.

All three species—whale, basking, and great white sharks—are protected under CITES Appendix II, meaning that although they are not currently threatened with extinction, “they may become so unless trade is closely controlled,” according to the CITES website.

Countries that have signed the treaty—which include China—must demonstrate that the export of species listed on Appendix II is done sustainably and legally, explains Sonja Fordham, president of Shark Advocates International in Washington, D.C.

The report states that China has its own national protections in place for these three shark species, and that a special permit is needed to hunt them.

A statement by the Bureau of Fisheries—which is under China’s Ministry of Agriculture—in the South China Morning Post noted that “the hunting and sale of the three shark species was illegal on the mainland and punishable by a fine or jail sentence.”

Hofford says that he and Hilton are now working with the director of The Cove—the documentary detailing the roundup of dolphins in Taiji, Japan—to bring wider attention and awareness to the issue of shark fisheries.

Hueter himself is reaching out to colleagues in Asia to get more details on this factory.

“What bothers me about this report is that this is an undercover operation going on in China,” Hueter says. “So if there’s one of these [factories], the chances that there’s more than one are pretty good, I’m guessing.”

This article was written by Jane J. Lee for National Geographic.

ANOTHER EXAMPLE OF CHINA'S DISRESPECT FOR ANYTHING THAT LIVES! WHEN ARE THEY GOING TO BE STOPPED FROM KILLING ALL OUR WILDLIFE, ON LAND OR IN THE OCEAN. IT CONTINUES, AND IT NEEDS TO BE STOPPED BY ENFORCING TOUGHER RULES AND REGULATIONS, AND LAWS, AND THE INFRA STRUCTURE TO INSURE THAT THIS IS STOPPED. WHAT GIVES THESE PEOPLE THE RIGHT TO KILL! THESE ANIMALS, AND MAMMALS BELONG TO ALL OF US. I HAVE OVER THE YEARS LOST ALL RESPECT FOR CHINA. PEOPLE IN CHINA NEED TO SPEAK UP! THE YOUNGER GENERATION NEED TO REACT TO THIS IN CHINA .

What will China and other countries do when all the animals they crave are gone??