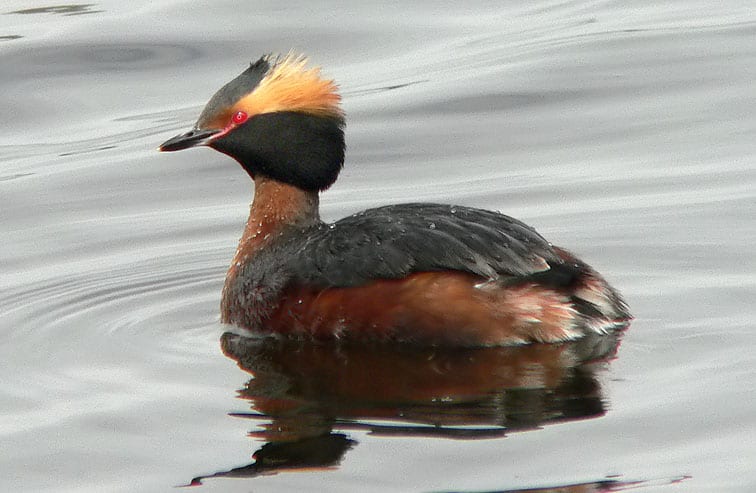 Stopping the introduction of pike into Scottish lochs could help ensure the future of one of Scotland’s rarest birds, according to research by RSPB Scotland.

It found that the moderately sized lochs with an abundance of small fish (sticklebacks and minnows) to feed on, clear water to hunt fish and plenty of nesting habitat were most suitable for the species.

It also revealed that lochs containing pike had fewer small fish, which are a valuable food source for grebes.

The Slavonian grebe only began breeding in the UK in 1908; its population today remains restricted to northern Scotland where latest counts have shown only 29 breeding pairs remain.

Conservationists hope a better understanding of species, particularly during the breeding season, could help determine what measures are needed to reverse the population decline.

Ron Summers, RSPB Scotland’s Principal Conservation Scientist said “The Slavonian grebe is still a relative newcomer to the UK and as such we have much to learn about its behaviour and factors affecting its population size. This research helps us understand what kind of conditions are suitable for grebes when raising young. In this way, we can help ensure suitable habitat is maintained and that the species isn’t competing against others, such as pike, for food. By considering these measures we stand a better chance of improving breeding success in the future.”

Tim Dawson, SNH South Highlands area officer, added :”We’d all like to make sure these striking birds not only remain in the Highlands, but also increasetheir smallnumbers. Thisstudy is an important first step, giving us information onhowto helpprotect these vulnerable birds.”

This article was written by the Royal Society for the Protection of Birds (RSPB) is a registered charity: England and Wales no. 207076, Scotland no. SC037654

This article is somewhat disappointing because despite being headed ‘Slavonian Grebe Chicks Taken By Pike’, there is then nothing in the text elaborating this title. I believe the non-native (to Scotland) but widely introduced and long term naturalised Pike to be seriously limiting breeding success for a whole range of waterbirds, including on various RSPB Reserves. This I suspect is a far worse problem than Mink, which get all the attention. Is there a plan to remove Pike from the lochs supporting Slavonian Grebes? Removal by electro-fishing could be simpler than ‘stopping the introduction of Pike’. However, keen Pike anglers… Read more »