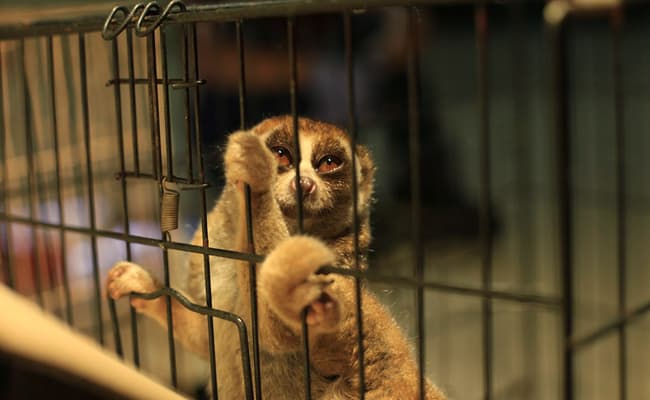 Animal advocates are celebrating a landmark ruling against wildlife traffickers who were arrested last fall in Indonesia after they were caught in connection with a criminal network trading endangered slow lorises.

The operation, which was part of an effort to dismantle an illegal wildlife trafficking network that was using Facebook to sell wildlife, was carried out by a rapid response team from the Environment and Forestry Protection and Law Enforcement Agency, along with a team from International Animal Rescue (IAR).

In all, two individuals were arrested and a group of nine endangered Sumatran slow lorises were saved from the pet trade.

Although one tragically died as a result of the ordeal, the remaining survivors were examined and treated by IAR’s team, and were taken to the Kalaweit’s Supayang Gibbon Conservation center to recover.

They were extremely distressed when they were seized, but at the time rescuers suspected they had only been recently captured and hoped they would be good candidates for release because their teeth had not yet been cut out.

They were right, and the group was later returned to the wild in the Bung Hatta Forest Park in West Sumatra last October.

Now, their rescuers are applauding officials for handing down an unusually harsh sentence for the individuals involved. The two will now serve three and a half years in jail, and they will each pay a fine of $7,260, or they’ll spend an extra six months in jail.

“History has been made in terms of law enforcement against slow loris traders in Indonesia,” said Tantyo Bangun, Chairperson of IAR Indonesia. “Previously, the perpetrators were only sentenced to 3-12 months in prison, even though some of them were suppliers and collectors arrested with evidence of dozens of slow lorises.”

All species of slow lorises are supposed to be protected by local laws and by the Convention on International Trade in Endangered Species (CITES), but the demand for these adorable little creatures as pets is posing a growing problem, and it’s being perpetuated by people sharing photos and videos of them on social media, which has continued to drive the illegal trade that’s threatening their survival in the wild.

IAR has taken in over 800 slow lorises since 2008, and now estimates that an average of three of them are poached from the wild every single day, while one of those will die before they’re even sold.

Not only is the illegal trade in slow lorises putting them at an increasing risk of extinction, it’s causing immeasurable suffering for these shy, nocturnal primates who suffer a number of heartbreaking abuses when they become victims of the trade.

Karmele L Sanchez, Program Director of IAR Indonesia, added in a statement that the outcome of this case shows the importance of severe penalties for wildlife crimes, adding that it’s hoped that this case will serve as an example for others involving crimes against protected wildlife in other areas.

Hopefully it will also raise awareness about the plight of slow lorises and need to crack down on the illegal pet trade that continues to put them at risk.