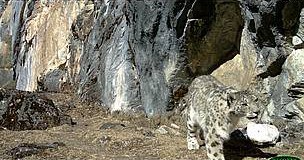 This is the first pictorial evidence that snow leopards are thriving in Wangchuck Centennial Park, a vital snow leopard corridor between Jigme Dorji National Park in the West and Bumdeling Wildlife Sanctuary in the East. Field biologists from the Government of Bhutan and World Wildlife Fund (WWF) captured over 10,000 images during the camera trap survey in Wangchuck Centennial Park.

“The findings are phenomenal as these are the first snow leopard images recorded in Wangchuck Centennial Park,” said WWF’s Dr. Rinjan Shrestha, who led the survey team. “It suggests that the network of protected areas and corridors is helping to link local snow leopard populations, which will be invaluable to ensure long-term persistence of snow leopards in the region.”

Snow leopards are elusive and endangered, with around 4,500-7,500 in the wild. Bhutan is the only country on Earth where the habitat of snow leopards and tigers intersect. It’s unknown how many exist there, but it’s critical to find out as threats are mounting – from retaliatory killing from herders, loss of habitat to farmers and poaching for their pelts. And then there’s climate change.

Warming at high elevations in the Himalayas is causing treelines to ascend and isolating snow leopard populations. Under a high emission scenario, as much as 30 percent of their range could be lost. Their ability to move upslope is limited by oxygen availability.

The overall goal of the survey is to determine how many snow leopards there are in Wangchuck and where they exist, in order to prioritize the best areas for conservation.

“The snow leopard images from the park show the incredible richness of wildlife thriving in Wangchuck Centennial Park and prove why the park must be supported by donor agencies for conservation,” said Dr. Pema Gyamtsho, Minister of Agriculture and Forests, Royal Government of Bhutan. “For snow leopard conservation in Bhutan, Wangchuck Centennial Park acts as the critical linkage between Bumdeling Wildlife Sanctuary and Jigme Dorji National Park, thereby ensuring the functionality of the northern Bhutan conservation complex.”

The Government of Bhutan and WWF have partnered to co-manage Wangchuck Centennial Park since it was designated as Bhutan’s tenth national park in 2008. With 244 vascular plant species, 23 mammal species and 134 bird species, the park is rich in biodiversity. It’s dedication resulted in Bhutan having more than half its land under protection. The Government of Bhutan and WWF work together on species conservation, climate change studies, monitoring, patrolling and community conservation projects.

“WWF has a special commitment to Wangchuck Centennial Park, especially because we were invited to co-manage it with the government in 2005,” said Shubash Lohani of WWF’s Eastern Himalayas program. “It was the first time Bhutan entrusted an entity other than government to manage a protected area.”