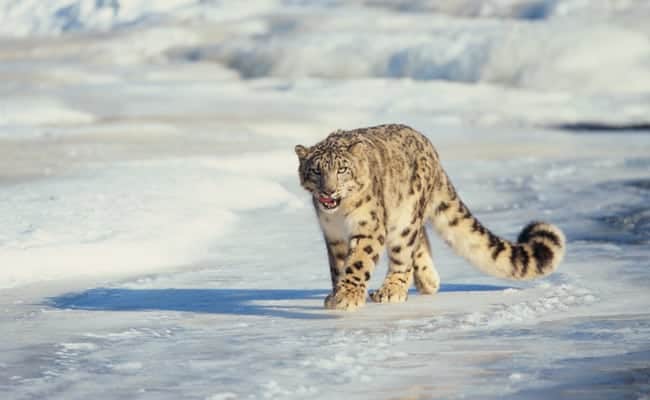 Snow leopards received some good news with a status change from Endangered to Vulnerable by the International Union for the Conservation of Nature (IUCN), but advocates for these elusive cats are warning that it’s not quite time to celebrate yet.

Snow leopards have been classified as Endangered on the IUCN Red List of Threatened Species since they were first listed in 1972. The last time they were assessed was in 2008, when there were believed to be fewer than 2,500 individuals left who were experiencing a high rate of decline–two criteria that must be met for an Endangered listing.

Following the latest assessment, experts estimate there are now at least 4,000 in the wild. The IUCN and members of the assessment team attributed the change in status to significant conservation measures that have been undertaken, including anti-poaching efforts, initiatives to reduce conflicts with livestock and retaliatory killings, programs that raise awareness about their plight, and an increase in protected areas in their range.

“To be considered ‘Endangered’ there must be fewer than 2,500 mature snow leopards and they must be experiencing a high rate of decline. Both are now considered extremely unlikely, which is the good news, but it does not mean that snow leopards are ‘safe’ or that now is the time to celebrate. The species still faces ‘a high risk of extinction in the wild’ and is likely still declining–just not at the rate previously thought,” said Dr. Tom McCarthy, Executive Director of Panthera’s Snow Leopard Program and a member of the assessment team.

Unfortunately, as the IUCN and others are warning, snow leopards are still at risk of extinction and are still facing numerous threats throughout their range, which covers more than 1.8 million square kilometers across Asia. Even with conservation efforts, they still face being poached for their beautiful fur and other parts, retaliatory killings, habitat loss and degradation, mining, a loss of their main prey species and new challenges being brought by climate change.

Advocates are worried the change in status will lead to confusion about how snow leopards are doing, and that it will potentially weaken conservation efforts.

“It is important that a change in status is not misinterpreted–this change does not mean that the snow leopard has been ‘saved’ and efforts on its behalf can stop. The IUCN’s Vulnerable status means a species is still vulnerable to extinction, and the snow leopard population is still believed to be in decline and facing a high risk of extinction. Threats–poaching, habitat loss, loss of prey species– still exist and new threats such as roads, border fences, and climate change are increasing. So conservation actions must continue to be increased to conserve the species,” said Peter Zahler, Coordinator of the Wildlife Conservation Society’s Snow Leopard Program, who was also on the assessment team.

Still other organizations believe the change was a mistake entirely. The Snow Leopard Trust released a statement in opposition to the downlisting, arguing that the best available science doesn’t justify the change, and that reclassifying them as Vulnerable could have serious consequences.

The organization stated, “We are most concerned about how the lower status may weaken conservation efforts in range countries and the ability of local governments to stop these threats. Governments may have less support from some sectors of their society to create protected areas for snow leopards given the potential revised status. We have earlier successfully opposed plans to commercially hunt snow leopards for trophy, and we anticipate that these pressures will increase.”

The Snow Leopard Trust will be formally challenging the decision by petitioning the IUCN, and will be working in the meantime to build a better estimate of the snow leopard population. Hopefully the change won’t bring devastating consequences for snow leopards, and people will continue to support conservation efforts to ensure the survival of these iconic cats.