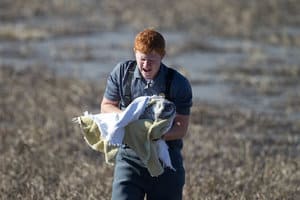 “No hunter has done this,” Brian Hanzlick, lead investigator and game warden for the Kansas Department of Wildlife, Parks and Tourism, said Tuesday. “This was someone who literally violated the law. They knew exactly what they were shooting at when they pulled the trigger.”

Dan Witt, a Hoisington physician and wildlife photographer, spotted the wounded bird Thursday afternoon about a half-mile from the Kansas Wetlands Education Center. He goes to the Bottoms about five times a week.

“I could put my binoculars on it and I could see it turn its head but its eyes were shut,” Witt said. “It looked like it was lying as opposed to being perched.”

Witt called the Kansas Wetlands Education Center’s Eric Giesing, who picked up the bird, wrapped it in towels and took it to the Great Bend Raptor Center at the Brit Spaugh Zoo.

“It had an obvious injury to its right wing,” Witt said. “There was blood on the wing. It was damaged significantly. It looked like an animal had chewed on it.”

But it was alive. And an X-ray showed lead fragments. Veterinarian Mike Malone worked desperately to save it. The bird’s wing had to be amputated.

It died the next day.

Hanzlick said authorities already have leads on identifying the poacher.

Although snowy owls are not an endangered species, shooting the owl is a federal violation of the Migratory Bird Treaty Act of 1918. If convicted, the person faces a fine of up to $15,000 and/or up to six months in jail. In addition, Hanzlick said, the poacher can face revocation of any hunting, fishing or trapping licenses.

This year is being called one of the most unprecedented snowy owl invasions of all time.

The only season currently open is snow goose. And in recent weeks, the Bottoms have been filled with white geese.

Is it possible someone mistook the birds?

“They look nothing like snow geese,” said Kenny Kessler, special agent for the U.S. Fish and Wildlife Service, with an office based in Topeka.

“Sometimes people will think they are shooting at a snow goose and end up shooting a pelican, because they are also white and have black wing tips. They have also shot at egrets, which is another large white bird but doesn’t have any black feathers.”

The snowy owls are different, Kessler said, in large part because they show no fear to humans.

The snowy owls that made it to Kansas this winter are starving and in weakened conditions. A few have been taken in by wildlife rehabilitators.

It was only a matter of time before one of the owls would turn up having been shot, said Mark Robbins, collection manager of ornithology at the University of Kansas Biodiversity Institute. “It’s not surprising but it is disturbing.”

This past week, he picked up a dozen snowy owls that had died in Nebraska.

“There is already a very high mortality rate on these birds,” Robbins said.

It will be a struggle for most of them to return to the Arctic tundra come spring.

“Most of these birds aren’t going to make it back.”

This article was written by Beccy Tanner of the Wichita Eagle