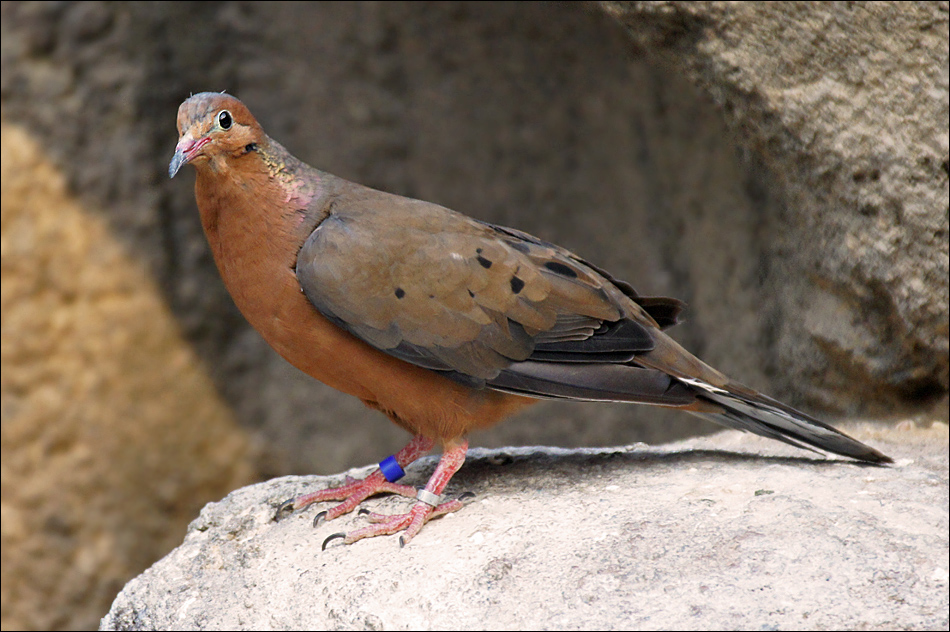 For the first time in four decades, the critically endangered Socorro Dove has returned to its native country of Mexico, thanks to a captive breeding program involving 33 organizations in 12 countries. The Socorro Dove was endemic to Socorro Island on the Revillagigedo Archipelago, approximately 400 miles southwest of the west Mexican city of Puerto Vallarta. The last record of the species in its natural habitat dates from 1972. Introduced mammals likely drove it to extinction through predation and habitat destruction.

Mexico’s role in the conservation breeding program was ramped up earlier this year when six Socorro Doves were moved from facilities at New Mexico’s Albuquerque BioPark to Africam Safari, located near Mexico City. Today, facilities in Europe, the United States, and now Mexico breed Socorro Doves in their aviaries as part of the globally managed breeding program. Altogether, there are approximately 70 doves in Europe, 37 in the U.S., and six in Mexico.

In recognition of the effort, an official ceremony was held in September at Africam Safari zoo in the city of Valsequillo, Puebla, Mexico. The ceremony was attended by the coordinating team of the Socorro Dove Project, members of the conservation community, and representatives of Mexico’s ministries of the interior (SEGOB), the environment (SEMARNAT), and the Mexican Navy (SEMAR). During the ceremony, a commemorative plaque was offered to the Mexican Navy and all institutions participating in the international conservation breeding program whose efforts made possible the repatriation of this endemic dove.

Dr. Luis Baptista, founder of the Island Endemics Foundation, initiated the Socorro Dove Project in 1987-1988 after corroborating that a viable population existed in human care. The ultimate goal of the project is to return Socorro Doves to Socorro Island. After Baptista’s death in 2000, Juan Martínez-Gómez joined the foundation and crafted a collaborative program with the Mexican Navy. By 2004, a breeding station funded by the Island Endemics Foundation and the Mexican Navy had been built on Socorro Island. However, in 2005, concerns about the potential for spreading avian influenza from Europe prevented the return of the doves to Mexico. In order to move closer to the goal of returning the birds to their home country, Socorro Doves bred by zoos participating in the European Association of Zoos and Aquaria’s European Endangered Species Program were sent to the Albuquerque BioPark in 2008.

In April 2013, after careful planning with Frank Carlos Camacho, Director of Africam Safari, the conservation breeding program was successfully extended to Mexico. Plans for the reintroduction of Socorro Doves to Socorro Island are underway with the collaboration of SEGOB, SEMAR, and SEMARNAT, along with César Tejeda at Endémicos Insulares, Helen Horblit at the Island Endemics Foundation, Juan Martínez-Gómez at Mexico’s Instituto de Ecología (INECOL), and Patricia Escalante at the National Autonomous University of Mexico (UNAM) Institute of Biology.

“Moving birds to Mexico is an extremely significant step in the Socorro Dove Project,” said Peter Shannon, Curator of Birds at Albuquerque BioPark. “But there is still much work to be done. The generations that follow us will be the ones to finally see Socorro Doves back on the island—flying again in their ancestral home.”

The Albuquerque BioPark played a key role in the international effort to conserve this rare bird. BioPark staff successfully raised 32 chicks since acquiring their first 12 Socorro Doves in 2008. While working with the birds, Shannon and his team have learned and contributed a great deal of knowledge about management of the species. Six partner institutions in North America currently house Socorro Doves and work together to maintain a healthy population. Already two institutions have bred the dove, and two of the birds bred at Smithsonian’s National Zoo were part of the transfer to Mexico.

American Bird Conservancy has been a partner in the effort through the support for disease studies and habitat restoration work on Socorro Island.

“This island is the most important single site for endangered bird conservation in North America with two critically endangered birds: the Townsend’s Shearwater and Socorro Mockingbird; one endangered bird, the Socorro Parakeet; and the ‘extinct in the wild’ Socorro Dove,” said ABC Vice President Mike Parr.

“ABC is committed to helping with the full restoration of the island and its birds through collaboration with a broad partnership of groups including especially Grupo de Ecología y Conservación de Islas. Socorro Island is also the most important Alliance for Zero Extinction site in Mexico from a bird conservation perspective,” added Parr.ABC’s work on Socorro Island is supported by the National Fish and Wildlife Foundation and the DJ&T Foundation.