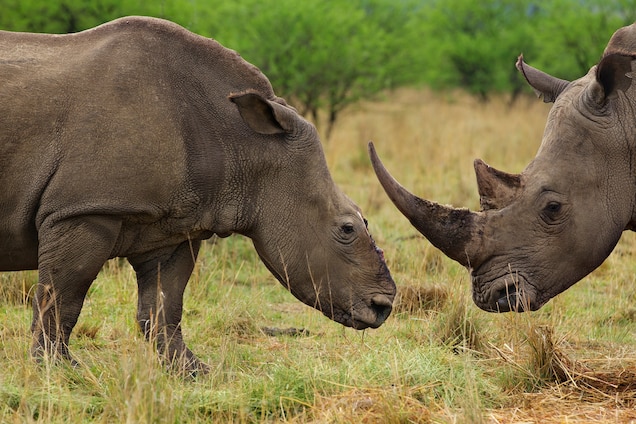 South Africa will not propose ending the ban on the international rhino horn trade at the next major meeting of the Convention on International Trade in Endangered Species of Wild Fauna and Flora (CITES), the body that regulates the worldwide wildlife trade.

Jeff Radebe, the minister of planning, monitoring and evaluation, said the government has accepted a recommendation from the Committee of Inquiry, which was appointed to study and advise on the issue, to keep things as they are.

“The committee recommends that the current mode of keeping the country’s stock levels be kept as opposed to the trading in rhino horns,” a statement on last week’s cabinet meeting says.

Buying and selling rhino horn across borders has been prohibited since 1977. The illegal trade remains rampant, however. Wealthy Vietnamese customers began snapping up rhino horn in the early 2000s when a rumor started that it had cured a politician’s cancer. But even before that, traditional Chinese medicine drove demand. Some erroneously believe it can lower fevers and cure liver ailments. Vietnamese men also use it as a status symbol to show off wealth—a little pinch of rhino horn powder in a cocktail, for instance—or as an aphrodisiac.

In reality, rhino horn is just keratin—the same stuff as your fingernails. It has no medicinal value whatsoever.

Yemen also used to be a major destination for smuggled rhino horn, which was used to make the handles for the most expensive jambiyas, which are curved, double-edged daggers worn around the waist.

Rhino poaching has skyrocketed in the last decade. Africa-wide, a record 1,338 rhinos were killed in 2015, the sixth year in a row poaching has increased, according to the International Union for Conservation of Nature’s rhino specialist group. That’s up from just over a dozen poached in 2007.

South Africa’s minister of the environment, Edna Molewa appointed the Committee of Inquiry to study the issue and advise her on whether or not to propose lifting the ban at the next CITES conference, which will be held in Johannesburg this September.

Michael ‘t Sas-Rolfes, an independent conservation economist who served on the committee, argues that the ban has failed to control poaching. A tightly controlled legal trade would help stop poaching, he believes.

“You’re not just doing it to knock the price down,” said Sas-Rolfes, though one possible benefit of legalizing the trade is lowering the value of rhino horn. “You’re also doing it to empower the people selling it so they will reinvest in rhino conservation.”

But those in the anti-trade camp, including conservationist Ronald Orenstein, argue that trade wouldn’t help conservation at all. If the trade is legalized, the stigma of rhino horn goes away and more people would want it. Demand would go up—but where would that additional supply come from?

“It’s much more difficult and complicated,” Orenstein said. He points to what happened when CITES tried an experimental sale of ivory to China and Japan after the ivory trade had been banned.

“The last time they tried something like this, poaching went through the ceiling,” Orenstein said. “I understand where the idea is coming from, and I understand there’s a genuine problem. But I’m afraid [trade would not be] a solution.”

This article was first published by National Geographic on 21 Apr 2016. Lead Image: Rhino owners often remove horns to protect their animals from poachers and to store them for sale if the trade ban is lifted. Photograph by Brent Stirton, Getty/National Geographic.