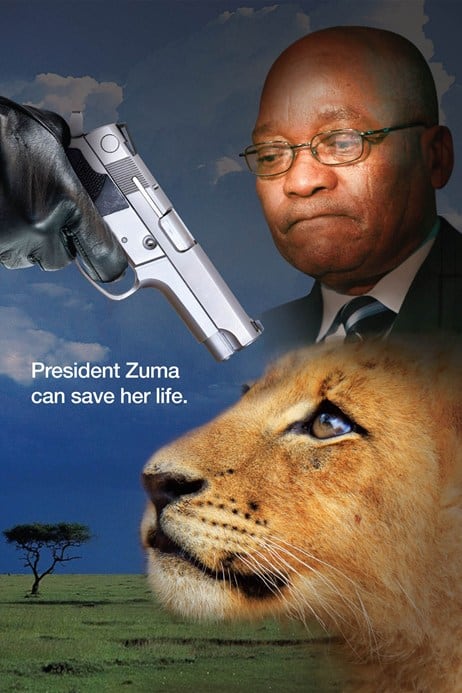 Avaaz today welcomed the news that South Africa’s High Court has ruled that Airports Company South Africa (ACSA) acted unconstitutionally when they censored Avaaz’s advertising campaign at OR Tambo International Airport which called on President Zuma to stop the trade in lion bones.

Emma Ruby-Sachs, Campaign Director at Avaaz said: “The judge today has ripped off the gag on 700,000 people, and protected the right to free speech across South Africa.

This decision is a victory for citizens everywhere who now can begin, again, calling on President Zuma to end the brutal lion bone trade, before lions are wiped out for good.”

The adverts were removed as ACSA was concerned that the inclusion of the President in the ads could cause a “public relations nightmare” and ordered them to be blanked over “a.s.a.p.” after just nine days. The adverts were displayed across the International Arrivals Hall and depict a lioness looking down the barrel of a gun, with a picture of President Zuma in the background with the caption saying; “Our lions are being slaughtered to make bogus sex potions for Asia. Will President Zuma save them? Urge him to stop the deadly lion bone trade now.”

At Avaaz’s request, Primedia Limited (Primedia) had pre-approved the advertisements which were due to run for one month.

But following a request from a journalist to photograph the ads, ACSA denied the journalist access and ordered the ads to be taken down immediately with no reason provided to Avaaz or time for Avaaz to respond. One Primedia staff member told Avaaz the company had come under immense pressure to blank out the advertising.

More than 700,000 people around the world have signed Avaaz’s petition to President Zuma to stop the trade in lion bones at www.avaaz.org/lions and more than 300,000 saw the Google Ads which targeted potential tourists to South Africa in at least six key markets.

South Africa is the largest exporter of lion bones and the latest government figures show a 250% increase in these exports between 2009 and 2010. Yet in May, the Government decided against taking action on this issue. In part as a result of this trade, reports estimate that the lion population in Africa has dropped from roughly 200,000 in the late 1970s to approximately 20,000 today with only 2,200 of those remaining in South Africa.

We invite you to add your signature to the 737,604 other signatures already on the petition:

1 Million to Ban the Lion Trade

Avaaz has 240,000 members in South Africa and over 27 million members from all over the world.