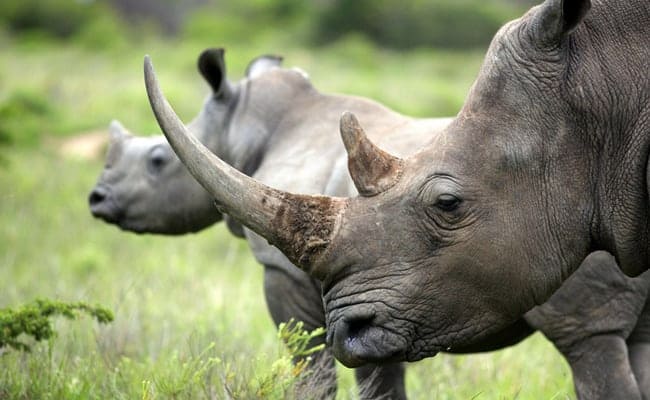 South Africa, home to the largest population of rhinos left on earth, could step up as a conservation leader in protecting these unique creatures. Instead, the country is hosting the first-ever online auction of rhino horns, which will take place this week.

Thousands of rhinos have been ruthlessly killed by poachers to meet the demand for their horns. Sadly, the onslaught has continued to jeopardize the future of these animals. According to the government,1,054 rhinos were killed by poachers last year alone.

Although arguments have been made for legalizing the trade–supposedly to take the pressure off of wild rhinos — most conservationists continue to argue against it.

Earlier this spring, rhino advocates won a major victory when South Africa decided against submitting a proposal to legalize the international trade in rhino horns at the 17th Conference of the Parties (CoP17) to the Convention on International Trade in Endangered Species (CITES).

Unfortunately, that win was short-lived.

South Africa’s Court of Appeal soon handed down a ruling that effectively legalized the trade within South Africa. It was the result of a challenge brought by rhino ranchers to a 2009 ban on the trade — and one of those ranchers is about to cash in.

This week, an auction house will sell horns that belong to South Africa’s biggest rhino rancher, John Hume. Hume, who owns more than 1,500 rhinos, has stockpiled more than six tons of their horns. He contends that money raised from auctioning off 264 horns is to “raise money to further fund the breeding and protection of rhinos.”

Critics, however, remain skeptical of his motives and continue to stand in opposition to any legalized trade. Opponents have also raised some serious concerns about the fact that the auction site has pages in Vietnamese and Chinese, in addition to English, as these nations are major drivers of the illegal trade.

“Clearly Mr Hume has a broader market in mind, and this calls into question his motive – in my mind, to sell horn, non-lethally harvested over the years from his more than 1,500 rhinos, and for no other reason than to realise a vast profit of potentially millions of dollars. Despite his protestations that some of the funds will be used to protect his rhinos, the truth is there is no conservation value in what he is doing. This is a matter of profit, not protection of one of the world’s most endangered species,” said Dr. Joseph Okori, head of the South Africa regional office for the International Fund for Animal Welfare.

Although the government contends that there will be a permitting system to help track horns, wildlife advocates fear that this auction will only further complicate the issue. They allege that it has the potential to cause confusion among consumers, undermine efforts to reduce the demand for rhino horn and fuel the black market.

Hopefully outcry over this auction will help raise more awareness about the issue and intensify efforts to close all markets for rhino horn. Otherwise, we risk driving some of the world’s most iconic species to the point of no return.