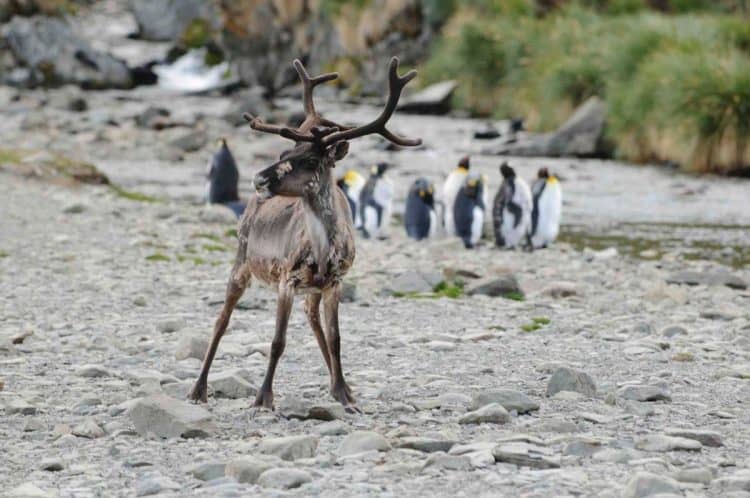 Hunters have slaughtered 3,500 reindeer on a British island near Antarctica in a step to get rid of animals that were brought from Norway a century ago and are an increasing threat to native wildlife.

The reindeer on South Georgia were corralled into pens and slaughtered by a 16-strong team, mostly Sami reindeer herders from Norway, officials said on Monday.

Marksmen shot animals in remote areas with rifles. Up to 1,500 reindeer remain for a final cull in 2014.

“It will be an amazing change for the island” to have no reindeer, Martin Collins, chief executive of the government of South Georgia and the South Sandwich Islands, told Reuters by telephone.

The reindeer, naturally at home in the Arctic at the other end of the globe, were brought to South Georgia from Norway by whalers in the early 20th century to be used as a source of food on the remote South Atlantic island.

The reindeer flourished from a few dozen and have increasingly trampled the nests of birds on the ground such as king penguins and the south Georgia pipit. They also cause soil erosion and eat local plants such as tussac grass.

“Several decades of over-grazing means that the reindeer are a severe threat to birds that are only found on this island,” Reidar Andersen, head of the Norwegian Nature Inspectorate which oversaw the hunters, said in a statement.

South Georgia is also running a long-term project to kill off rats and mice, which have spread across the island after arriving as stowaways on ships.

The unwanted animals are part of a worldwide problem of invasive species – animals or plants that take over new habitats, like European rabbits in Australia or South American water hyacinth plants in some African lakes.

Such species can spread disease and undermine food production. One estimate a decade ago of the global damage caused by invasive species was $1.4 trillion a year.

There were more reindeer than expected on South Georgia – a count last year indicated about 3,000 reindeer in total, this year the estimate was 4,500 to 5,000.

The meat from the culled reindeer, who were killed in recent weeks, has been taken by freezer ship to the Falkland Islands where it will be sold to locals and passing cruise ships to offset the 500,000 pound ($756,600) cost of the 2013 cull.

Collins said that lessons learnt from the cull might help France, which wants to eradicate reindeer introduced a century ago to the Kerguelen Islands in the southern Indian Ocean.

This article was written by Alister Doyle and published by the Huffington Post.

The meat your selling was tainted because of the previous rat extermination.