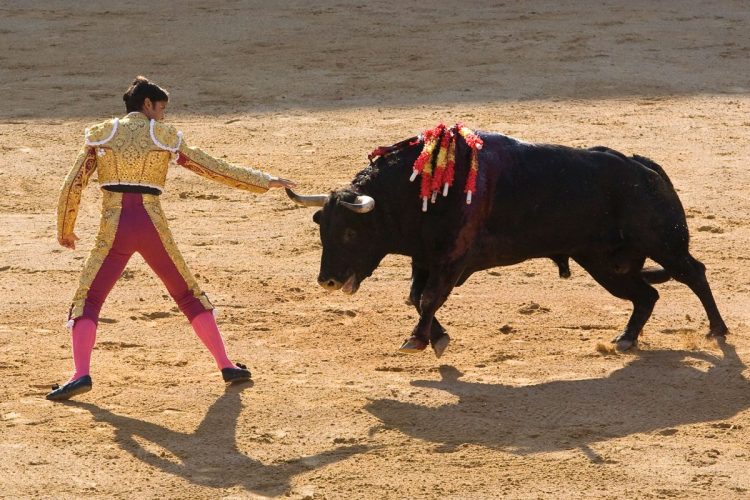 Shockingly Televisión Española (TVE) is reported to be resuming broadcasts of live bullfights after Spain’s new Government has taken control of its broadcasting board.

Spain’s public broadcaster pulled the barbaric blood sport from regular schedules in 2006 whilst under the previous Socialist government, to prevent children from being subjected to such cruelty and violence.

However following its take over by the conservative People’s party’s Prime Minister, Mariano Rajoy, the broadcaster plans to start showing the horrific practice again in a bid to help promote the increasingly unpopular pastime.

It has also been reported that the section detailing the prevention of children watching live bullfights has been removed from the broadcaster’s code of conduct.

This is of great concern. With bullfighting set to be aired before the watershed, impressionable children will be able to witness the violent animal cruelty taking place through their TV screens. Studies conducted by leading child psychologists have shown clear links between children that have watched bullfighting and increased levels of aggression and anxiety.

Other worrying effects include becoming desensitised to animal suffering and violence generally.

The decision taken by the Spanish broadcaster to once again, air the live torture and killing of animals for entertainment really just goes to show the desperation of the pro-bullfighting lobby to revive this dying practice.

The move made by TVE unfortunately follows current proposals which could see bullfighting being formally categorised as an asset of Spanish cultural interest if passed.

The League and fellow anti-bullfighting coalition members including HSI, PETA, WSPA, CAS International are all working hard to prevent this from happening, and on Wednesday 4th September will be handing in our collective Love Spain Hate Bullfighting? Petition to the Spanish Ambassador in London to contest the current proposals.

Bullfighting is outrageously cruel and has no place in a modern society.

This article was written by Emma for the League Against Cruel Sports.

I hear Spain is a beautiful country. But as long as there is bull fighting in Spain (or anywhere else), I will never spend a single tourism dollar there. I will not patronize any Spanish business manufacturing products there. I will not buy any Spanish products imported into the U.S. I disagree that the Spanish people are a population with "a very vile, abusive outlook on wildlife" because I have Spanish friends who are devout animal rights activists. The high road here is education and encouragement- to open the eyes of people who have always seen such travesties through the… Read more »

So I guess signing the petition a few weeks ago did not help.. very sad… even sadder to know that we are stepping backwards and not forward.. shame on the Spanish politicians!

The Spanish people have very vile abusive outlook on wildlife and this is a awful horrible so call sport and should be banned through the EU which Spain is a member of.

I agree with you!