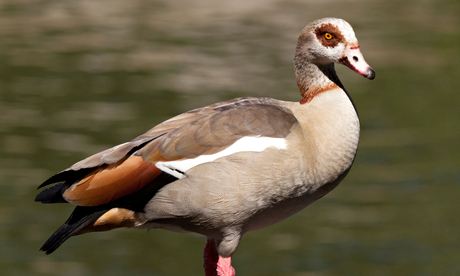 After struggling to survive Britain’s cold winters for more than 300 years the Egyptian goose, Alopochen aegyptiacus, is undergoing a population explosion. Once confined to a small area of Norfolk the goose is now abundant across Greater London and surrounding counties and has been reported breeding in the West Country and as far north as the Humber.

A native of sub-tropical Africa the Egyptian goose was brought to Britain in the late 17th century as an ornamental bird for the lakes of country gentlemen. Its attraction is its apricot breast, white wing patch and the dark brown patches over its eyes that make it look as if it is wearing dark glasses.

Not surprisingly, being used to warmer weather, the goose found survival difficult not least because it was accustomed to breeding in January – a habit it has found hard to break – making the survival of its chicks unlikely. Another handicap is that it prefers to nest in large holes in trees, something not always easy to find near a suitable lake.

Forty years ago its numbers began to creep up and its breeding area expanded away from the Norfolk Broads to all of Norfolk. Fifteen years ago the population began rising far more rapidly and there are now thought to be 900 breeding pairs in Norfolk alone. London and Berkshire, along the Thames and in gravel pits, are now also strongholds and there is a new colony growing in the East Midlands.

This bird still nests in the winter before other geese and ducks have started breeding and has up to ten young. While this appearance of chicks so early makes them particularly vulnerable to hungry predators, the warmer weather of the last 20 years is thought to have improved their survival rate and to be the reason for the sudden jump in numbers.

Climate change therefore means a permanent and probably large population of another non-native goose. Canada geese show that an explosion in population can be a problem in parks and on farms but is the Egyptian goose going to be another?

The birds are regarded as pests in their native environment in Africa and some are shot because they munch crops, but being grass eaters they are not good to eat. So far there are no reports that the species is a nuisance here.

There is a fear that they might out compete or cross breed with native species but again there is no evidence yet that they are doing so. The fact they nest in holes in trees and also rabbit burrows makes them a potential rival to the Shelduck but so far that does not seem to be issue either. This is possibly because the goose needs fresh water and likes lakes, and the Shelduck prefers coastal nesting sites and estuaries.

In the jargon of the bird world the goose has become a self-sustaining species, in other words no longer needs to rely on escapees from private collections to keep them going in the wild. The Netherlands already has a much larger population than Britain, around 100,000 individuals, even though the first breeding pair was not recorded until the 1960s, and they were thought to be immigrants from Norfolk. Now some are re-crossing the North Sea. This goose is obviously here to stay.

This article was written by Paul Brown for The Guardian.