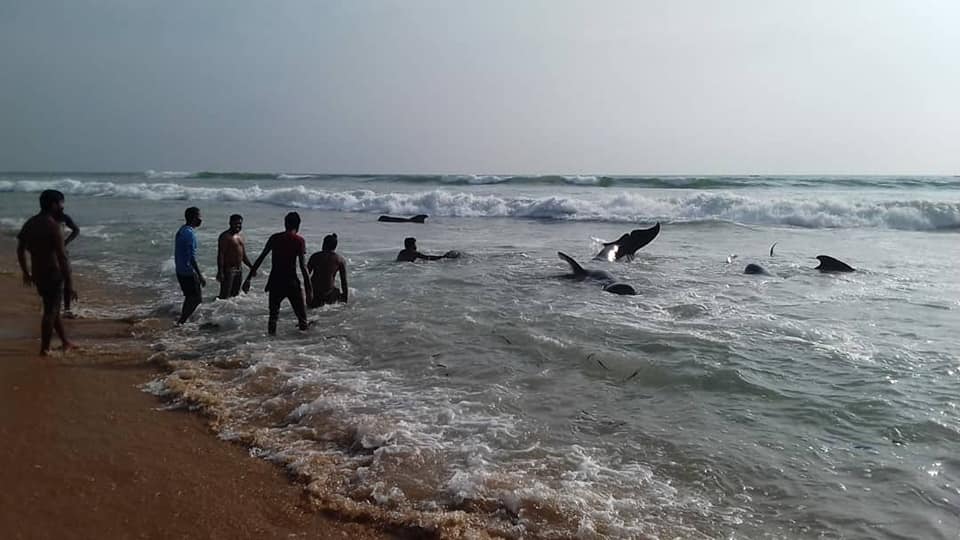 PANADURA, Sri Lanka — Volunteers in Sri Lanka defied the ongoing COVID-19 second wave to join a mammoth overnight rescue effort to push more than 100 stranded pilot whales back into the sea. At least five whales were reported to have died despite the efforts.

The whales beached in the southwestern town of Panadura, about 30 kilometers (20 miles) from Colombo, on Nov. 2. Local fishers first noticed the unusual scene at around 1:30 p.m.

“They first appeared as a dark patch in the horizon and kept on moving toward the shore like a giant wave,” said fisherman Upul Ranjith. “We tried to push them back to the sea, but they kept returning to the beach as if they wished to commit suicide.”

The villagers alerted police, and soon 28 personnel from the area coast guard station had joined the rescue operation, along with dozens of volunteers.

But because of lockdown measures in force in the area, volunteers, scientists and environmentalists had to first obtain curfew passes to join the mammoth rescue mission.

When de Vos reached Panadura that evening, the rescuers had managed to push back some of the stranded whales into the sea, but dozens remained in the shallow water and kept on returning to the beach.

“Rescuing these animals is not just about rolling them out to sea again. It’s a little more complicated than that as it is important to refloat the animals as soon as possible and guide them back to deeper waters to prevent them getting pushed back to the shore,” de Vos told Mongabay.

Rescuers tried guiding the whales into deeper waters, but the animals were weakening and the strong waves would push them back. Then the process would start all over again.

“It is similar to having the whales stuck in a treadmill for hours,” de Vos said.

The rescuers faced a second hurdle as the sun was setting fast and there were no lights on the beach. But among the volunteers were a community of off-road enthusiasts, who had with them six jeeps equipped with floodlights, which they brought down to the beach to light up rescue operation.

Still, the exhausted whales kept returning to the beach, and after several hours of work the rescuers realized they needed a new approach to get the animals back out to sea. Once again, the off-road community, known as I-CERT, stepped up, bringing in Jet Skis to tow the whales out beyond the wave breaks.

Nayanaka Ranwella, an environmentalist who worked with the rescue teams until the mission was completed some 16 hours later, said it was a dangerous exercise to deal with the whales because of their size. Towing them could have easily caused injury to both the rescuers and the animals, he said.

“Some rescuers had been in the water throughout the arduous rescue mission. They were exhausted, but nobody wanted to quit until the mission was complete,” Ranwella said.

De Vos called the rescue operation a “heroic effort,” given the darkness, the sheer number and size of the whales, and the ongoing pandemic.

“The moon was behind clouds so we had no real natural light to work with,” Ranwella said. “These people cared less about their own safety and prioritized the safety of these animals, during a very difficult time in our planet’s history.”

In all, at least 100 whales were successfully pushed back out to sea. However, four whales died, likely due to exhaustion, in Panadura, while a fifth washed up dead on a beach about 6 km (3.5 mi) further south.

De Vos said more fatalities were likely, considering the animals’ exhaustion, but praised all those involved in the rescue mission for their generous support.

Whale strandings are common, and pilot whales are the group most susceptible to the phenomenon.

In 2017, about 20 short-finned pilot whales were stranded on the eastern coast of Sri Lanka before being rescued by the Navy and local volunteers. In September this year, Australia witnessed its largest pilot whale stranding event in its history, with an estimated 470 individuals beaching in Tasmania.

Sri Lanka experienced its worst whale stranding incident nearly a century ago, in 1929, according to marine biologist Ranil Nanayakkara from the organization Biodiversity Education And Research (BEAR).

There are many possible reasons for whale stranding events. The animals’ highly social behavior makes them stay close together, and that includes when one or more of them stray too close to the shore and end up beaching, possible “due to navigational problems, which others also tend to follow,” Nanayakkara told Mongabay.

Pilot whales, like other cetaceans, navigate using sonar, which can be disrupted by outside sources of noise, including manmade ones. An annual joint quadrilateral naval exercise involving the United States, Japan, Australia and India commenced on Nov.3 off the Visakapatnam coast of India. Ranwella said preparations for the maritime drill could create a lot of disturbances underwater and likely result in pilot whale pods getting disoriented.

But both Nanayakkara and de Vos say it’s difficult to pinpoint a single reason for the Panadura stranding.

This article by Malaka Rodrigo was first published on MOngabay.com on 5 November 2020. Lead Image: Rescuers undertaking a 16-hour rescue mission to push a pod of stranded pilot whales back into the sea in Panadura, Sri Lanka. Image courtesy of The Pearl Protectors.