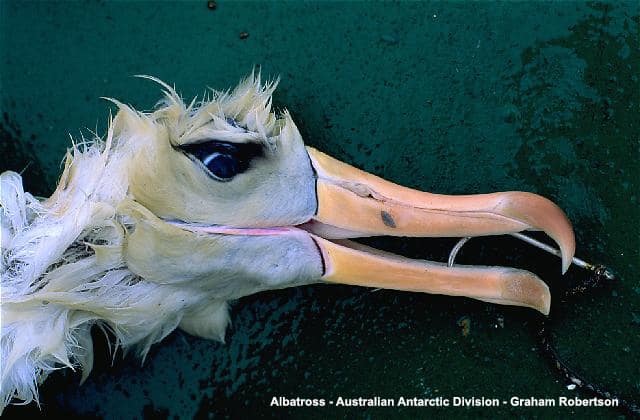 Help stamp out threats to albatrosses during the season of goodwill, that’s the festive plea from the RSPB, which is asking people to help raise funds to protect the threatened birds by saving up the stamps from their Christmas post.

On the planet for 50 million years, albatrosses are the largest flying birds in the world, but it’s estimated that around 80,000 of them are killed each year by longline and trawl fishing vessels. Seventeen of the 22 species of albatross are threatened with extinction.

Cleo Small from the RSPB’s marine team, said: “Christmas and New Year in the UK is the height of summer in the Southern Ocean, meaning albatross parents will be battling against the elements to raise and feed their single chicks, travelling thousands of kilometres for food. Unfortunately, many albatrosses will die trying to grab an easy meal from the baited hooks meant for fish, such as tuna.”

Thankfully, solutions exist. In 2005 the RSPB, in conjunction with BirdLife International, created the Albatross Task Force (ATF) – a team of people who work with fishermen and advise them of the simplest and most effective ways to avoid accidentally catching and killing these iconic birds. Techniques such as using weighted lines to make baited hooks sink more quickly and the use of bird-scaring (tori) lines to deter the birds from the stern of fishing vessels are simple, yet effective measures.

The charity’s stamp appeal, which has made over £100,000 since it began in 2004, encourages people to save stamps from their Christmas post and donate them to the RSPB to raise money for its Save the Albatross campaign.

Money raised so far has helped buy essential equipment for the Albatross Task Force; allowed the team to expand its work into countries such as Ecuador and Peru; and created new opportunities to research, develop and test innovative new mitigation technology.

The charity is hoping to raise money from this year’s stamps appeal to help towards the ATF’s work in Uruguay in 2012.

Susan Sutton, Community Marketing Officer added: “With postal services expected to handle hundreds of millions of cards from now until Christmas, just a tiny proportion of these stamps could make a huge difference to many albatrosses next year. This simple action could be one of the best Christmas presents anyone can give.”

People with stamps can send them to: RSPB Stamps, PO Box 6198, Leighton Buzzard, Bedfordshire LU7 9XT, or you could drop them off at one of our many reserve sites and combine it with a winter walk. Please sort the UK from Foreign stamps as we get higher prices.

Those wanting to donate more valuable items, such as first-day covers or stamp albums can send them to: Stamp Volunteer, Community Marketing, RSPB, The Lodge, Sandy, Beds SG19 2DL.

To find out more about the work of the RSPB and BirdLife International’s Save the Albatross Campaign log onto: www.savethealbatross.net

This post was written by The Royal Society for the Protection of Birds, the BirdLife Partner in The United Kingdom.