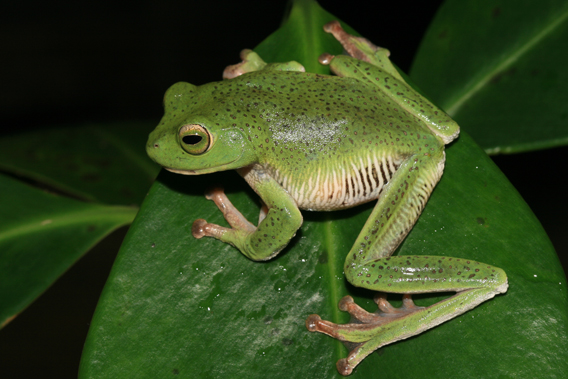 In 1853 Edward Frederick Kelaart, a physician and naturalist, collected a strange frog on the island of Sri Lanka then a British colony known as Ceylon. The specimen was a large shrub frog (about 2 inches or 5.5 centimeters long) with black-outlined white specks on lime-green skin. He dubbed it “starry” after its pale specks, but that was last anyone heard of it. Even the holotype—the body of the amphibian collected by Kelaart—went missing. Fast forward nearly 160 years—two world wars, Sri Lanka’s independence, and a man on the moon—when a recent expedition into Sri Lanka’s Peak Wilderness rediscovered a beguiling frog with pinkish specks.

“These quite stunning frogs were observed perched on leaves in the canopy. They were slow moving, we collected samples which we thought were new species. But after reviewing past work, [especially] extinct species, it was evident that this was Pseudophilautus stellatus,” L.J. Mendis Wickramasinghe told mongabay. Kelaart’s starry shrub frog, or Pseudophilautus stellatus, had been re-discovered!

Wickramasinghe, the lead author of the paper announcing the discovery in Zootaxa, says one reason why the starry shrub frog remained undetected for so long was its habitat.

“We worked in [parts of the Peak Wilderness Sanctuary] where previous studies had never taken place, in tough and rugged conditions, so hardly any researchers had actually gone to these sites,” he explains.

In all the scientists identified 78 individuals during their surveys, but given its scarcity and likely small habitat, Wickramasinghe believes the species should be listed as Critically Endangered. The species is currently imperiled by expanding tea plantations, illegal gem mining, pollution from religious pilgrims, and forest dieback

“Amongst the most important threats noted in this region, is the forest dieback phenomena, possibly due to pollution and/or climate change, which has never been documented in this region before,” the researchers write in the paper. “With decrease in the canopy cover, alien invasive species, such as Clusia rosea, and Pteribium revolutum, are widely distributed in lower areas and is slowly spreading to higher elevations, which can potentially become a threat in the future.”

Key to its long-term survival will be conserving the very places it was found. Despite its many threats, the rediscovery is good news in that it brings one of Sri Lanka’s long-lost amphibians back. The island nation is thought to have the lost more amphibians to extinction than anywhere else in the world, around 20.

“To know that this species is not gone forever and that we do have a second chance of preserving it is indeed beyond belief!” says Wickramasinghe.