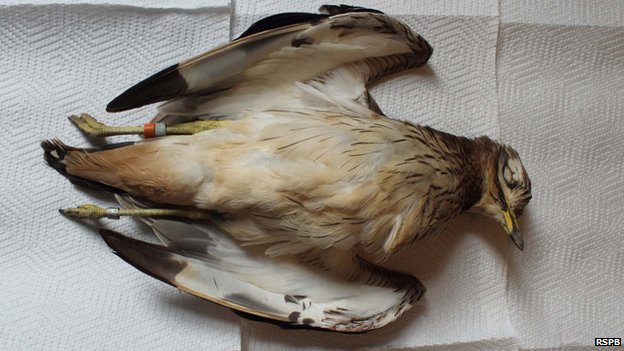 One of the UK’s rarest birds is being put at further risk by the cold spring, the RSPB has said. The bodies of eight underweight stone curlews have been discovered in fields in Norfolk, Suffolk and Wiltshire over the past few days.

The birds are thought to have come from Africa and Spain but struggled to find enough food to survive. Conservation director Martin Harper said it was a “stark reminder of how fragile this species is”.

The birds weighed about 300g (10oz) compared to what is considered a healthy weight of 450g (15oz). The RSPB said there were about 400 pairs of stone curlews in the UK.

Other birds have been affected by the cold weather. At the end of March, hundreds of dead birds including puffins were washed ashore after severe conditions in the North Sea.

The RSPB said it had also received reports of short-eared owls and barn owls found dead after cold weather hampered their ability to hunt.

Mr Harper said: “We should be hearing the sound of chiffchaffs calling from the trees, a classic sign that spring is here, but that isn’t the case.

“Some may have stalled on their migration route, while for others the severe lack of insect food available means they are conserving what little energy they have.”

This article was written and published by BBC News England