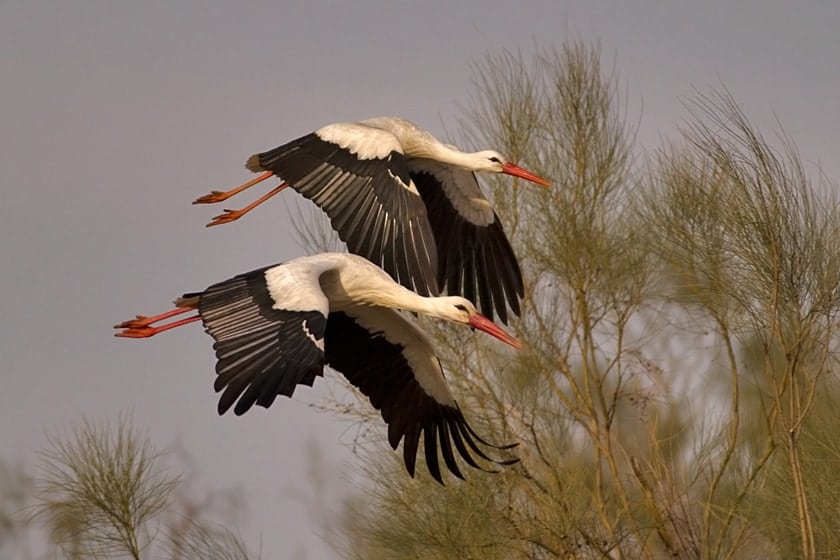 Not all storks migrate to Africa. Many stay for the winter in the Iberian Peninsula, where landfills have become a permanent source of food.

Scientists from Extremadura have analysed the presence of pollutants and pesticides (some prohibited in Spain) in the blood of nestlings from three colonies, two of which are close to landfill sites.

The results reveal that the main source of contamination can be due to the use of insecticides in African countries where the birds migrate, who transfer their contaminated load onto their offspring through their eggs.

Despite suffering population decline in Europe, in Spain the white stork (Ciconia ciconia) is especially populous and concentrated particularly in Castilla-La Mancha (with 11,723 birds) and Extremadura (with 11,190).

However, the province of Cáceres is home to the largest population of storks, with 7,035 couples increasingly migrating less to Africa.

“The storks stay over the winter in the Peninsula, as landfills have become a permanent source of food,” confirm the researchers from the Toxicology Unit of the University of Extremadura to SINC.

As the birds are susceptible to accumulating organic pollutants in their bodies, the team from Extremadura decided to verify the levels of contamination of persistent organic pollutants (POP), and specifically organo-chloride pesticides (OCP) and polychlorinated biphenyl (PCB). They tested 59 nestlings from three colonies in Extremadura with different levels of environmental exposure to urban solid waste treatment centres or controlled landfills: in a protected area for birds (Special Conservation Area ‘Llanos de Cáceres y Sierra de Fuentes’); another surrounded by meadows five kilometres from the landfill; and the last one in a agricultural area two kilometres from another landfill site.

The results, published in the journal Chemosphere, confirmed the absence of PCB in the plasma of the nestlings. According to the scientists, these currently banned substances were detected in two previous studies in stork nestlings in Madrid, in a more industrial and more populated area.

“PCBs have been heavily used in industry, especially as dielectric fluids in capacitators and transformers, as well as flame retardants, solvent-based inks and plasticisers,” Irene de la Casa-Resino, lead author of the study, tells SINC. The study confirms that these environmental pollutants are not longer used in this area of Cáceres.

However, the analysis detected the presence of chlorinated insecticides such as heptachlor, endosulfan, aldrin, and greater concentrations of DDE (dichlorodiphenyldichloroethylene, a metabolite of the well-known insecticide DDT) which, despite its ban, persists in the environment and accumulates in the food chain.

“The most striking fact is that the nestlings from the ‘Campo Arañuelo’ colony, the agricultural area closest to the landfill site, had the lowest level of these pesticides of the three colonies,” stated the researchers, who had assumed that this colony would be the most contaminated due to its proximity to the waste centre and it being in an agricultural area where the use of chlorinated pesticides has been intensive until they were banned. “But that was not the case,” they add. According to the study, the colony that showed greater presence and higher levels of chlorinated insecticides was located five kilometres from the landfill site and surrounded by meadows.

Faced with the absence of a pattern linking the landfill with the pollutants in the birds, the scientists point out that “the greatest concentrations of contamination in the nestlings may be due (at least in part) to the migration of their mothers to the African continent during the winter”.

In these developing countries, many of the pesticides that are prohibited in Spain are being customarily used in high levels. In certain cases, the insecticide DDT is used in agriculture and to control malaria-carrying mosquitoes. “This can be the main source of these pollutants in the storks, who upon their return to the Peninsula transfer part of their pollutant load to their nestlings through the egg yolk, which is high in fat,” observes the scientist.

Although at first the levels detected do not pose a clear risk for the nestlings, “we cannot avoid the existence of chronic problems associated with the presence of these pollutants,” say the researchers, who emphasise that the birds do not suffer acute poisoning except in isolated cases.

Nevertheless, the main problem is found in their long-term effects due to environmental exposures and their accumulation in the fatty tissues of the animals. “Numerous scientific studies have demonstrated that the presence of these compounds in the birds can impact on their reproductive success, making the eggshell thinner and break more easily”, highlights de la Casa-Resino.

In addition, the OCPs can affect other reproductive properties of birds, causing for example, feminisation of males, inhibition and reduction of the number of eggs laid each time, alteration of behaviour in the nest or deformities in the embryos. “These compounds are considered to be endocrine or hormonal disrupters,” says the researcher.

The storks are poisoned through plant-based foods and small animals like rodents, worms and frogs, among others, previously contaminated by these compounds, which can persist in the environment for tens of years. For this reason, the team considers that the stork nestlings, due to their size, easy localisation, control and sampling, “are good indicators of the environmental pollution of an area, and can be used in pollutant bio-monitoring studies.”

This article was first published by Phys.org on 24 Feb 2015.