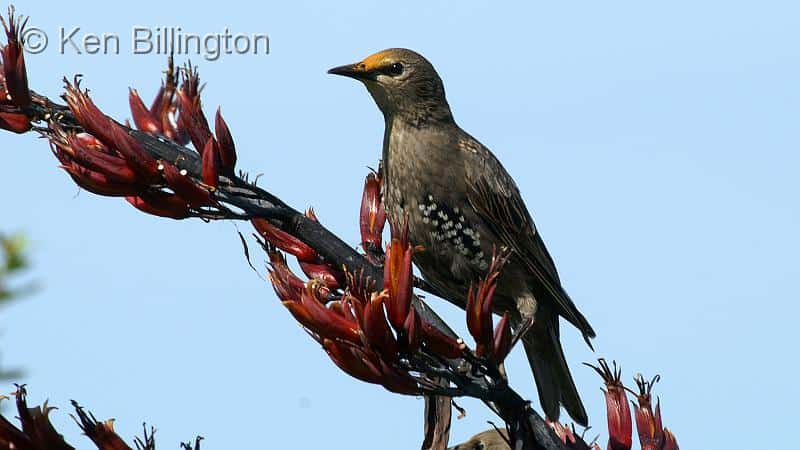 During the summer BirdWatch Ireland HQ received lots of phone calls and emails about strange birds with bright orange heads that have been visiting gardens around Ireland. They tend to flock with Starlings and House Sparrows and can be quite numerous in some areas, though they can’t be found in any field guides.

Rather than being some exotic new visitor, these in fact are Starlings and House Sparrows that have been feeding on a plant called New Zealand Flax (Phormium tenax). Though native to New Zealand, this species has been planted commonly in gardens around the country and has even become naturalised in the wild in many areas. Its high antler-like flower-stalks, which grow out from the centre of a fan of long, narrow leaves, are highly distinctive and will be familiar to many people.

We are used to plants being pollinated by insects and even by the wind, but New Zealand Flax uses another method: it is pollinated by birds. The tubular flowers produce rich, sweet nectar that many birds find irresistible.

As they stick their beaks down into the flowers to feed, a small brush-like appendage dusts the tops of the birds’ heads with brightly coloured pollen, staining it a vivid orange or red colour. When they move on to feed from another flax flower, these birds bring the pollen with them, helping the plant to reproduce.

In New Zealand the main pollinator is a unique native bird called the Tui (Prosthemadera novaeseelandiae), which has even evolved a beak with exactly the same curvature as the flax flower to allow it to feed more easily.

We don’t have any Tui in Ireland, so the plants have to make do with the Irish birds, mainly Starlings and House sparrows, that have learned that flax nectar is a good source of food.

The staining on the bird’s crown feathers is only temporary and doesn’t cause them any discomfort or harm: they are probably completely unaware of how odd they look to our eyes.

It is not at all surprising that people think they have seen a new species of bird, as the addition of such a vivid splash of colour to otherwise rather drab and muted species really catches the eye and stands out as something unusual.

It will be interesting to see whether this feeding behaviour spreads to other bird species and whether it aids the spread of this invasive plant species in Ireland: if you spot any birds with unusual orange or red crown patches, please let BirdWatch Ireland know at [email protected] or 01-2819878.

This post was written by BirdWatch Ireland, the largest independent conservation organisation in Ireland and the designated Irish BirdLife International Partner. Its aim is the conservation of wild birds and their natural habitats. Established in 1968, it currently has over 14,000 members and supporters and a local network of over 20 branches nationwide. It owns or manages an increasing number of reserves which protect threatened habitats and the birds that rely on them, produces several publications dealing with birds and nature conservation in Ireland, and carries out educational and survey work.