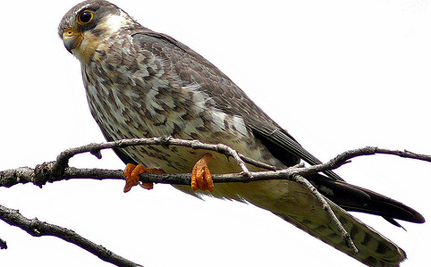 Just about a year ago I wrote about 14,000 migrating Amur Falcons that were being murdered every day in the Indian state of Nagaland, a stopover in their migration from Siberia to Africa.

Now, as a result of action from Care2 and other groups, as well as three Indian villages, no birds have been massacred this year. Almost 9,000 Care2 activists signed our petition to save the Amur Falcons.

Thank you, Care2 activists! Here’s what I wrote about these awesome birds in 2012:

The Amur Falcon is a stunningly beautiful bird with an amazing life: this small raptor has one of the longest migration routes of all birds, doing up to 15,000 miles in a year. These falcons are also unusual in that they travel a huge distance over the sea and continue their journey at night.

Their route takes them from Siberia and northern China, where they breed, to Somalia, Kenya and South Africa, where they stay over winter. En route, these falcons stop in northeast India, where tens of thousands of them are brutally massacred in the remote state of Nagaland.

However, in August this year, just ahead of the hunting season, local conservation group Nagaland Wildlife and Biodiversity Conservation Trust, with the support of several other green groups, including Care2, launched a conservation and patrolling program called Friends of the Amur Falcon.

The church (Nagaland is a mostly Christian state) got involved too, citing the Book of Leviticus in the Bible, which prohibits the consumption of birds of prey.

The government, and the villages of Pangti, Ashaa and Sungro, also stepped in. “It is our duty to protect these wonderful birds while they are passing through Nagaland and treat them as our honoured and esteemed guests, in the true Naga tradition of hospitality,” said Nagaland’s chief minister Neiphiu Rio.

Rio threatened to stop grants to villages involved in hunting the falcons, and village councils decided to make the hunting of the falcons illegal, and to levy a fine of Rs 5000 (about $70) on any hunters.

In addition, according to Wildlife Trust of India, when the Amur Falcons arrived in Nagaland in October this year, as part of their migratory route through the northeastern Indian state, squads of ex-hunters and other youth from the three villages patrolled the roosting areas of the birds day and night to keep them safe.

Remarkably, the squads recorded that not a single Amur Falcon was killed.

That’s right: after recording the murders of over 14,000 birds a day last year, during the 2013 year there have been no killings at all.

“The ecological significance of this bird is huge,” says Ramki Sreenivasan, wildlife photographer and co-founder of Conservation India. The organization runs several education centers in the villages, where teachers, church officials and other village elders are being taught about the falcon and its amazing journey.

A beautiful story, just in time for Thanksgiving!

This article was written by Judy Molland for Care2.com