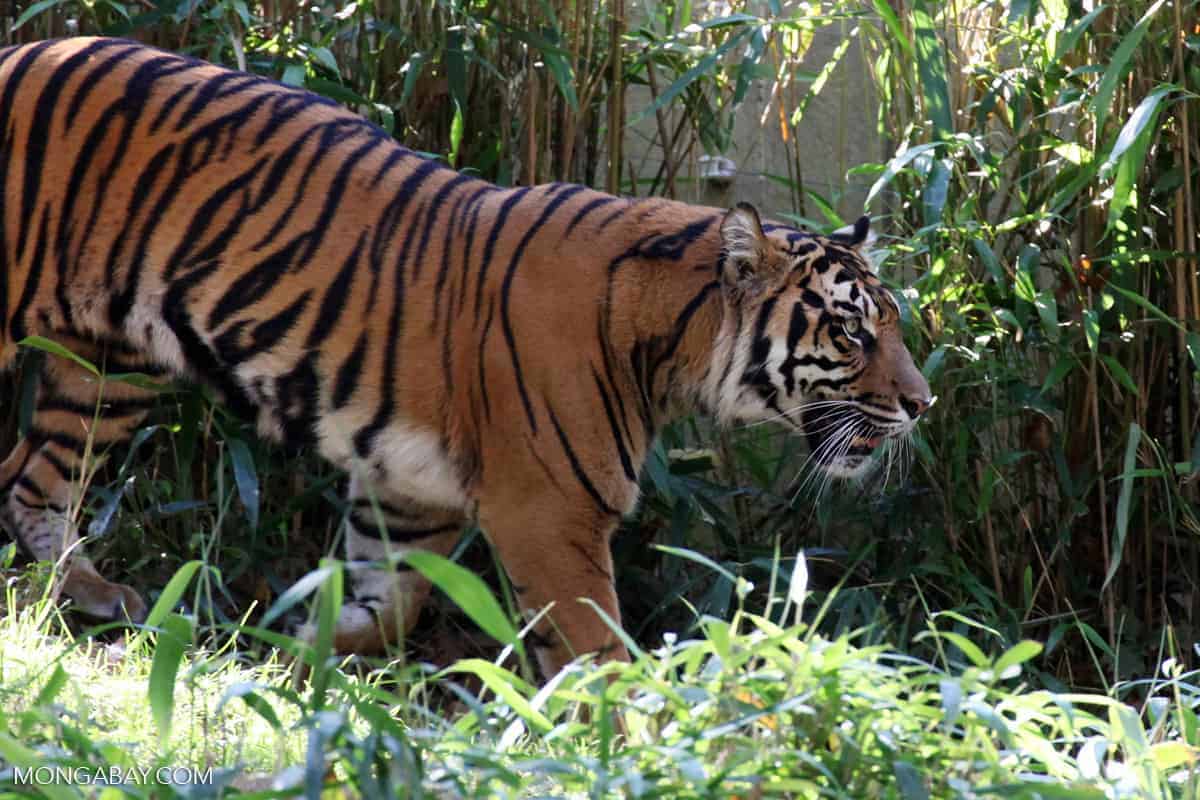 JAKARTA — Authorities in Indonesia have captured a Sumatran tiger blamed for killing two people earlier this year. They have moved the female tiger, nicknamed Bonita, to a wildlife rehabilitation center in West Sumatra province.

The capture of Bonita on April 20 in Riau province marked the end of the “longest rescue and evacuation effort for a Sumatran tiger in history,” according to Wiratno, the director-general of natural resources and ecosystem conservation at the Ministry of Environment and Forestry.

The hunt for the critically endangered Sumatran tiger (Panthera tigris sumatrae) lasted 107 days. It began after the first reported killing, on Jan. 3, when thetiger attacked three workersat an oil palm plantation in Riau’s Indragiri Hilir district. The tiger killed one of the workers, identified as Jumiati, 33, after she fell from a tree that she had climbed up to escape the animal.

The animal remained elusive, and struck again on March 5, when it reportedlykilled a 34-year-old man, Yusri Efendi, who was passing through the same palm estate, run by the Malaysian company PT Tabung Haji Indo Plantations.

The ministry’s team finally managed to take down the tiger after hitting it twice with tranquilizer darts. Its goal was to capture the tiger alive, amid mounting protests from locals rattled by the two deaths, who threatened they would otherwise “kill the beast” themselves.

“Rescuing this Sumatran tiger has grabbed the special attention of the environment minister and the president, so we appreciate the work done by the team,” Wiratno said at a press conference in Pekanbaru, the Riau provincial capital, on April 21.

The tiger was immediately transferred to an animal rehabilitation center operated by the Arsari Djojohadikusumo Foundation in Dharmasraya district in neighboring West Sumatra province. It is expected to undergo a series of medical examinations before it is released back into the wild.

Wiratno said he had ordered the facility to provide him updates on the tiger’s condition.

The capture of Bonita averts a repeat of a near-identical case in neighboring North Sumatra province, where villagers speared a tiger to death and mutilated its body in March. The tiger had reportedly attacked and injured two people who were part of a hunting party out to catch the animal, which they considered a supernatural incarnation.

Conflicts between humans and wildlife flare up regularly across Sumatra, whose once vast swaths of forest have been cleared at alarming rates for commercial development, primarily palm oil and rubber plantations, as well as mines. There are an estimated 500 Sumatran tigers left in the wild, according to WWF. The species is listed by the IUCN as critically endangered, or just a step away from going extinct.

“We call on everyone to protect the habitat [of tigers], and boost patrols on these areas,” Wiratno said.

Banner image:A captive Sumatran tiger. The species still live in the wild in pockets of forest in Sumatra. Photo by Rhett A. Butler/Mongabay.