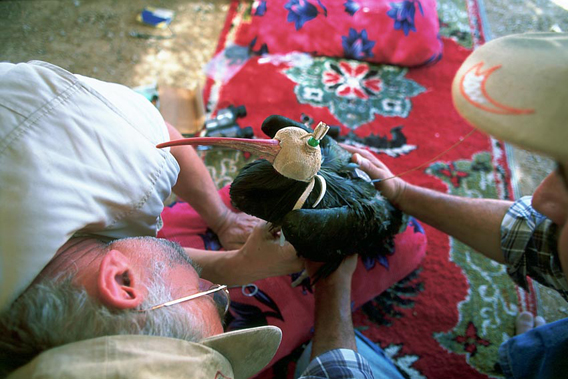 The eastern population of northern bald ibises (Geronticus eremita) has likely fallen to a single breeding bird, reports conservationists monitoring the dwindling flock. The population had believed to be obliterated starting from 1989 until a small group was discovered in 2002 in Syria. However, it now appears that this last group is vanishing one-by-one despite efforts by conservation groups to sustain the distinct population.

Only one northern bald ibis has returned to the breeding site in Palmyra, Syria this season. Dubbed Zenobia, she has possibly become the population’s endling, i.e. the last of her kind. Zenobia was paired with a male, Odeinat, but his satellite tag stopped broadcasting in July of last year. The birds migrate annually from Syria to the Ethiopian highlands.

Northern bald ibises in Syria do not technically represent a distinct species or subspecies according to the International Union for Conservation of Nature (IUCN). However, they are genetically different from their western cousins (found in northern Africa) and are the only members of the species to undertake long-range migrations.

“[This] is most likely the first time ever that the breeding of this species does not occur in the Middle East—over the course of millennia. This unique and legendary migratory population has now a foot (and a half) in its grave,” Gianluca Serra, a conservation biologist who has worked with the populations, told mongabay, adding that, “there might still be some few immature wandering around within Arabian peninsula.”

There is one final hope for the eastern population of this species: a semi-wild population is currently being raised in Turkey and numbers around 100 individuals. However, this group is not free-ranging and doesn’t migrate yet. In addition, if released Serra says they will not know the location if their wintering grounds since this information is believed to have been culturally transmitted from bird-to-bird.

The northern bald ibis is listed as Critically Endangered by the IUCN Red List and numbers only around 500 wild birds in North Africa.

This article was written for Mongabay.com and re-posted on Foocusing on Wildlife.