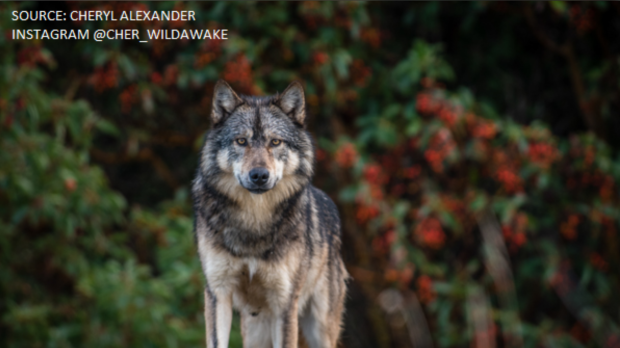 VICTORIA — A lone wolf that recently ventured into Victoria and had to be relocated by conservation officers has been shot dead.

CTV News Vancouver Island has confirmed Takaya, a well known wolf who spent years living alone on Discovery Island, has died this week. Cheryl Alexander is a conservation photographer who has been following one of nature’s great predators for years and said the animal was shot by a hunter.

“I’ve been crying for the last couple of hours,” said Alexander. “It’s heartbreaking.”

She lives in Victoria and has been following, documenting and studying the lone wolf named Takaya, which lived on Discovery Island off the coast of Oak Bay, for six years.

In January, Takaya was seen scurrying down the sidewalks of James Bay and was tranquilized by conservation officers. He was then relocated and released into the wild at an undisclosed location.

Alexander said Takaya was relocated to an area near Port Renfrew.

“I’ve known where he has been for the last month and he’s been doing really great and healthy,” she said.

On Wednesday, she was told by local hunters that a wolf with an ear tag had been shot.

“Takaya is the only wolf on the island with an ear tag,” she said. “I knew right away. I just found out a few hours ago.”

Alexander said she is at a loss for words and wants trophy hunting to be stopped.

“What are we doing allowing trophy hunting?,” she said. “As far as I know it was a legal hunt.”

Takaya was relocated to an area near Port Renfrew and was doing really great and was healthy.

Today she was told that a wolf with an ear tag had been shot.

“Takaya is the only wolf on the island with an ear tag,” she said. “I knew right away. I just found out a few hours ago.” pic.twitter.com/fIbknsWipf

CTV News Vancouver Island reached out to the BC Conservation Officer Service for more information and received the following statement in response:

“The Discovery Island wolf, that was relocated from James Bay earlier this year has been shot and killed by a hunter, the conservation officer service can confirm. We understand many British Columbians and people around the world shared care and concern for the well-being of this wolf and this update will affect many people.”

The conservation officer service went on to say the wolf was killed Tuesday near Shawnigan Lake, “approximately 50 kilometres away from where it was released in late January.”

“Conservation Officers released the wolf in rugged and remote wilderness outside of Port Renfrew, on the west side of Vancouver Island,” the statement continued. “This isolated coastal habitat similar to Discovery Island was carefully chosen to give the wolf the best chance possible. This decision was made in consultation with biologists from the Ministry of Forests, Lands, Natural Resource Operations and Rural Development (FLNRORD), as well as the Provincial Wildlife Veterinarian.”

“The wolf was not taken back to Discovery Island as it left for a reason – it may have been looking for food or resources. For the safety of the public and the animal, the wolf was relocated out of the urban environment in Victoria. The provincial hunting regulations are administered by FLNRORD.”

The conservation officer service says its investigation is ongoing and further details will be released as they become available.

This article was first published by CTV News on 25 March 2020.

@wolfhaven Unforgivable. Makes my heart ache and my blood boil.

Too bad. This article reads to me as if all the layers of bureaucracy have expressed an ‘oh well’, “that’s the way it goes”. Almost a cavalier approach. Is it wolf hunting season?

Why do people kill wildlife? The lone wolf dead…why such hatred of animals? Just goes to show how much one hates themselves to shoot and kill an exotic species….

some people truly are a waste of oxygen

When are we going to stop trying to prove our “manhood” by killing defenceless animals. The low-life that did this needs lobotomising!!

I expect the low-life piece of human trash ‘hunter’ is sooo proud of themselves that they have killed a ‘tagged wold’ I expect they’re bragging about it on their social media site and expecting lots of ‘pats on the back’ for being such a jolly, good shot…..NO, he/she is NOTHING but an animal murderer, don’t worry I sincerely hope Karma pays you back tenfold, you miserable POS. The only good hunter is a dead hunter, with their head mounted on the wall as a trophy, so ridding the world of the yet another animal destroyer. What will they hunt when… Read more »