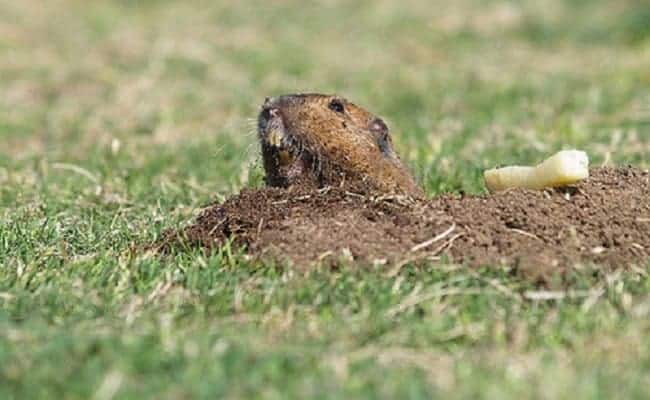 Apparently inspired by the movie “Caddyshack,” the Trump National Golf Club in Rancho Palos Verdes, Calif., is dealing with gophers, squirrels and other critters in an unusual, cruel and illegal way: by shooting them.

In “Caddyshack,” groundskeeper Carl Spackler, played by Bill Murray, tries unsuccessfully to kill a destructive gopher using several cartoonishly violent methods, such as by shooting it with a rifle and blowing it up.

It’s not Carl Spackler, but in several disturbing photos published in the Daily Breeze, a man can be seen taking aim with what appears to be a rifle as he’s being driven around the 18-hole Trump National Golf Club in a golf cart.

In the city of Rancho Palos Verdes, it is illegal to discharge weapons, with the exception of shotguns, which can only be fired to protect agricultural crops, and only with a city permit. The Trump National Golf Club did not apply for a permit, the Daily Breeze reports.

Nor did anyone at Trump National bother to notify local law enforcement agencies that a weapon would be fired on the course. Lomita sheriff’s Lt. Alise Norman told the Daily Breeze that if a weapon is intended to be used, course executives should let law enforcement know about it to avoid confusion or a police response.

The incident is now under investigation by the city of Rancho Palos Verdes. City Manager Doug Willmore told the Washington Post the man in the golf cart was a contractor using a pellet gun. The shooter could be charged with a misdemeanor for violating the city ordinance, and face a maximum $500 fine or six months in jail.

So far there have been no comments about the photos from Trump National or its owner, Donald Trump – whose presidency, the Humane Society of the United States warned last year, would be “a threat to animals everywhere.” This seems to include critters on his golf courses.

How do other local golf courses deal with gophers? Firearms are never used on the 20 Los Angeles County golf courses, and the county parks and recreation staff never uses guns, spokesman Terry Kankari told the Daily Breeze. The manager for a privately owned golf course near Inglewood, about 25 miles north of Trump National, said it uses more conventional methods, like traps and poison, to control gophers and other animals.

Yet Trump National isn’t the first golf course to deal with animals so violently. Six years ago, two men were arrested after they shot raccoons and skunks on a Wisconsin course. In 2014, a group of hunters were legally permitted to shoot and kill Canada geese on a Minnesota golf course.

Some people have jokingly suggested a better way for Trump National to deal with its gopher problem: Put up a wall.

This was the second time in two weeks that the Trump National Golf Club has been in the news, or as its owner would probably call it, the fake news. In a July 18 article, the Washington Post reported that revenues from greens fees have dropped 13 percent since June 2015, when Trump entered the presidential race. Charities have relocated fundraising golf tournaments to other courses, and Hollywood no longer uses it as a filming location.

“It’s just dead all the time,” the lone golfer there one afternoon told the Washington Post.

In fact, that’s why Daily Breeze photographer Chuck Bennett was there in the first place.

“I live on the coast so I figured I’d see if I could get the barren, empty course on my drive home,” he told the Washington Post. “The place is deserted.”

The Trump National Golf Club needs to find a more humane way to deal with gophers and other critters. Please sign this petition telling the club to stop shooting them.

Conservatives lack any empathy and think the only solution to a problem is to kill it. There are non-lethal ways to deal with these type of animals if you are not too lazy and aren’t an asshole.

Too bad Pres. Trump’s name was associated w/ this reminder of what all golf courses do, “Slaughter The Animals, Poison The Earth” (Jack Olsen, 1971) Whereas the issue of how most of humanity continues to treat, since the caveman, all other non-human living being w/ disrespect & unspeakable cruelty, some persons even describe their slaughter as ‘required harvest’ for arbitrary human benefit & reduce the issue to one of Party politics.

sickening .such cruel behaviour is pathetic and so wrong

Murdering and torturing animals who Nature endowed with the RIGHT to be here — and poisoning the earth — so a bunch of rich guys can play with a ball in a hole. This is unnatural, immoral and unbridled patriarchy. Stripping the land of richly biodiverse individuals who made the earth healthy while we make the planet sick with our violence and perversely reducing life to weakened monocultures. It’s time to turn the tables because this domination by human male killing is literally killing our wildlife, our earth and ourselves. It is we who are out of control and need… Read more »

‘Mankind’ has to ‘manage’ everything even when it doesn’t need managing. That is why this world is in the total mess it is … and America … well America … a lot can be said about the mess that country is in right now and all because of ‘managerial mindset’ We need to take a step back and start to remember about ‘live and let live’. Animals and humans. Life would be so much better if we all just accepted the diversity amongst us and stopped making ridiculous and pathetic excuses to exterminate something or someone we dont like or… Read more »

‘Commonsense’ a lost natural art in the liberal mindset. Mankind produces a garden to feed many, shoots ground hogs to maintain the ‘required harvest’. Mankind produces a place to relax from culitivating and protecting his source of food, shoot ground hogs which are destroying his efforts and could again threaten his crops. What he doesn’t realize is, he could trap the ground hogs and sell them to liberal democrats as pets….but NO,,,,the liberals won’t buy them to protect them.

Conservatives don’t appear to be hardwired for common sense compassion or the ability to co-exist, not even the Christian faction. For all your biblical,’Thou Shalt Not Kill’ blather, there is no living being here on God’s green Earth that you don’t enjoy murdering. None. While we Pansy assed Libtards find our joy in Nature’s beauty (as well as the role that non-human beings play in the balance of our one shared planet as they go about their lives) you take delight in unapologetically destroying these same beings that cross your spiritually impoverished path. Your Jesus would weep, but mine would… Read more »

Tierra Chapman On now, all that straw you’re carrying is going to cause a mental hernia—“Straw-man Arguments” only prove you’re inability to reason objectively and morally. Fact is. ground hogs on a person’s property, destroying property are in fact approved by the Biblical God Jesus of Nazareth to harvest. Just as feral hogs which destroy property are also harvested in order to protect what God has given me as a blessing for my dedication to serving His Will on earth. Liberals never liberate humans, because animals are more important to them. Why is that? Simple, liberals hate humans and themselves… Read more »

David Douglass You sir are full of shit. Liberals hate humans? Then why are we always trying to feed, clothe, educate, vaccinate, and work really hard to ensure CONServatives don’t tke away healthcare, afterschool programs, social security, and other programs that help people? And yes, we also try to protect animals because they need protecting from the greedy who only see them as a source of income to be used or as a problem to be killed.

Margaret Hodgkins you are completely insane. Conservatives are the greatest monetary charity givers by far of any group or ideology. Name one thing Socialism ever achieved. I can name thousands of achievements from Capitalism—such as FACEBOOK, lol. And of all charities to the poor, needy, uneducated and healthcare, the conservatives stand alone…..the overwhelming majority of religions are….wait for it…..conservatives. Liberals achieve the very opposite of their title, they enslave people, such as the democrat party of the blacks, Hispanics and anyone they desire to control. Poor little Margie, hating the facts, hating reality, hating the responsible management of the animal… Read more »