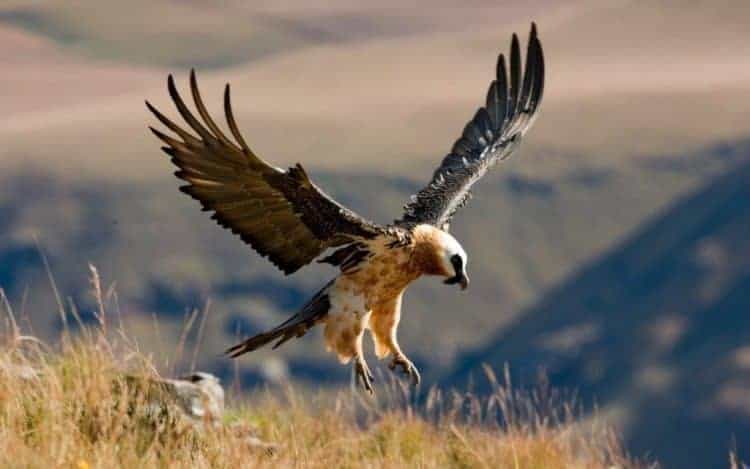 Pascal Orabi, coordinator of the LIFE GYPCONNECT conservation project, explains how the Raptors Task Force at LPO (BirdLife in France) is working to reconnect populations of Bearded Vultures (Gypaetus barbatus) in the Alps and the Pyrenees.

The soothsayers of ancient Greece looked to the skies, interpreting the will of the gods in the behaviour of birds. All matters of war and peace, of house and state alike, were acted upon only after ‘taking the auspices’ – carefully studying the direction of flight, the number in the flock, and the shrill sound of chatter and chirps.  Amongst the favoured species, the Bearded Vulture (Gypaetus barbatus) soared proud and high as a great bird of prophesy.

Therefore, we perhaps have reason to hope that LPO’s LIFE GYPCONNECT project – dedicated to restoring France’s populations of Bearded Vulture (and branded after its French name, Gypaète barbu) – is a sign of good things to come for this iconic species here in Europe.

The gaze of the ancient Greeks was doubtless drawn by this bird’s unmistakable silhouette – unusually for a bird of prey, it has a lozenge-shaped tail; and unusually for a vulture it does not have a bald head. But it is its old name that best explains why this bird has captured imaginations for centuries, Ossifrage – literally ‘breaker of bones’. With its taste for bone, the bearded vulture can ingest bones up to 280 mm long and 40 mm wide without difficulty; and it is known for carrying bones in flight before dropping them onto the rocks below, before spiralling down to devour the pieces.

For a species more recently named for its black, beard-like bristles, it had some alarmingly close shaves with extinction in Europe. In the 1920s and 1930s, the Bearded Vulture all but disappeared from the Alps. But in the late 1970s, conservation teams working with the European Endangered Species Program (EEP) began to introduce vultures (that had been bred in captivity) into the Alpine regions of France, Italy, Austria and Switzerland.[1] By the mid-1990s, the reintroduced vultures began to breed in the wild and, over the years, 173 chicks have been counted.

While it’s heartening that numbers in the Alps appear to be growing, there remains a persistent divide between the populations in the Alps and those in the Pyrenees. Through the LIFE GYPCONNECT project (launched in 2015), LPO aims to bridge this gap and, quite literally, connect the two populations. The goal is to establish one big ‘metapopulation’ by the end of 2021 that, though spatially separated, remains fundamentally connected as individual members fly from one mountain range to the other.

LIFE GYPCONNECT is just one part of a global push to save 15 species of ‘old-world’ vulture species. Indeed, this very week, we are witnessing a truly historic moment in vulture conservation:  70 top vulture conservation scientists are, right now, gathered at Monfrague National Park, Spain’s veritable ‘Vulture Kingdom’, to discuss the plight of the Bearded Vulture as well as three other African-Eurasian species: (i) Egyptian Vulture (Neophron percnopterus); (ii) Cinereous Vulture (Aegypius monachus); (iii) Griffon Vulture (Gyps fulvus)). The name of the meeting is as long as the famous wingspan of the birds that prompted it: the Multi-species Action Plan to conserve African-Eurasian Vultures (Vulture MsAP). Yet, what it lacks in terms of title, it gains in terms of ambition. Here, they are urgently discussing how to protect these species from the everyday perils (poisoning, collisions with power lines, food scarcity) that could threaten them with the same fate suffered by Asia’s vultures – near extinction.[2]

In the light of this, LIFE GYPCONNECT is an integral piece of the global vulture conservation puzzle. The project, supported by the European Commission is promising: it draws upon decades of local and international conservation knowledge and experience in the field of species reintroduction. If successful, it will not only safeguard les gypaètes barbus, but will also bring much welcome recognition for the need to implement similar projects for other vulture species. So like the ancient Greeks, let us look to the skies and observe the flight of the Bearded Vulture, searching for signs of things to come.

For more information on the LIFE GYPCONNECT project, visit: http://gypaetebarbu.fr/life-gypconnect/

[2] Similar meetings are taking place in Africa, Asia and the Middle-East. The outcomes from each meeting will be pooled and redeveloped, under the auspices of the Convention for Migratory Species (CMS), into the first global Action plan for all 15 old-world vulture species.