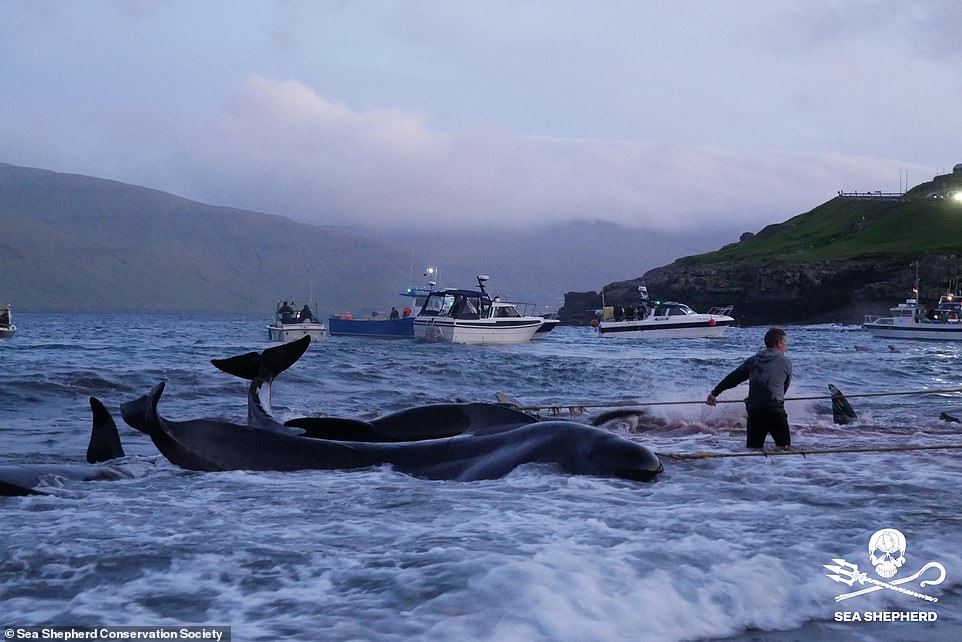 Hunters in the Faroe Islands have killed 175 pilot whales, turning the sea red with blood after boats drove the animals towards the shore where men waited in the shallows with hooks, knives and spears.

A gunman even fired a shotgun at a drone which was sent by Sea Shepherd marine conservationists to document the carnage, known as the Grindadrap or Grind in Faroese.

Faroese are divided on the Grind but many urge foreign media and NGOs to respect their traditional island culture where fishing retains a central place and all the whale meat is kept for food.

Sea Shepherd says the practice, which has killed more than 6,500 whales and dolphins over the last decade, is unsustainable and ‘barbaric.’

In the early hours of Sunday, a pod was spotted off the coast near the town of Vestmanna, with it staying light throughout the night in the Danish archipelago.

Hunters grabbed their killing tools, gaff-hooks, lances and knives, as they hurriedly jumped into around 20 boats which sped off to corral the whale pod towards the beach at Leynar. They killed 52 pilot whales there.

But that spree would be dwarfed hours later, when another pod was spotted off the south coast and crews sailed out to drive them towards the town of Hvannasund where 123 whales were slaughtered by huntsman waiting for them on the beach.

Drone footage shot by Sea Shepherd shows a boat riding into a group of lagging pilot whales in an apparent effort to shove them up to the shore. The drone descends to get close to the vessel, showing exhausted whales thrashing around in the water as the boat’s engine blares next to them, but it is suddenly knocked off course.

As the flying camera jerks backwards violently a man with a shotgun is seen pointing his barrel at the drone. Sea Shepherd said this was the foreman of the hunt.

Photos later revealed how the pellets had torn holes into the drone but fortunately it was able to get back to conservationists who recovered their footage from it.

Sea Shepherd said: ‘The killing at Hvannasund was poorly organised and more brutal (than at Leynar), as often we have filmed before at this location.

‘A small drone operated by one of our crew above the bay was filming a Faroese Nordsjø 640 WA boat which was deliberately ramming itself into, and right over a group of whales who were resisting being driven into the waiting hooks and knives of the killers.

‘Spotting the drone in the sky over the water clearly raised the anger of one of the Faroese grindamaður (or grind foreman) who aimed a shotgun at the drone and fired at least once while standing in the middle of the crowd.

‘The drone was hit and damaged in several places on it’s fuselage, on one of the rotor blades, and one lead pellet passed straight through the centre of the drone. Despite this, and with one piece of lead shot embedded in the drone – the pilot skilfully managed to fly it back over the bay to retrieve the footage.’

Sea Shepherd said they had reported the incident to the police who are probing the shooting.

The animal rights activists have been operating in the Faroes since the early 1980s, taking direct action against the Grind with their own boats.

However, in 2015, changes to legislation prevented any Sea Shepherd boats from interrupting the hunt and so it launched a land-based crew to tackle the Grind by documenting it with photographers stationed on the shore and drones in the air.

Robert Read, chief operating officer at Sea Shepherd, said: ‘The grindadráp is a barbaric relic of a bygone age. A needless hunt of hundreds of pilot whales and dolphins which should have ended a century ago which is not needed to feed anyone on the islands.’

After a pod is located, the Faroese drive the animals often for many hours with recreational boats, fishing boats and sometimes even jet-skis together creating a ‘wall of sound’ from their boat engines to force the pod towards the nearest designated killing bay.

Men waiting in shallow waters rush into the sea, dragging the whales alive with ropes attached to gaff-hooks which they ram through the whale’s blowhole.

Killers closer to shore then attempt to sever the whale’s spinal cord with a lance and then us a knife to cut down through the animal’s neck.

It can take a long time before the last of the whales and dolphins are killed, left thrashing around in blood-filled waters while boats block any escape.

This article by Ross Ibbetson was first published by The Daily Mail on 29 June 2021. Lead Image: In the early hours of Sunday, a total of 51 pilot whales lost their lives on the killing beach at Leynar in a Faroese Grindadrap hunt.