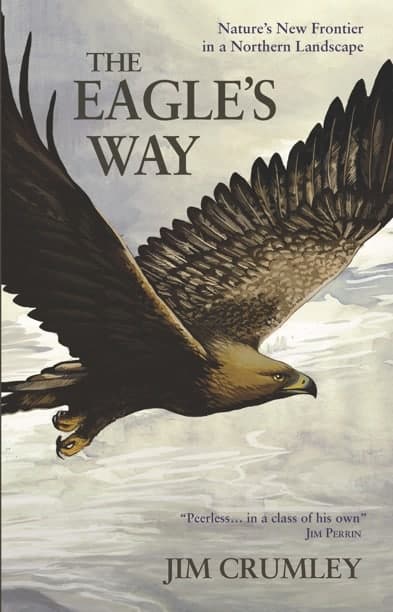 Last season I read “The Last Wolf” by Jim Crumley and spent a little time afterwards reviewing it. His most recent publication came out this year and is very apt for my new position at Mull Eagle Watch on the Isle of Mull. “The Eagle’s Way” is a book focusing on the two eagle species we have in the UK, the changes following the reintroduction of the white-tailed eagle and how they will shape our skies in the future. Jim Crumley is a nature writer with over 25 years of experience. He has a great way with words; he can captivate you, pick you up and transport you to a faraway hillside with red deer and golden eagles.

The book begins after a short prologue, starting with Orkney and the Tomb of the Eagles at Ibister, South Ronaldsay. Crumley explores the historic, cultural and spiritual links we as humans hold with eagles. He ponders over the fact that we have no such relationship with the eagles now; we cannot compare ourselves to our Stone Age ancestors whom entrusted eagles with sacred services.

They had deep links with eagles, deep enough to bury eagles alongside their kin, talons and bones of these ancient birds still exist, you can even go and hold them Crumley did so and it affected something deep within in. He was overwhelmed by the fact that this age old man-eagle relationship may have been reborn.

He spends a few chapters describing his first encounters with white-tailed eagles in Scotland following the reintroduction programme. This is great writing, enthralling accounts of stumbling on eagles, and not the eagles Crumley was used to seeing; instead a larger, more tolerant and surprising bird; the mud-walking, tide following, colossal, collapsing parachute of a bird, this is his first insight into the white-tailed eagle.

But then he seems to put a negative swing on the nature of the reintroduction, tarring it with dirty human hands, a distasteful man-made situation. Crumley claims that the rapid population growth of the sea eagles will overtake our existing golden eagle numbers, apparently causing serious implications for eagle-watchers but for nature itself.

The population will eventually overtake the golden eagles as is the historical balance for the two species which have evolved together over countless years. Casting this disheartening opinion on the successful reintroduction is surely giving fire to those few people who are already calling for a cull of eagles for various reasons.   Then comes another moment which Crumley manages to make the hairs on your arms stand to attention or cause an involuntary shiver down your spine, great writing can do that, especially great writing about eagles.

This is one moment that captivated me and captures all that an eagle is: “They don’t inhabit the world as constrained by the window of a hide or the lens of a camera. They inhabit the world, this world, this three-dimensional territory, with a mastery of airspace as utter as any creature that ever drew breath. Nothing is beyond them here: 100 mph in a shallow glide with wings half folded and un-beating, a 3000-foot free-fall that ends 50-feet above the ground and segues into a 1000-foot power-climb then another free-fall and the softest of soft landings on the frond of a rowan sapling”.

Again Crumley then voices his annoyance at our human interference, giving a sad story to the eaglets that were taken from Norwegian nests to become Scottish ambassadors. He claims that we brought them into fear and terrorised them with wingless-creatures and food that was of the land and not of the waters around Norway. We brought them to cages with no comforting presence, with no parents to learn from and then we encumbered them with tags, transmitters and rings.

Crumley even compares a tagged eagle to a criminal. I completely disagree with this whole sob story, of how we shouldn’t be involved, we shouldn’t be touching eagles and uprooting them from their country. We are responsible for the white-tailed eagle becoming extinct, not us personally but our ancestors. If that link with eagles and our distant ancestors Crumley felt at the tomb stood for anything, he should understand why we had an obligation to bring them back.

We shot that last bird in 1918, removing a whole species from our country. We are responsible. We’re only a handful of generations on from that, with parts of our country still clinging to this Victorian era of killing. We had an obligation to bring those birds over from Norway and reinstate them.

The comments on human tags and transmitters is vital, as monitoring and research is for many species, modern science will be key to conservation, Crumley seems to be held back, old fashioned. Although, if it were golden eagles being tagged for conservation in Scotland, I doubt he would mind.

I enjoyed the book overall, the moments that you are enthralled and find yourself on the windy hillside with a pale female golden eagle, golden plover and wrens compensate for the few comments that I really don’t agree with. But, most of these moments are golden eagles, golden eagle habitat and it is obviously the golden eagle that has enthralled Crumley.

I think he loves wildlife and nature in general, he appreciates seeing a white-tailed eagle of course but I don’t think he see them as a Scottish bird, I think he sees them as a Norwegian intruder.