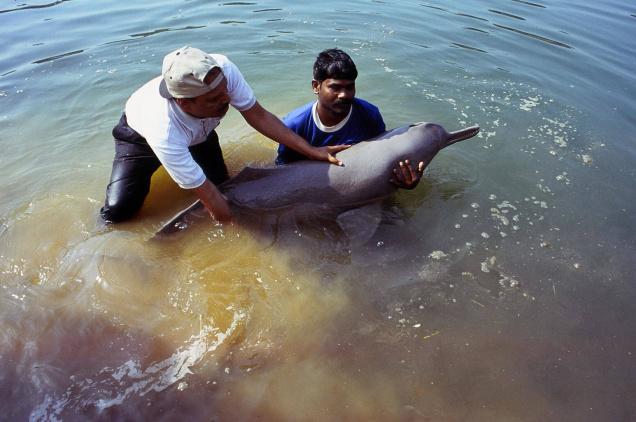 It can only be considered an extremely positive step that the Gangetic River Dolphin (Platanista gangetica gangetica) has now been notified as the national aquatic animal. The decision was taken in the first meeting of the recently formed National Ganga River Basin Authority that was chaired by the Prime Minister, Manmohan Singh. The move has received an enthusiastic welcome by the conservation community.

Writing in the November issue of the journal ZOO’s Print, Dr. Randall Reeves, Chairman of IUCN/SSC Cetacean Specialist Group, expressed his pleasant surprise, “..to see the small and somewhat cryptic freshwater dolphin occupying the ‘throne’ of national aquatic animal…All things considered,” he continues, “it is an admirable decision by the Central Government to give this honour to the susu(as the Ganga dolphin is often called in India).”

The population of the endangered Gangetic Dolphin in India today is only about 2,000 individuals spread over the rivers of the Gangetic basin and the Brahmaputra river system. The dolphin and the rivers they live in are inextricably linked — something that can be seen in the way the creature has evolved to survive in these rather specialised environmental conditions. For one, these dolphins are almost blind — the turbid waters of the river systems having made the use of eyes almost redundant.

The eyes are merely pin holes, have no lenses and are believed to be used only to differentiate between light and dark. They mainly use echo-location to find food along the floor of the river. They also exhibit another peculiar characteristic of swimming on the side, dragging one flipper against the muddy river bed. This, it is believed, enables them to navigate in water streams with low water depth, a well known characteristic of the seasonal rivers in the sub-continent.

Tied to the river

The water levels and flow patterns in rivers also greatly determine the spread and the migration of the dolphins. They are known to collect in deeper parts of the rivers with a preference for areas with eddies in the dry periods from October to April, and migrate to other stretches in the monsoons when the water levels rise.

The health of the river, then, is crucial to the long-term well-being of the dolphin.

While poaching for oil, fishing and accidental entanglement in nets are important concerns, there is evidence that dam and barrage construction is one of the biggest threats to the dolphin across its entire range. A 2006 WWF Nepal report points out, for instance, that “Barrages on the Mahakali River (Sarda in India) at Banbasa on the India-Nepal border in 1928, and at Sardanagar in 1974 about 160 km into Indian Territory, have resulted in the extinction of dolphins from the Mahakali River.”

Dams and barrages not only fragment dolphin populations, they also degrade downstream habitat, create reservoirs with high sedimentation and change the fish and invertebrate species found in the waters. Luxuriant growth of macrophytes and excessive siltation have, for example, eliminated suitable habitat immediately above the Farakka Barrage and reduction in water availability downstream of the barrage has eliminated dry-season habitat for more than 300 km.

The other big concern is the increased pollution of rivers caused by chemical pesticide and fertilizers runoff from agriculture and the indiscriminate release of untreated industrial effluents into rivers.

Research by a team led by Dr. Leo Yeung of the City University of Hongkong recently revealed that a huge pollutant load enters the Ganga at its confluence with the Yamuna in Allahabad. Their paper, published in the March 2009 issue of the journal Chemosphere, points out that “…(the Yamuna) is also one of the most polluted rivers in the world, especially around New Delhi, where approximately 57 per cent of the city’s wastes are discharged into the river. There are approximately 45 major industries, including coal-based thermal power plants, fertilizer, food processing, textiles, insecticide manufacturing, and electroplating located along the river.”

The waters of the Yamuna and most of our other rivers that have been the source of life and nourishment for centuries are, now, almost dead themselves. The impact this has on the dolphins and other plant and animal life in the water and the millions of people who live along these rivers can only be imagined.

The fate of our rivers are symptomatic of deep and underlying problems with our development process where damming of rivers, chemicalisation of our agriculture, rapid industrialisation and urbanisation have been given priority over everything else. More than 168 large dams, for instance, have been planned in the Brahmaputra river basin alone, with little realisation that this will change the entire up and down stream ecological systems and adversely impact the dolphin. It is precisely these kinds of developments that are working as a noose around our rivers and the diverse life found in them.

Recognition of the dolphin as the national aquatic animal has been followed by commitments for their protection in Bihar and Uttar Pradesh. A further interest in the dolphin has also been spurred in Assam, where the creature was declared the state aquatic animal over a year ago. If the dolphin must have its day, good intentions alone will not suffice. The Gangetic dolphin is one of only three surviving species of freshwater dolphins on this planet. The fourth one, the Yangtze River Dolphin in China, went extinct as recently as 2006. A lot will need to be done if the Gangetic Dolphin is to avoid a similar fate. A declaration that accorded it national status will have, otherwise, amounted to nothing more than symbolic lip service.

This post was written by Pankaj Sekhsaria and published by the Hindu.