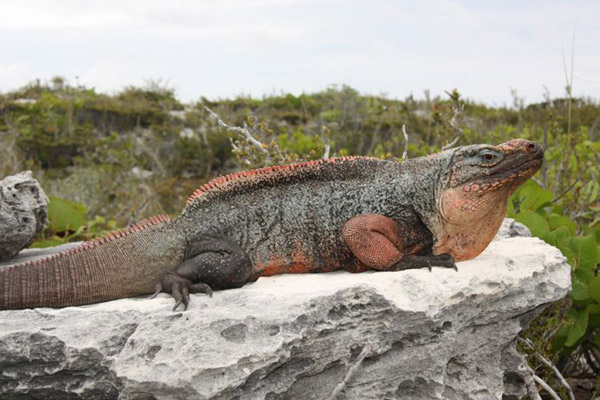 Before the arrival of humans—with their dogs, cats, and wild pigs—the northern Bahamian rock iguana ruled its home range, being pound-for-pound among the biggest land animals on the islands. In these ecosystems, the iguana’s were the mega-grazers, the bison and elk of the Caribbean one might say. But hunting by humans, invasive species, and habitat loss knocked the king from its throne: pushing it into smaller habitats and decimating its population. Today the three subspecies of the northern Bahamian rock iguana (Cyclura cychlura) hang by a thread. And now a new threat is rising: poorly-regulated tourism, including iguana feeding.

Lucky for the iguanas they have a champion: Chuck Knapp with Chicago’s John G. Shedd Aquarium has spent nearly 20 years working with iguanas in the Bahamas, including conservation efforts, research, and education. Knapp is also the co-chair on the IUCN iguana specialist group.

Recently Knapp spoke with mongabay.com about what drew him to the iguanas of the Bahamas and what needs to be done to ensure the iguanas still have a kingdom to call their own.

I have always been passionate about fish and always wanted to work at Shedd Aquarium. I participated in Shedd’s High School Marine Biology program and volunteered before getting a job as an aquarist.

Mongabay: How did you become interested in reptiles, particularly iguanas?

Chuck Knapp: I have always been fascinated by fish and it was only after I was responsible for the iguana exhibit at Shedd Aquarium that I became obsessed with iguanas. It’s hard to describe the reasons why these animals have such a hold on me. After just three days of caring for the iguanas, I wanted to contribute to their survival through research, education, and advancing conservation policy.

Mongabay: Can you give us an overview of how the northern Bahamian rock iguanas are faring?

Chuck Knapp: The northern Bahamian rock iguana is divided taxonomically into three subspecies. Two subspecies are found in small, uninhabited islands on the Exuma Island chain in the central Bahamas; they are listed as Endangered and Critically Endangered by the International Union for Conservation of Nature (IUCN). These iguanas inhabit very small islands (average 14 acres) and so the threats from a hurricane or disease extirpating a population are real. Also, yachtsmen often bring their cats and dogs to islands, and these domestic animals prey on adult and juvenile iguanas. Finally, people move animals for a variety of reasons, and the increasing level of tourism on the Exumas brings people up close to these once-reclusive reptiles. Tourists often bring food to tempt the iguanas closer for an encounter, which can modify individual animals’ behavior and impact the health of populations. Some populations inhabit islands within an existing national park but enforcement of environmental laws is challenging because of the remoteness of the cays and financial constraints.

The third north Bahamian subspecies is considered Endangered by the IUCN and inhabits Andros Island, which is the largest island in the Bahamas and firth largest in the Caribbean region. Andros is inhabited by people, and therefore these animals face a unique suite of threats relative to the rest of the archipelago. On Andros, historic logging pressure destroyed large tracts of iguana habitat, and the logging roads opened the previously remote interior pine forests to hunters and feral animals. Pigs were released on the island for sport hunting, and now the feral hogs decimate iguana nests. Feral cats and dogs roam the island interior and hunt iguanas. The iguanas are still taken for food by local islanders. Thankfully, in 2009 the Bahamas National Trust expanded West Andros National Park to encompass critical iguana habitat and populations in part because of Shedd’s research.

Mongabay: Tourism actually poses one of the major threats to these iguanas. Will you tell us why?

Chuck Knapp: To be sure, a well-regulated tourism industry can benefit wildlife by providing economic benefits to local stakeholders, offering incentives to protect species and habitats, and increasing educational opportunities. However, an increasingly popular tourism-related activity is the deliberate feeding of wildlife with minimal understanding of potential health impacts. Food provisioning by tourists, especially with unnatural and inappropriate food items, can potentially decrease fitness by providing low quality or even detrimental dietary additions. North Bahamian rock iguanas, for example, are vegetarians, but tourists often offer them bread and meat. However, the issue of tourism and wildlife feeding is complex, especially in countries heavily dependent on tourism revenues, since the short-term socioeconomic benefits are immediate whereas the potential long-term negative ecological consequences are uncertain.

Tourism companies throughout the Bahamas and Caribbean are increasingly marketing the feeding of endangered rock iguanas as part of their activity packages. In the Exuma Islands, the number of visits to iguana-inhabited cays, with associated feeding, have increased from approximately 20 persons per day in the 1980s to currently as many as 150 per day on cays visited by tourism operators using fast powerboats from Nassau. The economic successes of these tour operators have prompted others to bring hundreds of tourists per week to visit and feed iguanas inhabiting other cays. At the same time, visits by individual tourists are also on the rise. Daily island visits have caused behavioral changes and unnaturally high densities at primary landing beaches where iguanas are fed. To advance responsible and sustainable management of wildlife tourism involving iguanas, Shedd scientists, along with our colleagues and Bahamian partners, investigated the physiological responses of iguanas in the Exumas faced with both human-visitation and associated artificial food provisioning. Our study suggests that food provisioning is impacting the health of iguanas and could potentially have severe consequences for such a long-lived animal.

Chuck Knapp: Though hunting appears to be declining, it still remains a threat on some islands. Additionally, because certain iguana populations are desensitized to humans, they are easily approached and have been taken as food by unscrupulous tourists.

Mongabay: What role do these iguanas play in the ecosystem?

Chuck Knapp: The iguanas are the largest native herbivores on islands where they occur and play a vital ecological role by regulating plant communities in the dry forests and scrub habitats that they inhabit. They serve as seed dispersers and modify vegetation structure via repetitive cropping. Their imperiled status threatens the biotic integrity of these communities and other species that occupy these habitats.

Mongabay: What needs to be done to protect and increase these subspecies of iguanas?

Chuck Knapp: The Bahamian government has been proactive in setting aside protected areas for iguanas. We need to increase enforcement of existing wildlife protection laws and establish new tourism regulations to ensure that populations remain safe over time.

Mongabay: Most people associate the Bahamas with beach vacations. Should that view change to include imperiled wildlife?

Chuck Knapp: The Bahamas currently leads the region in both number of tourists and tourism revenues and has great potential to promote two tourism markets because of the fragmented, insular geography of the country. The two markets are: the mass tourism sector for resort and cruise ship clientele centered in Nassau and Freeport; and the ecotourism market concentrated in the Out Islands (islands other than New Providence and Grand Bahama). Both tourism markets serve a role and contribute to the overall economy of the country. Some tourists visiting more remote areas may consider wildlife and wildlife impacts during their vacations, but the majority of tourists on the main islands aren’t aware of the role that they can play in protecting the Bahamas’ native species. In reality, every visitor to the Bahamas can support healthy wildlife populations by choosing to buy souvenirs, crafts or curios that are not derived from animals or plants. Similarly, no matter how acclimated wildlife seems to be to the presence of humans, tourists should appreciate wild animals from a distance and never approach or touch them. By respectfully enjoying wildlife and habitats, tourists can potentially contribute to their conservation by providing economic benefits for Bahamians and thus increasing incentives to lessen tourism impacts.

Mongabay: How can people help the northern Bahamian rock iguana?

Chuck Knapp: People can help the iguana on a variety of levels. The most immersive opportunity is to participate in Shedd Aquarium’s citizen science program and help monitor remote iguana populations. Each year members of the public join Shedd scientists aboard our research vessel, the Coral Reef II, and assist with hands-on research and monitoring. This is a unique opportunity to participate in authentic research and travel to remote and beautiful locations. Nearly two decades of research conducted with the assistance of citizen scientists has directly increased our understanding of Bahamian rock iguanas and contributed to theirconservation.

If people are pet owners, they should ensure that any new pets (including iguanas) are bred responsibly, not taken illegally from the wild. Finally, people can visit the websites of conservation organizations such as Shedd Aquarium, the International Union for the Conservation of Nature (IUCN)- Iguana Specialist Group, and the International iguana Foundation to learn more and donate to iguana conservation efforts.