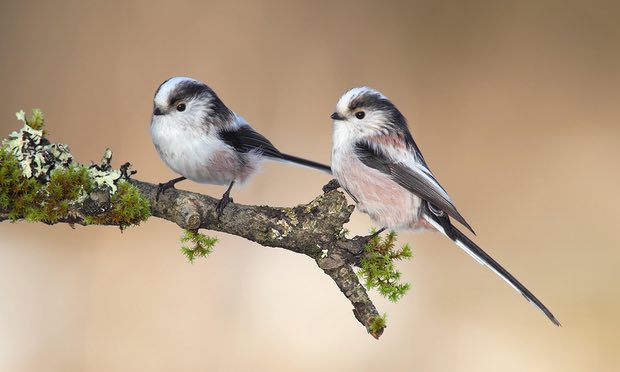 A brief, high-pitched “see-see-see” sound, followed by the appearance of half-a-dozen tiny balls of fluff, each attached to what looks like a protruding stick. Then, more calls, as these flying lollipops flit from one tree to the next, pause, grab an invisible insect, and then move rapidly on.

Encountering a flock of long-tailed tits on a frosty January day is always a delight. Few other birds so immediately provoke a smile, for few other birds are quite so… well, adorable is the word that most readily to mind. When you discover that – as my friend and fellow nature writer Dominic Couzens puts it – the long-tailed tit is the only small bird that spends Christmas with its family, then their status in the pantheon of cuteness is confirmed.

Am I falling for the nature’s writer’s greatest sin: anthropomorphism? Perhaps; yet as with other species that tug at our heartstrings, from the song thrush to the robin, I find it increasingly hard not to attribute human qualities to certain birds.

With long-tailed tits, it’s not just their endearing appearance: pink, buff and black, with that tiny bill and impossibly long tail. It’s also their sociable habits: youngsters from a previous brood will often help their parents raise the next one, in what scientists call “co-operative breeding”. And you simply never see a lone long-tailed tit; one is always followed by another, then another, until a host of them are flitting around you, seemingly fearless of this great, lumbering mammal in their midst.

When I was growing up, I didn’t see long-tailed tits anything like as often as I do nowadays. This isn’t because I was any less observant; this species really has bucked the trend of songbird declines, having almost doubled in numbers since the 1980s.

Partly, that’s down to a run of mainly mild winters. Like other small birds such as goldcrests, long-tailed tits are especially vulnerable to long spells of cold weather, which make it harder for them to find food and keep up their energy levels. But it’s also because they have changed their habits: they are seen in gardens far more often than they used to be, and have learned, in the past decade or so, to come to bird feeders.

I often see them in the hedgerow that runs alongside our garden, but until very recently they never came to the food we provide for the birds. Then, just before Christmas, my wife Suzanne put out some coconut shells filled with fat. Since then, we have regularly seen these little sprites only a few inches from our kitchen window, enabling me and the children to enjoy stunning views of these normally flighty birds.

The poet John Clare loved them too: calling them “bumbarrels” (after their barrel-shaped nest), as in these lines from his sonnet Emmonsail’s Heath in Winter:

And coy bumbarrels twenty in a drove

Flit down the hedgerow in the frozen plain

And hang on little twigs and start again.

Few words capture the sheer joie-de-vivre of encountering a flock of long-tailed tits quite so well.

This article was first published by The Guardian on 22 Jan 2017.