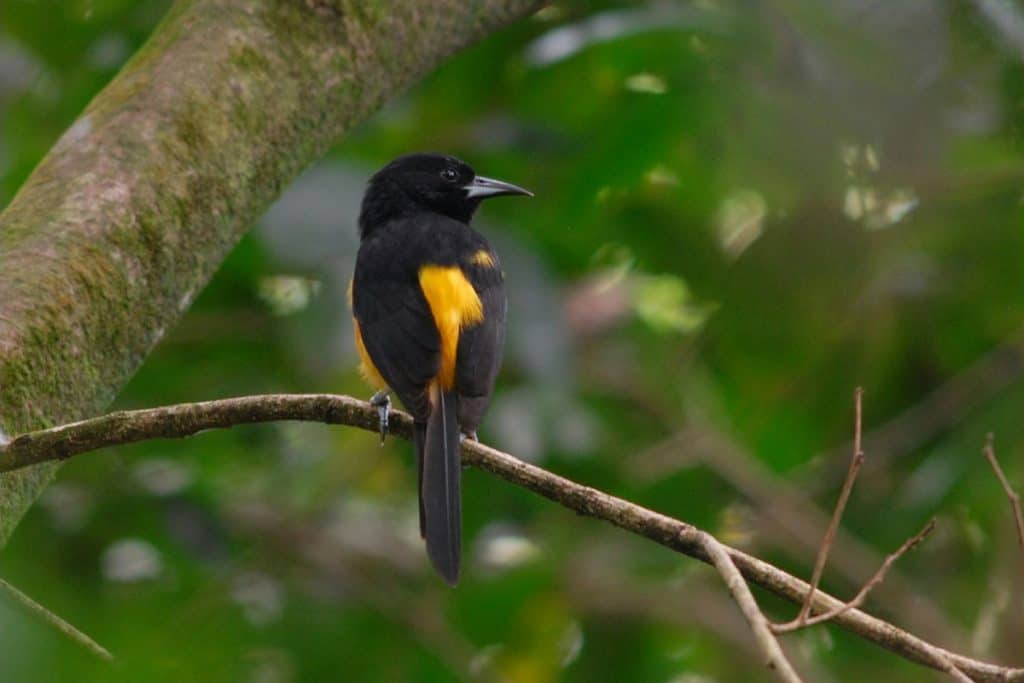 With two thirds of its suitable forest habitat completely destroyed, the population of Montserrat Oriole Icterus oberi dramatically declined after a series of volcanic eruptions during the late 1990s, and suffered from the impact of invasive species. Here’s how RSPB (BirdLife in the UK) and partners turned things around.

Found on the southern part the UK Overseas Territory of Montserrat Island in the Caribbean, the Soufrière Hills volcano is one that is certainly not extinct. Many cannot forget the vicious phreatic eruptions that started in 1995: smoke, steam and lava bellowed out of the tiny Lesser Antillean island, wiping out villages, destroying much of the island’s lush forest and gradually burying the capital city, Plymouth, under mudflows.

Years after the tragedy, the island’s 5,000 inhabitants became accustomed to the smell of sulphur as they continued their lives beyond the “exclusion zone” of relative safety. But with two thirds of its suitable forest habitat completely destroyed, the population of Montserrat Oriole dramatically declined. Regular ash fall and subsequent dry years then reduced this endemic bird’s survival and productivity.

Back in the late 1990s, the RSPB worked with international partners, notably Durrell Wildlife and the Royal Botanical Gardens, Kew, to mount a rescue of some orioles into ex situ care, ensuring the species was not lost forever. Back on the island, the oriole remained at a stronghold in the Centre Hills, but further eruptions in 2001 and 2003 caused heavy ash fall there too, and the population continued to dwindle.

As is the case on most islands around the world, invasive species are a problem for the Montserrat Oriole, with feral pigs destroying its habitat, and rats predating its nests. The RSPB supported local partners Montserrat National Trust and the Department of Environment to designate the Centre Hills as a protected area in 2014, while a management plan is controlling the impact of feral pigs.

Since 2010 there has been a reduction in volcanic activity, and improved efforts in surveying since 2011 have shown that the oriole’s population is currently stable or mildly increasing. Now with a population of over 500 adults, the Montserrat Oriole no longer meets the criteria for Critically Endangered.

Over half of the 100km2 island is still an exclusion zone, which should mean little disturbance for the bird. Montserrat has not been as developed as many of the islands of the Caribbean have been, so still has significant forested areas.

“The future population size of the Montserrat Oriole will always fluctuate, owing to the strong influence of rainfall on productivity and the vagaries of an active volcano,” says Steffen Oppel, Senior Conservation Scientist at the RSPB.

“But, as long as the existing forest can be fully protected, the probability of extinction is fairly low over the next decade.”

Another island-endemic species found in a UK Overseas Territory (Saint Helena in the Caribbean), the St Helena Plover, has also been downlisted from Critically Endangered thanks to the work of the RSPB and local partners. That leaves the UK with only two more Critically Endangered bird species: Tristan Albatross and Gough Bunting, at risk from invasive species on islands in the middle of the Atlantic Ocean. Find out more in the December issue of the BirdLife Magazine.

Living in such difficult places with the threat of non-native species means both the Montserrat Oriole and St Helena Plover will probably always be vulnerable to extinction. But for now the RSPB and partners breathe a small breath of relief that these species are no longer Critically Endangered.

This article was first published by BirdLife International on 20 Jan 2017.