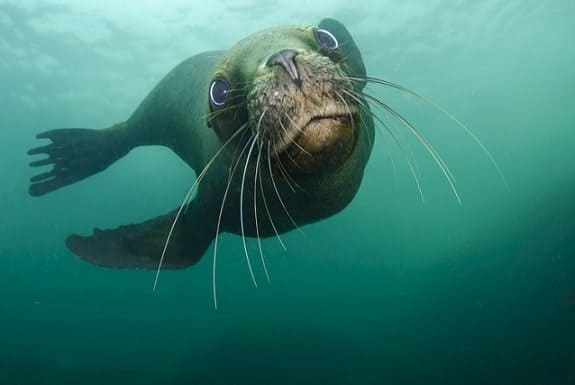 The coastline of La Higuera and Isla Chañaral in Northern Chile is different from any other coastline I have ever experienced. I grew up in New York, next to the East River, with the Atlantic Ocean right around the corner. I have travelled along many different coastlines, from Italy´s Amalfi Coast, to British Columbia´s Queen Charlotte Islands. I am in Chile for the first time, interning at Oceana in Santiago for two months.

The difference between Chile and other countries is that Chile surprises you at every turn. The landscape and weather undergo dramatic changes kilometer to kilometer, minute to minute. We are in Northern Chile in order to further Oceana´s plan to create a Marine Protected Area (MPA). Alex Muñoz, Executive Director of Oceana Chile, and his team have been working with the local communities to achieve that goal since 2009.

We drove into the mountains, which, unlike the Cordillera that surrounds Santiago, look like the desert. They were covered in sparse shrubbery and cacti, punctuated by the occasional guanaco, a species of llama common in Northern Chile. I suddenly couldn´t believe we were so close to La Serena, the nearest big city and the starting point of our trip.

In La Serena, the beach front has been colonized by restaurants and cabañas. Here, it felt as if we were the ones encroaching on the wildlife, rather than the other way around. Even though it was winter, and the cactus flowers had disappeared inside themselves, there was marked beauty in the austerity of the landscape, in the contrasts between the muted tones of the red dirt and dark sea and the bright stripes of sun across the hillsides.

A number of fishing villages are nestled in the curves of the coast. We visited three of them to meet with local community leaders. We were traveling with Cristián Gutiérrez, Oceana´s Socio-Economic Director, who has been to this area many times and has established strong relationships with the communities.

I listened as he spoke to leaders in each community, and was struck by the way in which each person responded so thoughtfully to everything that Cristián said. All were involved in some fishing activity — most were artisanal fisherman themselves — and they seemed to clearly understand the need for action and the benefits that they would be afforded if Oceana´s proposal goes through.

The MPA will not only preserve the wealth of marine ecology, it will also boost the economy through sustainable, artisanal fishing and ecotourism. Currently, certain practices of the industrial fishing boats pose a real threat to the sustainability of the ecosystem.

Artisanal fishing will replace the industrial fleets that overfish and exploit the area, while also stimulating the local economy by developing parallel industries, such as fish processing plants within the towns and management areas –- technically known as TURFS — for abalone or “loco”, which is a local mollusk that can be sold at a very good price.

This growth in fishing could, in turn, lead to a growth in sustainable tourism with more money available to invest in sightseeing vessels and in the training of fisherman as guides.

In the town of Caleta Los Hornos, one woman, named Alicia Palacios, especially impressed me. She runs a seaweed collection business and is single-handedly employing the majority of the women in the town. We spoke to her in the front room of her house which doubled as her office.

A desk and an old computer sat in one corner underneath a window covered by green plastic. Once she started speaking, however, it was clear that she had a more astute grasp of business than many with twice her education (she only went to school until eighth grade).

We continued to Chañaral de Aceituno, another small town where a fisherman took us out on his boat to see the island of Chañaral, one of the two small marine areas in the region that are already protected. After seeing crowds of sea lions and the occasional penguin frolicking on the rocks and in the waves around the island, the fisherman got a call about a whale sighting. We were told that we might be able to find a few humpback whales that were seen headed in our direction.

This was what I had been waiting for; the sea lions we had seen were not so different from those at the Central Park Zoo, but whales? They were a whole different story. I have always found that seeing a whale puts everything in perspective. Their hugeness and the placidity of their movements somehow simultaneously make me feel insignificant, while also making me feel content in that insignificance.

They are both foreign and inexplicably reassuring at the same time. We sped off in the direction indicated by the fisherman on the phone. After about 10 minutes in that direction, we thought we had lost them. They weren´t where he had said they were. But, our guides didn’t stop looking. They turned the boat around and sped off again on a random seeming trajectory.

Just as I was thinking that the search for whales in the ocean is comparable to a needle in a haystack, there they were. Yet another surprise! Two humpback whales glided smoothly toward us, only a fraction of their barnacled backs breaking the surface of the water, the ripples and shadows in the sea around them only suggesting their true size. I shouldn´t have doubted the fisherman, they clearly knew what they were doing.

Just a few kilometers away in the town of Punta de Choros, more than 600 guanay cormorants, penguins and sea lions washed up dead on the beaches a few weeks ago, proving the fragility of these marine creatures. Scientists and government officials alike have ruled out the possibility of natural causes and have pointed to blast-fishing, the use of illegal dynamite by industrial fisherman, as the most likely cause.

A local man told us that the dead guanays that washed up on the shore are “only the tip of the iceberg.” The fishing boats often work in places where there aren’t any beaches, where nobody can see the harm they are causing. In addition, he said, “there are beaches where there isn’t anyone to alert the authorities.”

Punta de Choros is the same place where Oceana successfully stopped the construction of coal fire power plants in 2010. Alex Muñoz believes there is no reason to rest. In order to truly preserve the biodiversity and the way of life of these artisanal fishermen, full protection of this coastline is necessary.

As we drove back down to La Serena, I realized that what I had seen was only a small glimpse of the surprises that Chile holds beneath the surface of its oceans.

This article was written by Alyssa Northrop for Oceana.org – She is currently working as an intern in Oceana’s office in Santiago, Chile