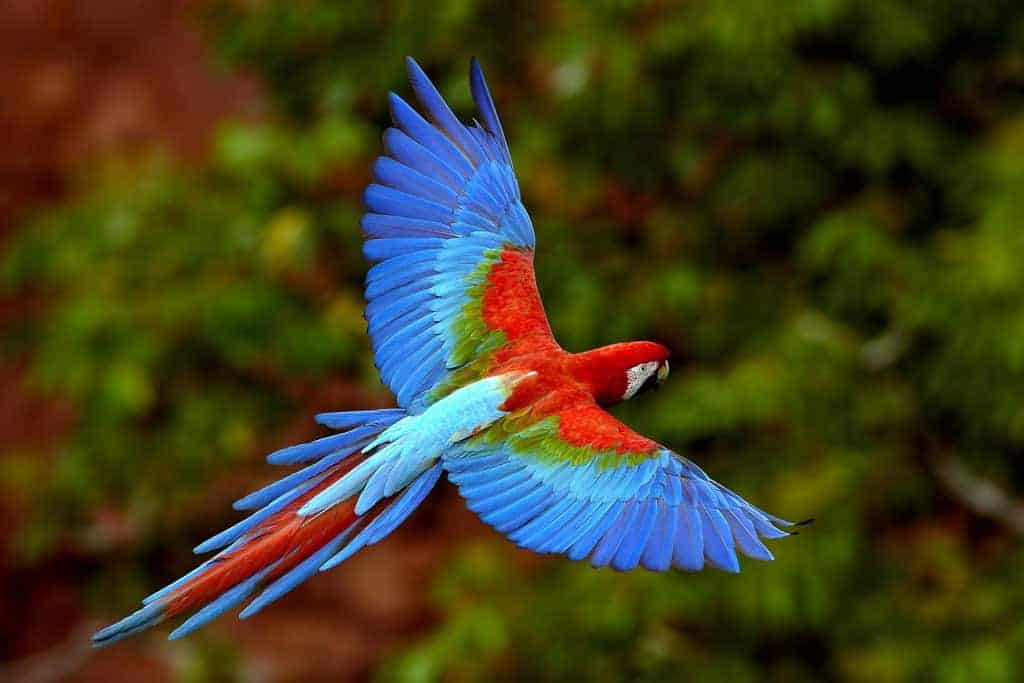 After an almost two hundred-year disappearance, the first Green-winged macaws have been released in northeastern Argentina. BirdLife Partner Aves Argentinas describes how they brought this giant of the parrot world back into their former range.

Macaws have been historically persecuted by humans because of their colorful plumage. In the province of Corrientes in northeastern Argentina, there were at least two species: the Glaucous Macaw (Anodorhynchus glaucus), which became globally extinct, and the Green-winged macaw (Ara chloropterus), which also disappeared from the region. The macaws inhabited fields with jungle-islands between estuaries, and palm and gallery forests along the waterways.

Today the only Green-winged Macaw populations close to Corrientes are more than 300 kilometers to the north in the states of Mato Grosso do Sul and Parana in Brazil, in the extreme northern Paraguay, and in southeastern Bolivia, and they are not sufficiently protected.

The Green-winged Macaw is globally listed in the IUCN Red List as a species of “Least Concern”. In Argentina it is classified as a “critically endangered” species, although there are no recent records and the species is considered extinct.

An opportunity to recover a giant of the parrot world

Because of the precarious state of the Green-winged macaw’s survival in Corrientes, a recovery project was begun. Fortunately, the Ibera Natural Reserve represents a unique opportunity to save this species because the reserve has a large area of protected habitat sufficient to allow forest islands to harbor a stable population of Green-winged macaws.

Additionally, in Ibera there are institutions and experts with experience in working with the restoration of extinct and endangered populations as diverse as the giant anteater, the pampas deer and the collared peccary.Another positive development is the growth of ecotourism in Ibera, where the presence of these birds will attract tourists, which will contribute to the development of local communities. The cultural value of Corrientes still present in artistic expressions and historical accounts has also been preserved.

From captivity to freedom

The project focuses on using captive Green-winged macaws originating from several zoos and breeding centers around the country. These birds form the “Ecological Complex of Aguará,” located in the province of Corrientes, where groups of individuals are consolidated and all health checks are performed to rule out diseases that may be spread in the wild following the release. Before their release, the birds spent several weeks in an acclimation aviary in the Cambyretá area, proving the northern access to the Esteros del Ibera.

In this aviary, the macaws learn to feed on native fruits and develop other skills for their reintegration into the wild. The birds are equipped with a small radio transmitter that allows the tracking of each individual in the field. After their release and as they expand their range, the macaws are monitored by project staff to check their adaptation to the natural environment, reproduction and long-term survival.

The power of many

The Conservation Land Trustfinancing most of the project thanks to the donation of a European philanthropist, and bringing its previous experience in wildlife reintroduction projects in Ibera. The CONICET scientists contribute their knowledge on the ecology of these birds and their reintroduction. The Directorate of Natural Resources of Corrientes provides the Center Aguará facilities, where the macaws are kept before being transferred to Ibera.

The Directorate of Parks and Reserves authorizes and supervises the proper implementation of the project on the ground. Several ecological parks, wildlife centers and zoos across the country provide the macaws to be released. Conservation institutions as Aves Argentinas (BirdLife in Argentina) and The World Parrot Trust have supported the project from its beginnings, contributing their skills and experience in the conservation of endangered species.

Finally, several groups of volunteers, including scouts, schools and club birders help to disseminate information on the project, and contribute their observations of animals in the field. Through this initiative, Argentina regains its first extinct species from the ex-situ management of wild bird specimens, and will continue working on their recovery through intensive management.

This article was first published by BirdLife International on 02 Nov 2015.