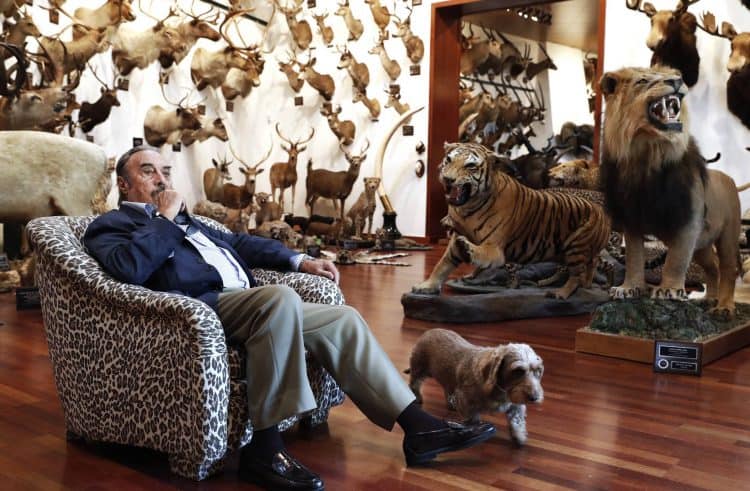 Marcial Gómez Sequeira, former president of the private health insurance company Sanitas, keeps hundreds of stuffed animals at his mansion in La Moraleja, Madrid, the wealthiest neighborhood in all of Spain.

On a sunny fall afternoon, he strolls around one of two halls used to house his trophies, explaining where each was hunted and killed. There is a leopard from Zimbabwe, a tiger from Thailand, a lion from South Africa, an ocelot wildcat from Mexico, a cheetah from Namibia and a white rhinoceros from Angola.

PUT TOGETHER, I HAVE BEEN SHOOTING FOR 24 HOURS A DAY OVER THE COURSE OF 11 YEARS AND THREE MONTHS OF MY LIFE – MARCIAL GÓMEZ SEQUEIRA

“Not even I could tell you all the animals that I have managed to hunt in the 48 years I have spent traveling the world big game hunting, but it is in the thousands, with more than 420 species,” he says.

And in a few months, he adds, his collection will be at the heart of the biggest hunting museum in the world, which is set to open in Olivenza, a village in one of Spain’s poorest regions, Extremadura.

Marcial Gómez Sequeira was, until 1988, the biggest shareholder in Sanitas, a company founded by his father Marcial Gómez Gil. In 1988, Gómez Sequeira sold his shares for almost 22 billion pesetas, the equivalent of €130 million, to the British private healthcare company BUPA.

This time last year, he was convicted of tax evasion in connection with the sale of Sanitas, sentenced to two months in prison and ordered to pay a fine of €260,000 plus €287,000 in damages to the Treasury for creating a dummy corporation in order to making illegal tax savings. “The buyers themselves prepared the sale in a way to avoid as much tax as possible, but legally,” says Gómez Sequeira. “And this comes down on me 30 years later.”

Gómez Sequeira used the money from the sale to pursue his trophy hunting. “Three years ago I tried to calculate the time I have spent hunting,” he says. “I worked out that I had been shooting for 24 hours a day over the course of 11 years and three months of my life. Firing bullets non-stop.”

As he points to a wolf from Alaska, a monkey from Cameroon, an armadillo from the US, an African golden cat from Liberia, a spotted hyena from Mozambique, a crocodile from Tanzania and a polar bear from Canada, Gómez Sequeira explains that his hunting has taken him and his 300 Weatherby rifle several times around the world. The result is a sort of Noah’s ark, only the animals are dead.

At 79, Gómez Sequeira has now decided to move his collection of trophies out of his house to save his family complications after his death. “It occurred to me to get in touch with Guillermo Fernández Vara, who is a distant cousin of mine,” he says, referring to the head of the regional government in Extremadura, of the Socialist Party (PSOE). “And it occurred to us both that we could take my hunting trophies to Extremadura and set up a museum there.”

Fernández Vara and the mayor of Olivenza, Manuel González Andrade (PSOE), have confirmed to EL PAÍS that a preliminary agreement was signed in March to set up the Marcial Gómez Sequeira Collection Hunting Museum, which aims to display 1,250 trophies inside an 18th-century building known as the Cavalry Barracks. By comparison, the collections of the Museum of Hunting and Nature in Paris, and the Safari Club International Museum in Tucson, fall short of the 420 species killed by Gómez Sequeira.

Gómez Sequeira is keen to point out that he is not a socialist. He is a Francoist and he makes no apologies for it

“Hunting is accepted as a fairly normal activity in Extremadura,” says the regional premier Fernández Vara, a doctor by trade who opts to focus on the scientific aspect of the collection. “There are a million of us and 100,000 people have a hunting license. The museum could be tremendously important for tourism.”

The preliminary agreement signed by Gómez Sequeira and Fernández Vara involves handing the collection over to a new semi-public foundation and calculating its financial value so that Extremadura authorities can invest half of that again. “The collection could be worth tens of millions of euros,” says Gómez Sequeira. “But we are being prudent and putting it at no more than €10 million to €12 million, so that the budget isn’t too much for the regional government.”

Meanwhile, the regional premier goes on to explain the family connection between himself and Gómez Sequeira. “My parents and Marcial’s parents were third cousins, but they knew each other well,” he says, adding that he referred to the Sanitas founder as Uncle Marcial. The grandfather of Gómez Sequeira was mayor of Olivenza and a landowner who, according to the historian Paul Preston, was part of the delegation that asked Franco’s forces in October 1936 to make “the socialist and communist masses give back the land that was redistributed during the Second Republic.”

Gómez Sequeira is keen to point out that he is not a socialist. He is a Francoist and he makes no apologies for it. The man who once controlled 52% of Sanitas has a sticker of the Franco-era Spanish flag on the back of his iPhone. And as he walks through the various wings of his home in La Moraleja, he points out paintings by Joaquín Sorolla and also a life-size portrait of Francisco Franco in full military attire, presiding over a billiard table. Gómez Sequeira remembers buying the painting for 25,000 pesetas (€150) after the death of the dictator in 1975 at the Durán auction house. “When Franco died, someone must have wanted to get rid of the painting because there was a lot of fear,” he says.

The first time Gómez Sequeira went on a hunting safari was in 1971 in Mozambique. He paid 60,000 pesetas (€360) and killed 35 species, including a zebra, a lion, a hippopotamus and an elephant. That was when he got the idea of collecting trophies, like others might collect stamps. “This is the collection of small antelopes,” says the man who refers to his hunting escapades as “crusades.” “That’s all of them. It even surprises me. I understand how people walking into the hall might say, ‘Bah! You can’t have been able to hunt all this by yourself.’ And yes, that makes sense because I myself have my doubts. It seems impossible that I could have killed all these animals, but that’s 48 years’ worth, hunting on three or four safaris a year.”

Gómez Sequeira, who studied medicine before becoming an entrepreneur, goes on to explain that over the course of 10 years he owned four planes. “One at a time, of course, each better than the last,” he says. “I hunted a lot. I went to London, I went up to the Arctic, I went to Finland, Greenland; I crossed the whole of Canada and reached the Bering Strait. I went to the United States and spent time with some friends to a ranch I co-owned in Texas. And then I returned via the Azores. It was a very long trip but very productive.”

The latest trend among international hunters is paying to kill animals of unusual colors. In South Africa, the owners of ranches auction off uniquely colored members of any one species after raising them in captivity. Gómez Sequeira went on one of these “color safaris” as he calls them in 2018 with his 15-year-old grandson. He killed a golden wildebeest, a black impala, a golden oryx and a copper-colored Springbok.

“Four years ago, it cost €30,000 to €40,000 to kill a golden wildebeest. Now you can do it for a reasonable price,” says Gómez Sequeira, stopping beside a golden wildebeest that looks all but alive as it stands in a state of suspended animation on top of two fruit boxes. “Hunting one of these animals can now cost between €6,000 and €10,000.”

Recalling how he shot the animal, Gómez Sequeira says that it was lying down behind a termite mound. He waited until it got up before shooting it broadside to make sure he didn’t damage the horns. “I usually aim at the armpit area because that can be perfectly repaired afterwards,” he says. “The point where the bullet enters is very small and where it comes out, if it does, gets very damaged but it can be sewn up quickly,” he explains, showing the spot on his own torso where the bullet enters before reaching the heart.

Gómez Sequeira’s hunting anecdotes are peppered with recognizable figures. “When I arrived in Persia in 1973,” he says, “I went to the Shah’s hunting reserve. And who was there but [former Spanish]King Juan Carlos, who had been invited by the Shah’s brother. Juan Carlos is two years older than me. He was born in 1938 and I was born in 1940. We have had a great friendship and I admire him a lot. He has also received me as a director of Real Madrid when we won the trophies that he handed out.Juan Carlos is a great partridge hunter. I have hunted with him quite often.”

Gómez Sequeira sat on Real Madrid’s board of directors during the presidency of Ramón Mendoza and Lorenzo Sanz. In 2006, he put himself forward again as a candidate together with the constructor Juan Miguel Villar-Mir. “Legally, we won,” he says. “But Ramón Calderón robbed us of that,” he adds, referring to the election fraud scandal when Calderón, former Real president, asked for postal votes to be discounted. “He got the kind of female judge that is as quick to say that Franco’s body has to be exhumed as that postal votes don’t count.”

King Juan Carlos is among the acquaintances who have visited his hunting trophies in La Moraleja, according to Gómez Sequeira himself, who is now sitting between a stuffed lion and a tiger. “I have had government leaders from Spain and other countries here,” he says. “But I’m not a slaughterer. I don’t hunt for numbers; I prefer quality, specialties.”

Last February, a US trophy hunter paid $110,000 to kill a rare protected mountain goat in Pakistan, one that is absent from Gómez Sequeira’s collection. “I’m not going for it because it costs €100,000 and the circumstances are not right,” he says. “I realize that I’m old and that there is little hunting time left in me and, more importantly, the strength to go out in the countryside and keep shooting. But I’ll keep hunting as long as my body holds up.”

This article was first published by El Pais on 9 October 2019.