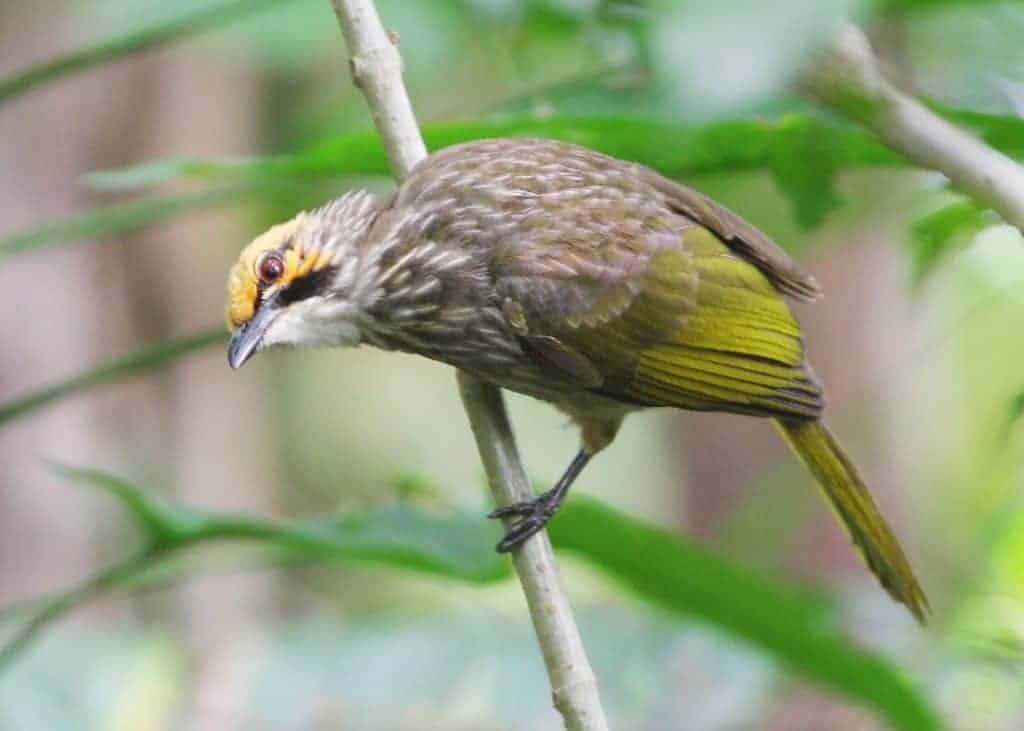 The Straw-headed Bulbul Pycnonotus zeylanicus perhaps isn’t much to look at (at least compared to some other birds of South East Asia), but no-one can deny it has a great set of lungs.

But unfortunately, it’s this same rich, powerful melody which is threatening to silence the species forever. As we reported during our 2016 Red List coverage, keeping songbirds as pets is an integral part of South-East Asian culture. In Indonesia in particular, streets are lined with chirping cages, and songbird contests are big business.

But as the streets grow louder, forests are falling silent. The widespread trapping of wild songbirds to meet demand for local bird markets, is driving many species endemic to the area towards extinction – with the prized Straw-headed Bulbul one of the more badly affected.

“Across much of Southeast Asia, the Straw-headed Bulbul has been relentlessly trapped from the wild to be later sold in the bird markets of Java, Kalimantan, Sumatra and Peninsular Malaysia,” says Yong Ding Li from The Australian National University. “The bird has gone extinct from Thailand and most parts of Indonesia where it used to be found, including the whole island of Java. Its populations have also collapsed across Malaysia.”

Hunted to extinction in Thailand and large parts of Indonesia, the Straw-headed Bulbul is in danger of disappearing forever

However, there is one small haven where the Straw-headed Bulbul’s presence isn’t just stable, but actually growing louder: Singapore.

This is according to findings from a recent study led by Ding Li, and published in the journal Bird Conservation International. The study saw authors from The Australian National University and Nature Society (BirdLife in Singapore) gather data from more than 15 years of the Annual Bird Census, a yearly bird survey organised by Nature Society.

Check out its song in the video below (© Lena Chow):

The result was an encouraging discovery: wild populations of the Straw-headed Bulbul have steadily risen in Singapore over that time period, and the country is now something of a global stronghold. Indeed, Singapore might now harbour more Straw-headed Bulbuls than anywhere else on the planet.

The increases were not noted on mainland Singapore, however, where populations merely remained stable – although given the Straw-headed Bulbul’s plight elsewhere, even this is a big win. Rather, the increases were documented on the small island of Pulau Ubin, situated north-east of mainland Singapore, and one of the country’s last remaining rural areas. Here, the species’ population increased by nearly 4% a year.

At a conservative estimate (some areas of western Singapore could not be comprehensively surveyed due to limited access), Singapore is today home to at least 200 individuals. Furthermore, new sites have been discovered very recently. With global estimates ranging from 600-1,700 individuals, and trending downwards, Singapore could be harbouring over a third of the world’s remaining Straw-headed Bulbuls.

On mainland Singapore, the bulbul persists in pockets of woodland such as Bukit Brown cemetery and Khatib Bongsu, both of which aren’t part of the current reserve network.

“More should be done to protect such places which are currently outside the existing reserve network,” said co-author Dr Ho Hua Chew from the Nature Society (Singapore), who is also vice-chair of its conservation committee. “Other biodiversity could also benefit from the conservation actions targeting the bulbul.”

The study offers further evidence of the value of citizen science. Without the hard work of volunteers, conservationists on the island would lack the data to determine which habitats are most vital for rare species such as the Straw-headed Bulbul, which has declined so dramatically in recent years that BirdLife uplisted its threat status from Vulnerable to Endangered in the 2016 Red List.

“Citizen science efforts to monitor wild bird populations in Singapore, including the Straw-headed Bulbul, have been led by the Nature Society’s Bird Group since 1986,” says co-author Lim Kim Seng, coordinator of the Annual Bird Census. “On a predetermined morning, scores of enthusiastic members will sacrifice sleep to be out in the wild at their assigned sites, counting birds for the census. Over the last two decades, these censuses have allowed us to track population trends of threatened species such as the globally endangered Straw-headed Bulbul.”

So while Thailand and parts of Indonesia may already have had their last Straw, at least in one small corner of Southeast Asia, the Straw-headed Bulbul can still be heard loud and proud.

This article was first published by BirdLife International on 23 Feb 2017.