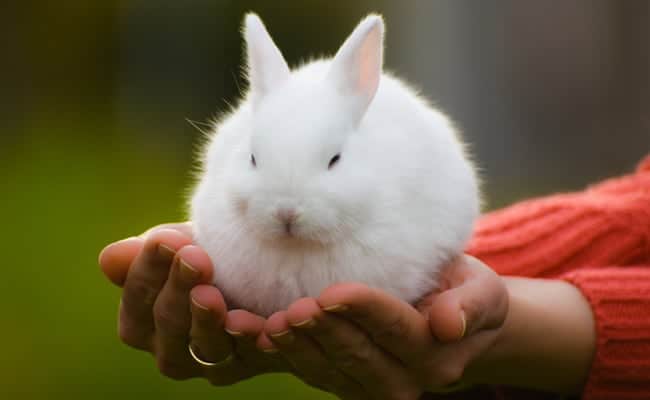 While animal advocates continue to work towards a world where animals aren’t used as test subjects in labs for any reason, there’s now renewed hope that the U.S. could soon end the senseless suffering caused by testing for cosmetics.

This week, members of Congress reintroduced the Humane Cosmetics Act, which will make it illegal to conduct or commission animal testing for finished products and ingredients, in addition to banning the import of products that have been tested elsewhere.

“The cruelty animals are subjected to during cosmetics testing is unacceptable―from lethal dose tests to irritation and force-feeding tests. Not only are these tests inhumane, but modern technology makes them unnecessary and overly expensive,” said Rep. Martha McSally.

“The cosmetics industry is already using alternative cutting edge testing methods that are safer, cheaper, and don’t hurt animals. It’s time the United States join the ranks of over 30 other countries in the developed world to stand against this vile practice. The inhumane treatment of animals serves no place in our society.”

Even though animal testing is not required by the Food and Drug Administration (FDA) or the Product Safety Commission in the U.S., and despite the fact that alternatives to animal testing currently exist, many companies continue to test their products and ingredients on animals, while the FDA leaves it up to them to substantiate the safety of their own products and recalls are left entirely up to manufacturers.

More concerning is that even products that are labeled as “not tested on animals” or “cruelty-free” may, at the ingredient level or at certain stages of development, have been tested on animals by other companies,making it confusing and frustrating for people who are trying to make compassionate choices.

Because the Animal Welfare Act does not require that all laboratory animal use in the U.S. be reported we may never know exactly how many animals have needlessly suffered and died behind closed doors just for the sake of a new product, but numbers are estimated to be in the millions.

Fortunately, nations around the world are turning against the practice, and hundreds of companies have proven they can make safe products without causing harm.

Banning the practice will do more than just end the suffering of animals used in painful tests, it will also encourage the continued development and validation of more alternatives that are cheaper, faster and more reliable, in addition to helping cosmetics companies in the U.S. stay competitive in a global market that continues to move towards mandating cruelty-free alternatives.

According to lawmakers, out of the 13 biggest importers of cosmetics from the U.S., eight countries either already have bans on cosmetics tested on animals in place, or are considering legislation that would ban them.

“Congress should permanently end the painful and unnecessary process of testing cosmetics on animals in this country,” said Rep. Don Beyer (D-VA). “The cosmetics industry already has safer, more cost effective methods of testing that do not harm animals. American companies face no economic risk from this legislation, which would also show moral leadership.”

This legislation already has bipartisan support lawmakers, and the endorsement of more than 195 cosmetics companies, but it needs our support.

Please show your support by signing and sharing the petition asking Congress to pass the Humane Cosmetics Act.

To find cruelty-free personal care products and cosmetics already on the market that have been certified by the Leaping Bunny program, check out Cruelty Free International.

Then the US needs to work on a ban on animals like Trump !

Hope this carries through to a ban.

Just read that L’Oreal Cosmetics has finally caved to give attention to a lab produced form of human skin to replace the live animals they still use. Yes, cosmetics testing is the least defensible use for animal abuse but every toxic substance in today’s world continues to be tested on animals.