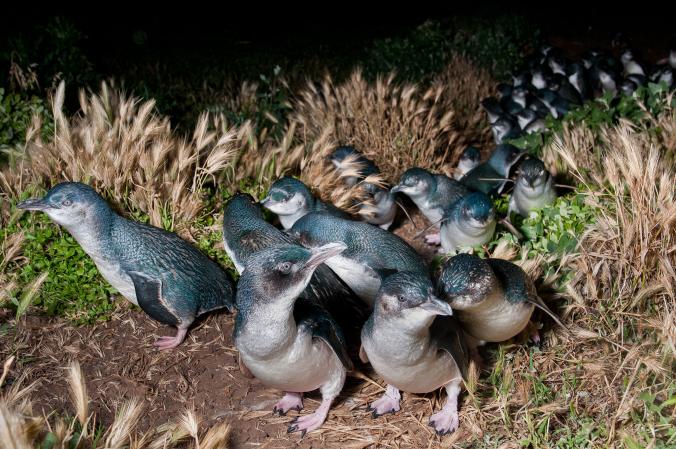 The world’s tiniest penguin may be in big trouble. Warming ocean waters could make finding food increasingly difficult for the little penguin, Eudyptula minor, which stands less than a foot (0.3 meter) tall.

Because their prey is sensitive to heat, “we’re seeing that warm years are quite bad for the penguins, and it’s not hard to see that if the temperature keeps going up, things might get worse,” says Gemma Carroll, a graduate student at Macquarie University in Sydney.

Though perhaps not as beloved as koalas or kangaroos, little penguins are some of Australia’s most charismatic creatures.

Many live in island colonies along the country’s eastern and southern coasts, where tourists delight in nightly penguin parades as the birds waddle up on shore.

But in general the creatures are homebodies, venturing out from their colonies mainly to hunt fish.

Concerned about declines in populations of little penguins—also called fairy penguins—over the past few decades, Carroll has been visiting and tracking a group of birds on Montague Island for three years. She presented her results this week at the American Geophysical Union’s Ocean Sciences meeting in New Orleans.

Life for little penguins is made possible by the East Australian Current, a great rush of water from the tropics that stirs up the seafloor in the spring.

Plankton feed on a swirl of nutrients from the bottom, becoming in turn a meal for bigger critters in the local food chain. This banquet of life nourishes the sardines on which little penguins dine.

The East Australian current has been strengthening as temperatures in surface waters it feeds have climbed more than 2 degrees Fahrenheit (1.1 degrees Celsius) over the second half of the 20th century, which is thought to be connected to climate change. That’s much faster than the global average for sea surface warming. (See “Penguins That Weathered Past Climate Change Suffer This Time.”)

Concerned about this influx of heat, Carroll strapped GPS sensors to about 60 wild birds from 2012 to 2014. She also outfitted them with accelerometers that detected their body movements.

A computer program based on data from captive birds at the Sydney Zoo deciphered those movements, flagging each time a wild penguin caught a fish.

Penguins prowling for fish, the data showed, tended to shy away from warmer waters. “Penguins always seem to make a beeline for waters that are cooler” and likely to have more fish.

In warmer years, moreover, the penguins caught fewer fish in November and December, during the Australian summer.

“The fish have a very narrow preference for temperature,” she says.

She cautioned that more work remains to be done, and that climate change is not the only threat facing the penguins.

Others include human activities, as well as booming predator populations such as native seals and animals introduced by people, including cats, dogs, and foxes.

Dee Boersma, a conservation biologist at the University of Washington in Seattle, has recorded declines in Magellanic penguins in Argentina, partly due to them having to travel farther to find food.

“I wouldn’t say which factor [threatening penguins] is the most important,” says Boersma, who wasn’t involved in the new research.

“But climate change is going to be a big problem for penguins.”

This article was first published by National Geographic on 24 Feb 2016.