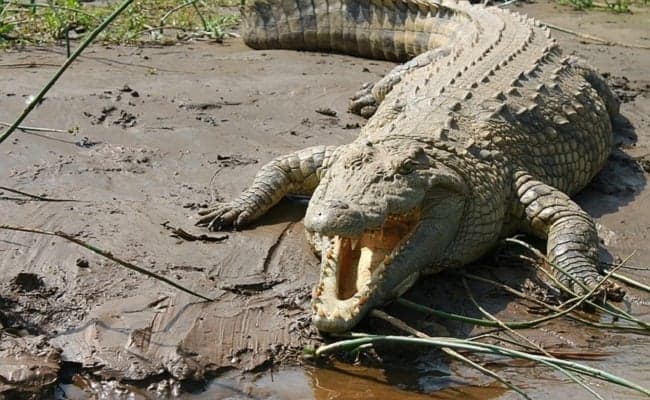 Scott Van Zyl was the owner of SS Pro Safaris, a South African canned hunting facility that also organized trips to Africa so trophy hunters could kill magnificent animals and display them in their homes.

In a weird twist of fate, Van Zyl became the hunted earlier this month during a Zimbabwe safari. After he separated from a local tracker and approached the shore of the Limpopo River, he was eaten by crocodiles.

Unfortunately, three crocodiles had to die as well. The tracker had become concerned when Van Zyl’s dogs returned to the campsite without him. A few days later, searchers found Van Zyl’s footprints and backpack on the river bank, but divers and helicopter pilots were unable to find his body in the river.

“Permission was given for three Nile crocodiles in the area to be shot, and one of them contained Mr. Van Zyl’s remains,” Sakkie Louwrens, director of the Heritage Protection Group (HPG), a South Africa-based nonprofit that investigates, fights and prevents violent crimes, told the BBC. “Subsequent DNA tests have proved the remains to be those of Mr. Van Zyl.”

An investigation is underway to determine exactly how Van Zyl died. At least four people have been killed in Zimbabwe by crocodiles in the past year. Due to the unusually heavy rainfall, crocodiles have been moving away from rising rivers.

“Our hearts go out to Scott’s wife and their two children,” said Phillip Bronkhorst, chairman of the Limpopo Hunters Forum. “Scott will be remembered for the passion he had for his profession and life in general.”

He may have had a passion for his profession, but it’s really difficult to understand how someone with a passion for life in general would have been willing to facilitate and profit from the killing of hundreds of animals.

“From elephants in Botswana to the smallest blue duiker in KwaZulu Natal, we do it all,” boasts the SS Pro Safaris website.

In a disgusting and graphic video — be warned that it’s really more like a snuff film — Van Zyl posted on YouTube in January 2016, various leopards are seen being shot to death on his “hunting preserve” – including one big cat as he innocently approaches his dinner.

First bull for the season…

But in Montana, where he shot them, the state Department of Fish, Wildlife and Parks lists them as a species of concern due to their decline in number. Prairie dogs are also an important part of the ecosystem: More than a hundred other animals depend on them for food or live inside the burrows they’ve created.

Not surprisingly, a recent study by Humane Society International found that trophy hunting in Africa does very little to help local economies.

As for the Nile crocodiles Van Zyl had intended to kill, they are considered the most dangerous type of crocodile, with the strongest bite in the animal kingdom. But are they any scarier than humans who want to kill animals only for sport?

With Van Zyl now resting in peace, hopefully SS Pro Safaris will be shut down so more animals can continue to live in peace.