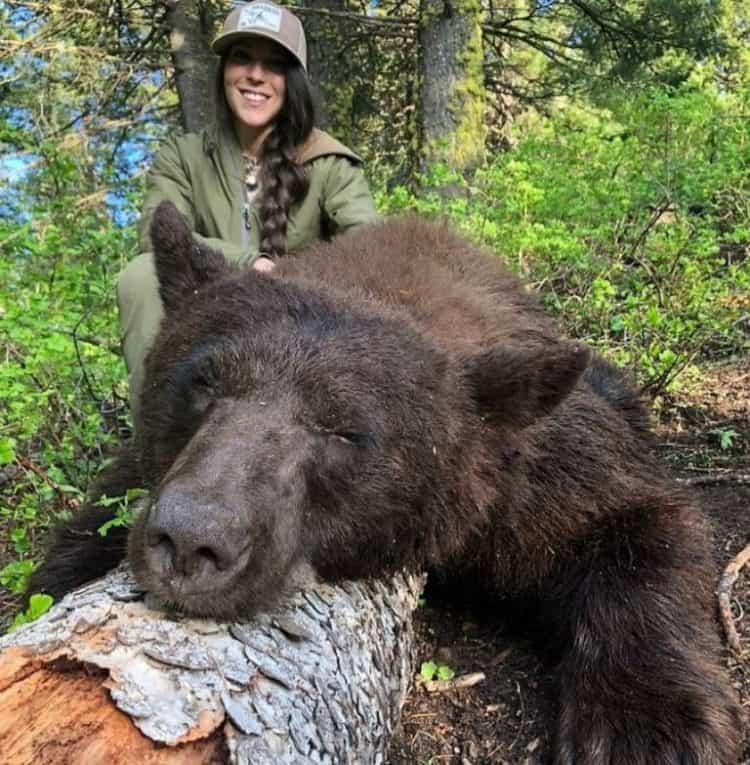 A nurse reveals that she receives threats of rape and murder after sharing pictures of wild animals she’s hunted on social media.

Kate Small has killed a number of different wildlife species including hogs, deer, wolves and bears in her hometown of Boise, Idaho and even internationally in South Africa. She frequently posts pictures of herself posing next to their carcasses to her 27,000 Instagram followers.

The 29-year-old enjoys spending days out in the countryside hunting. Her biggest victim so far was a 6ft black bear weighing more than 350lbs.

She says the most difficult animal she’s ever hunted was a wolf, because of the creature’s heightened senses and sheer speed, which allows them to travel miles and miles in the space of a day.

Small is a passionate hunter and she’s spent 10 years killing animals and hopes to introduce her baby daughter Finley into the ‘sport’. She claims to hunt in an ‘ethical way’, only killing animals for food or ‘conservation’ and she wants more women to get involved.

Small explained her rationale for hunting:

This lifestyle also lets me create everlasting memories with my friends and family.

Even if I am unable to harvest an animal, memories made on a mountain, battling the elements and being pushed to your limit are invaluable. It’s a true test of your inner strength and character.

I salvage as much of the animal as I possibly can. I always keep the head and hide for mounting. The meat is what we live off of, we butcher it ourselves and then we will eat it the rest of the year.

Aside from wolves, as they carry parasites that are dangerous to eat and the meat is bad, I don’t hunt anything I won’t eat. I never take an animal for fun, it’s for food or for conservation.

However, Small’s argument hasn’t convinced everyone. She’s received thousands of death threats online, with people even targeting her dog and her one-year-old daughter.

I have actually received thousands of death threats. People saying things I’d never wish on my worst enemy. I’ve had hundreds of people also threaten to rape and murder my one-year old daughter. I recall one person saying, ”I’m going to put your baby in a blender and listen to her scream”.I’ve also had people say they are going to murder my dogs, which just doesn’t make any sense to me, you’re mad that I killed an animal, so you’re going to kill an animal.For the most part I try to use education and explain why I do what I do but I must admit sometimes my sarcasm gets the better of me and I respond with humor. I usually laugh the death threats off, if you are threatening someone who hunts apex predators for a living, you mustn’t be very bright.

Despite her critics, Small claims hunting certain animals is kinder than allowing them to die from natural causes.

Those that I know who hunt, including myself, have an immense respect for animals and care deeply about them, that’s another reason why we do what we do.

Every year fish and game [authorities] comes out with new quotas specifying what and how many of each species in each particular area can and should be hunted. These quotas are based on scientific research to help keep the populations at their healthiest.

Hunting helps these animals combat spread of disease and competition for food. I know people think hunting is cruel, but it isn’t, you know what’s cruel? Mother Nature. Have you ever seen an elk get half eaten by wolves and suffer for hours while it slowly and painfully dies?

Have you ever seen a mule deer gradually waste away and eventually die of starvation? I don’t know about you, but to me a single shot to the vitals sounds like a much better way to go.

This article was first published by Wildest on 11 September 2019.