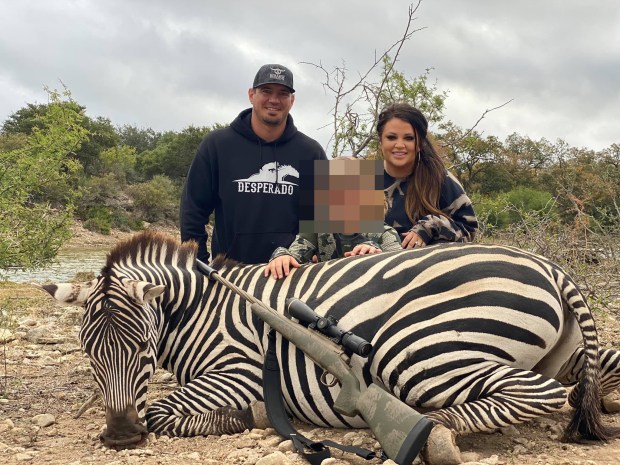 EXCLUSIVE: Website BookYourHunt has up to 5,000 hunts available and prey includes zebras at a starting price of £743 for a killing spree and Cape buffalos at £2,283

Almost all the animals on BookYourHunt are exempt from forthcoming UK legislation aimed at banning the import of hunting souvenirs such as skins, antlers and heads.

They are not considered sufficiently at risk of extinction to make the Government’s designated categories of species to be covered by the new law.

But all are on a “red list” compiled by global animal rights body the International Union for the Conservation of Nature which considers them near threatened or vulnerable.

Others on the hunt list include camels, kangaroos and even sheep.

Eduardo Goncalves, founder of the Campaign to Ban Trophy Hunting, said: “This is a click-to-kill catalogue which sick psychos browse before choosing a defenceless animal to shoot for fun.

“It’s a one-stop snuff shop for hunters who love to kill for thrills. There’s something for every animal murderer.”

Explorer Ranulph Fiennes said: “This is the most hideous website I have ever heard of. It’s advertising animals like you’re doing a weekly shop, except the photos show bloodthirsty psychopaths grinning moronically over the dead animals they’ve killed for fun.

“Trophy imports like these should be banned, they’re an absolute disgrace.”

MPs are signing a cross-party Commons motion to press ministers to include less endangered species in the new law – and jail time for offenders.

Tory MP David Amess, who is behind the move, said: “We should ensure all animals are protected from those who take pleasure in killing them for entertainment and furnishings. We must settle for nothing less than a total ban.”

Labour environment spokesman Luke Pollard agreed: “If the ban only covers lions and elephants and doesn’t include zebras and other species it will simply displace the cruelty from one species to another.”

Campaigners are trying to close another loophole that would allow hunters to import trophies of threatened animals like lions and elephants in return for a “conservation exemption” fee.

Mr Reed claimed that hunting deters human encroachment on animal
habitats and overgrazing by livestock which would “decimate” land.

He said: “The loss in revenue from diminished hunting opportunities would increase poaching and cause anti-poaching efforts to cease due to lack of funding by trophy hunting.

“On the surface it is easy to let emotions rule when in reality such bans lead to decreased wildlife and habitat.”

This article was first published by The Mirror on 22 May 2021. Lead Image: A worker at the Ox Ranch in Uvalde, Texas, said British hunters often visit – Credit: sean rayment.