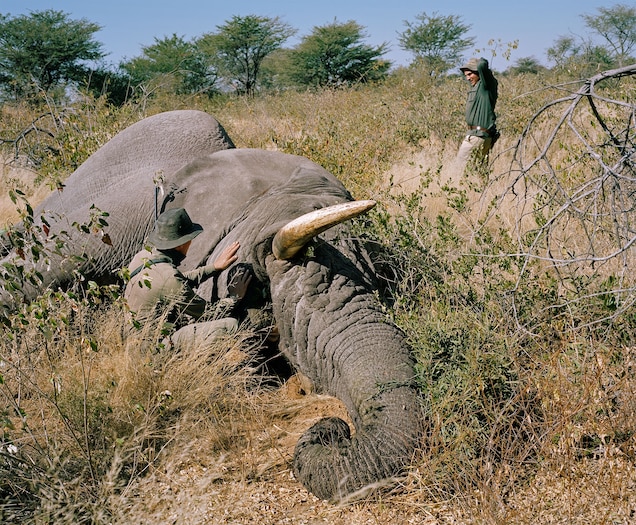 Trophy hunters, as well as poachers who “harvest” the big males—antelopes and deer with the largest horns and antlers, elephants with the longest tusks, or lions with the most impressive manes—are putting those species at greater risk of extinction with climate change.

That’s the finding of a new study published today by researchers at Queen Mary University of London, England, in Proceedings of the Royal Society B: Biological Sciences. “Trophy” animals tend to be the most evolutionarily fit and possess the high-quality genes a population of animals need to adapt quickly to a changing environment, says evolutionary ecologist and lead author Robert Knell. “They also father a high proportion of the offspring. But if they’re killed before they can spread their ‘good genes’ around, this reduces the overall fitness and resilience of that population.”

When environmental conditions change—a shift in seasonal rainfall or warmer temperatures—the risk of extinction increases dramatically, even with a healthy population of animals apparently unaffected by trophy hunting, Knell says.

“The results were very, very clear.”

This can happen even with an annual harvest rate as low as 5 percent of the high-quality males. With environmental change now a reality across the globe, the study shows that some animal populations facing even relatively light hunting pressure are more vulnerable to extinction than is generally believed, Knell says.

This also means poachers are even more of a threat since they target big males but also indiscriminately kill any individual they believe will profit them, he says.

The study also shows that restricting the take to older trophy males means that they will have had time to spread their good genes around, which should help populations adapt to environmental changes.

“When properly regulated, trophy hunting can be a powerful force for conservation, which is why we’re suggesting a different management approach as opposed to calling for a ban,” Knell says.

In an email Rosie Cooney, of the International Union for Conservation of Nature, which sets the conservation status of species, called the study interesting, “with obvious relevance to trophy hunting management, highlighting that there may be a need under climate change scenarios to shift to age restrictions as a basis for management.”

“This study matches up with the empirical work we’ve done on bighorn sheep in the Rocky Mountains,” says David Coltman, professor of biological sciences at the University of Alberta. Coltman’s studies have shown that decades of trophy hunting have resulted in a 20 percent decline in the size of ram’s horns in today’s sheep.

We also know that sheep with the biggest horns produce the largest offspring, and losses of them all contribute to a decline in the fitness of the overall population, Coltman says.

Horns aren’t ornaments. They’re a signal of fitness. The biggest horns that trophy hunters crave are likely found only on the highest-quality individuals, he says. This is an example of human selection leading to artificial evolution.

Hunters argue that the funds from their hunts—estimated to be anywhere from $132 million to $436 million in Africa annually—gives local communities an incentive to protect wildlife as well as fund conservation efforts and community development. Many conservation groups, on the other hand, argue that oftentimes the fees trophy hunters pay are actually siphoned away by corruption and mismanagement.

The latest trophy hunting controversy came on November 14, when the U.S. Fish and Wildlife Service announced it would be lifting the ban on trophy imports of elephants killed in Zimbabwe and Zambia. There was an intense backlash, and within three days President Donald Trump tweeted that the Department of the Interior, which oversees the Fish and Wildlife Service, would reevaluate the decision. In a follow-up tweet he wrote, “[The department] will be “hard pressed to change my mind that this horror show in any way helps conservation of elephants or any other species.”

Sustainable sport hunting is important for raising conservation revenue in many areas, but this study tells us we must be mindful of our evolutionary impact, said Adam Hart, professor of science communication at the University of Gloucestershire, England, in an email. “As always, conservation is more complex than it can appear.”

This article was first published by National Geographic on 28 Nov 2017. Lead Image: Big tusks on an elephants indicate well-being, which in turn signifies that they have high-quality genes that help them adjust to a changing environment. Elephants with big tusks are also the target of trophy hunters, but removing those genes from their populations could lead more quickly to extinction.Photograph by David Chancellor, National Geographic Creative.